Bryan Burhans is the president of The American Chestnut Foundation, an organization solely devoted to restoring the trees to their native habitat. He told Brendan all about his nutty project.

Bryan Burhans: The American chestnut: It’s a hardwood tree. There’s a large range about 200,000 million acres from Maine to Florida over to the Ohio River Valley.

Unfortunately, when the blight came into the United States accidentally, probably at the end of the 1800s, the chestnut, probably within 40 to 50 years, was removed from our forest as a dominant tree.

Brendan Francis Newnam: So tell me about the blight. What happened?

Bryan Burhans: Well, sometime in the late 1800s, this fungus was introduced accidentally, probably within the New York region, because we first identified the fungus in the Bronx Zoo. That was in 1904. By 1950, the chestnut blight made its march clear down the entire range.

Brendan Francis Newnam: Chestnuts must have remained in the American diet a little bit in the 20th century, because the song that inspired me to go searching for chestnuts was written in the 1940s.

Bryan Burhans: A lot of our folklore and a lot of our history does come from the days when chestnuts were very common.

People would collect these nuts, load them on railroad cars and then ship them to major metropolitan areas — Baltimore, New York, other cities — and you would have street vendors that would roast these chestnuts and sell them.

We still had other species of chestnuts — from Asia, for example — that were planted in the United States and probably did provide some chestnuts. But the availability of American chestnuts basically went from ubiquitous to near zero.

Bryan Burhans : The difference between the American chestnut and the other chestnut species that come from Asia are night and day.

The American chestnut is a wild tree that would grow as tall as any tree in our forest. In fact, we have records of chestnuts reaching 14 feet in diameter.

Bryan Burhans: It often is referred to as the “Redwood of the East.” This is a massive tree that provided food and lumber. It provided wild habitat.

Those other chestnut species were developed shorter, with larger crowns, because they were designed for nut production. People have tried to put those in our wild forests. Our forests are very aggressive growers and those species die out very quickly, because they become shaded by the other forest tree species.

There is plenty of Chinese chestnut throughout the eastern United States and the nuts are perfectly good to eat, although a little different from American chestnut.

Brendan Francis Newnam: So, tell me about the American Chestnut Foundation. When did it start, and what’s it all about?

Bryan Burhans: The key in our mission is to restore the American chestnut species back to our forest.

It was started by a group of scientists and an attorney in Minneapolis. Another individual that was key — probably an individual that most of us know — was Norman Borlog, a Nobel Peace Prize winner.

Basically, they were told that this won’t work. You can’t do this, the chestnut is lost. And they said, “You know what? If we can do it in corn, we can do it in wheat, then we can certainly do it in a tree. It’s just going to take a lot longer.”

And that’s just what they did. They devised a plan, put the plan in action, and we’ve been working on that plan for 30 years.

Brendan Francis Newnam: So how’s it going? What’s been happening in the 30 years that you guys have been around?

Bryan Burhans: Currently, we are at our testing and evaluation stage. We spent 30 years developing this tree. Now we are working with fellow scientists, universities and forest services to plant in the forest and to closely monitor how they do over time.

Brendan Francis Newnam: It sounds like the foundation was created to restore this tree in America, and one of the secret weapons is that chestnuts taste good. Are you hoping that, if that catches on, that will help the future of this tree? 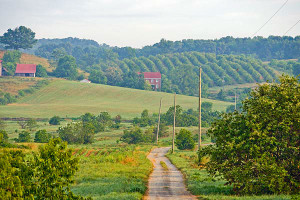 Brendan Francis Newnam: Maybe you guys need a baby chestnut tree cam, because that worked for the panda.

Bryan Burhans: That is true. We have Charlie Chestnut, which is an education program that we use to teach kids about the chestnut. He’s a cute little bugger.