Radio host and noted cat-person Rico Gagliano was very excited to visit an original cat cafe in Tokyo on a recent trip. He took quite a few adorable photos – so pop over to our Tumblr for a collection of those. Because cats. And the internet.

Rico Gagliano: Why did you want to open this place?

Nadine Spencer: It is something that is bound to do well, seeing as there are many people who come here either just for school, for a very short period, or there are a lot of landlords that just don’t allow pets in homes.

Rico Gagliano: I see. So students, obviously, they can’t get a pet because they’re not around full-time.

Nadine Spencer: Exactly. Also elderly people can’t always take care of pets on their own either. We wanted to reach out to pet lovers that didn’t have the option of having one of their own or that just wanted to have some company from some other fantastic felines.

Rico Gagliano: Let’s talk about these felines. Where do the cats come from? Are they lent by owners? Does the shop own them and care for them after hours?

Nadine Spencer: They’re our little kitties. We actually adopted all of the cats from the ASPCA. So they all are rescue cats and we gave them a second chance.

Rico Gagliano: Obviously you can get rescue cats that have serious problems. How did you screen these cats? What are you looking for in the perfect cafe cat?

Nadine Spencer: Well, they did the first choice for us. And from those that were chosen, we went and picked the ones we really fell in love with, that we saw had a good character, super friendly. And, from there, once we had chosen all eight of our cats – we have eight – we kept them in quarantine for about a month and a half, to make sure that they were all healthy, that there were no issues, and that they were all friends with one another.

Rico Gagliano: Yes, I was going to say, that’s the other thing. Ironically, the two things I know, as a cat lover, is that a lot of cats are very shy around lots of strangers and also have a hard time around lots of cats. Sort of exactly the situation you’re putting them in.

Nadine Spencer: Oh, no. Everybody has just been commenting on how amazing the cats are. They’re really exceptionally friendly. They love people. They love playing – and when they don’t feel like doing so, they can just kind of go off and do their own thing. It is their home, after all, and we do have a little, I guess you could say ‘bedroom,’ cat room, that we built specially in the location, so if ever they don’t feel like being social, they can go and just hang out in there.

Rico Gagliano: They can take a time out.

Nadine Spencer: A time out. There you go. 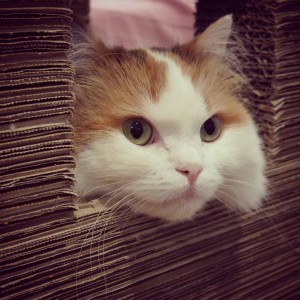 Rico Gagliano: So, then, is it possible I could go to the cat cafe and there just aren’t any cats because they’re all just, like, “I’ve had enough for today”?

Rico Gagliano: There has never been a cat cafe like this in North America. What was the reaction of, say, food safety and animal safety officials when you applied for the business license?

Nadine Spencer: Well, it was all as new to them as it is to us, so it definitely took a little bit longer for them to come up with the rules and regulations. One of them being that the kitchen cannot be in the same area as the cats.

Rico Gagliano: I was going to ask you about that!

Nadine Spencer: No fur in the paninis.

Rico Gagliano: Fur would be the least of my worries.

Nadine Spencer: Amongst other things. But they do their little business also in their bedroom, so that’s behind a curtain, closed off from the public as well, so nobody has to smell any smelliness.

Rico Gagliano: We are talking about the cats and making sure they don’t effect the health of the humans, but what about the other way around? You can get crazy cat people. How do you screen the humans?

Nadine Spencer: There are rules that are set in place. There’s no picking up the cats unless one of the staff members hands them to you. There’s no feeding the cats. Obviously no rough and tough with the kitties. And if they’re sleeping, by all means, they have to be left to sleep.

Nadine Spencer: It is! I’m missing them being away from them right now.

Rico Gagliano: I do have to ask, it does make me wonder, the draw of this place obviously is the cats. Why even offer the cafe part of it? Couldn’t you just have a vending machine in the corner and still plenty of clientele?

Nadine Spencer: People like to eat. We keep our menu very basic. We have paninis, croissants, chocolatines, pastries, but nothing extravagant on the menu. We really wanted to focus on the coffee, and the kitties mores than anything else.

Rico Gagliano: It is kind of a genius move, right? I mean, if there are two things that are probably booming, thanks in part to the internet, it’s coffee culture and cat culture.

Nadine Spencer: Exactly! So we hit them right on the nose.

Rico Gagliano: My god. You’re just going to be rolling in dough. I’m just glad to meet you before you’re a snooty millionaire. You have been open a week. What has surprised you so far, Nadine? About the customers or…?

Nadine Spencer: Well, actually, today is only our third day of business. The line down the street on Saturday! But everybody has really just been saying how amazing they find the cats. They’re very soft, so everybody’s been asking, “What do you do to their fur?” We feed them Royal Canine, which is an amazing brand, so they definitely get the best nutrition and I think it must definitely come from that, because they are soft, soft as can be.

Rico Gagliano: Of the eight cats, is there one that’s maybe the star?

Nadine Spencer: I would definitely say they all have characters. King Kong is the eldest, the godfather, he’s five and a half, and he’s massive. Large and in charge, if you will, but also one of the gentlest cats I’ve ever met in my life.

Nadine Spencer: It suits him. If you go online on our Facebook page, you’ll see pictures and you’ll know what I mean when you take a look. We have Bigfoot, who is a polydactyl.

Rico Gagliano: That means they have thumbs, kind of.

Nadine Spencer: Yeah! Mitten thumbs! And I think he is the one in charge right now. He’s kind of taken control of things, watching over all the cats and keeping them in order.

Rico Gagliano: Because, you know, obviously, he is evolutionarily… He could grow to be able to use tools. It’s scary.

Nadine Spencer: Exactly. We had to actually, the door knob, instead of putting it to turn down, we had to put it to turn up, to avoid any kitty escapes, and he was one of the ones we were worried about.

Rico Gagliano: Sure. You could have a “Dawn of the Planet of the Apes” uprising going on.