“Madam: A Novel of New Orleans” is the first novel from non-fiction author and journalist Cari Lynn. With her co-author Kellie Martin, Lynn tells the tale of Mary Deubler — a real-life woman in New Orleans at the dawn of the 20th century.  Deubler grew up poor, but reinvented herself as Josie Arlington, one of the most powerful madams in the legal red-light district called “Storyville,” while jazz, voodoo and history swirled around her.

Hi, my name is Cari Lynn, and I co-authored a book called “Madam.” It’s based on the true story of Madam Josie Arlington. She ran a very tight ship in her bordello, but in this scene her piano player Ferdinand watches… as she almost loses control.

By the time Josie turned to face the crowded parlor, her full transformation — one she’d spent years perfecting — had occurred. Her impishness was gone. Her posture was Victorian straight. Bosom thrust forward, shoulders pinned back, her expression hard, but sultry. She was no longer the down-on-her-luck girl that Ferdinand had met way back when. She was now the legendary Madam Josie Arlington, a legend of her own making.

The room swarmed around her, every man eager to be in close proximity. Josie launched into her little routine: batting her eyes, walking her fingers up her rogues’ gem-stone shirt studs, pinching a cheek. By design she spoke sparingly. Words could take away from whatever daydream a man had come in with, and that was the last thing a madam wanted to do. 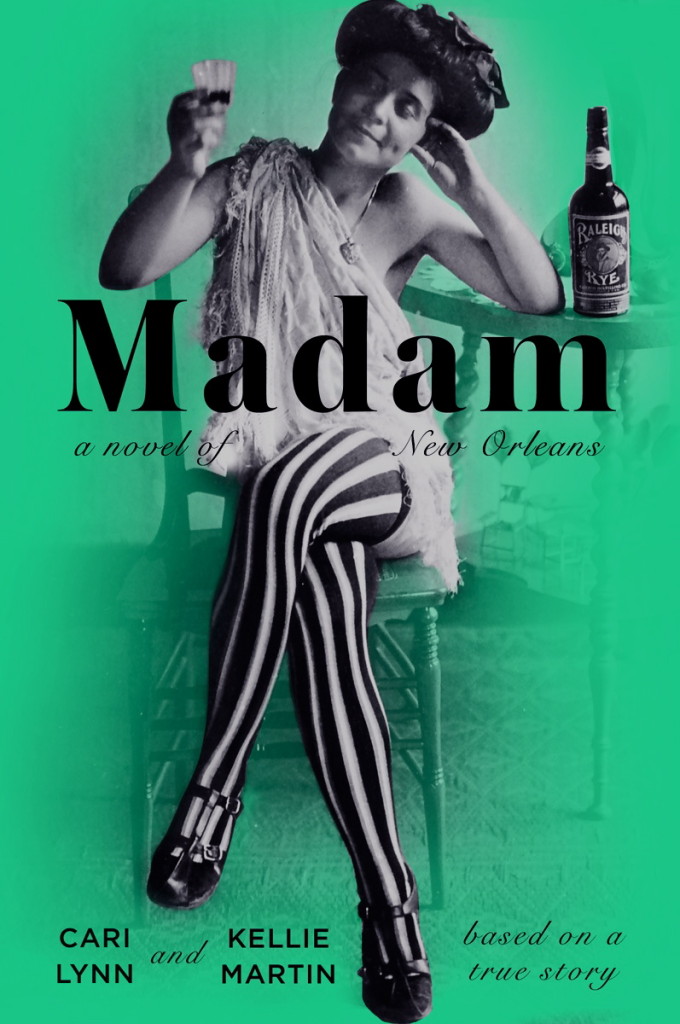 She did her best to remember faces, names, and trivia.  As in, “Well, hello again to my handsome Mister from Mississippi, whose favorite color is redheads.”

She also knew to do this parade early, before the alcohol took the men’s tongues and loosened their inhibitions – and even still, there were those that couldn’t resist pinching her bustled behind or daringly grabbing at her.  Josie had trained her girls to keep a sharp eye on this kind of behavior. The girls knew precisely when to swoop in and cause a distraction that would allow Josie to steal away.

But now, as she scanned the parlor, she saw no one. No lace, no bustles, no feathered hair, or hats or hair bows. The men seemed to be closing in. Their bodies grazed hers. She could feel their hot breath.

Just then the lamp sputtered and all at once fizzled out. A jolt of panic shot through Josie, and she felt her knees might buckle.

And then she saw glowing lights dancing on the ceiling.

In paraded her girls, tossing confetti.  The crowd parted to four girls, precariously balancing an enormous layer cake covered in sugar roses. They tried to step in unison, as everyone began to crow “For she’s a jolly good fellow!”

The girls exchanged fretful looks as the boisterous room was struck uncomfortably silent.

She took a deep breath, allowing her fists to unclench.

With a nervous little laugh she said, “There’s been such a mistake!” She forced a cool smile. “It’s certainly not my birthday. Might it be anyone’s birthday tonight?”

A man pointed to his friend. “It’s his tomorrow.”

“Perfect. Than this is your celebration.  And at midnight, I’m sure a lucky lady can make it quite official.”

Ferdinand quickly started up “For He’s a Jolly Good Fellow” again. In a shuffle of kid-leather boots, the girls awkwardly rotated the cake to face the patron, who was turning a deep red. The room confusedly resumed singing.

Josie made her escape.