Thank you very much. This is a story inspired by this season of lists and best-ofs and awards, and it’s called “The Best Thing in the World Awards.”

Many of the nominees 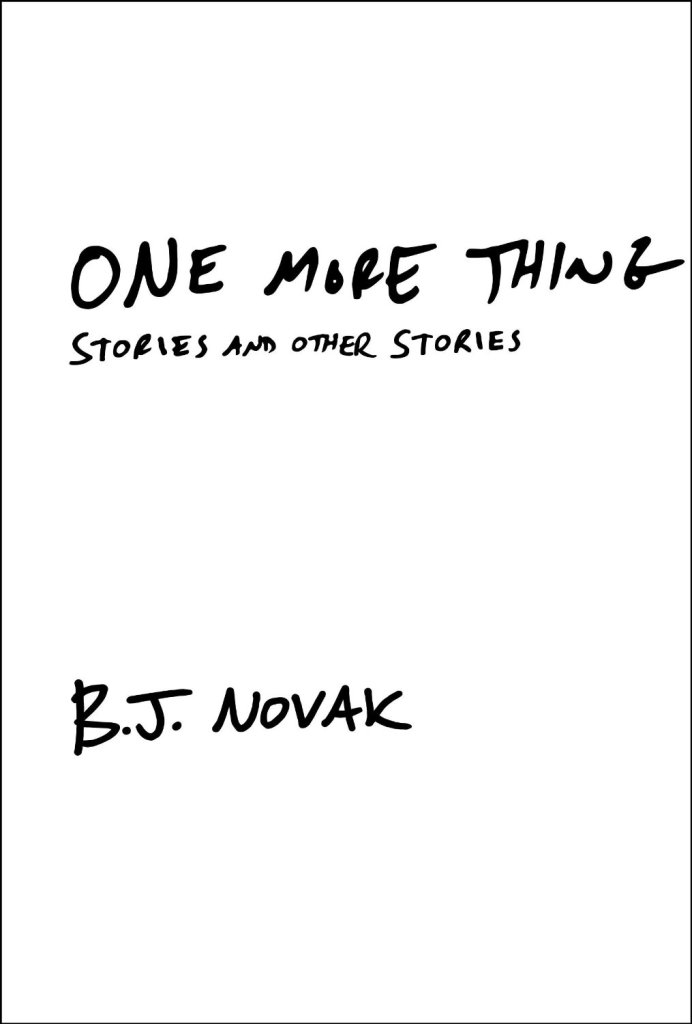 were returning. Love, Jesus Christ, Julia Louis Dreyfus on Seinfeld. Losing gracefully, which never won but was always nominated. Sunrises. Peace, which was often a finalist during times of war, but was otherwise not nominated. Summer evenings, the score to West Side Story, laughter, Christmas, and peanut butter and jelly sandwiches. Others were new: Internet on planes, spicy tuna on crispy rice.

Love always won. Everyone knew that and watched anyway, perhaps more eagerly, the way that people are more willing to get caught up in a certain type of movie when they have a sense that, deep down, of course love is going to win in the end. The fun isn’t whether love is going to win. The fun is in seeing how.

Welcome to The Best Thing in the World Awards, announced the host, Neil Patrick Harris. He had been the host for the past four years and he was terrific at it.

“When are you going to be nominated?” he was asked each year as he walked the red carpet on the way in, and he’d laugh it off. And so would the viewers at home. He was a fundamentally great host, there was no doubt about that. But it said a lot about how seriously took the awards that he wouldn’t be nominated, at least not for a long, long time. An awards show host? “No, sorry. We love him,” was the unspoken collective answer to this question, “but we’re talking about the best thing in the world here 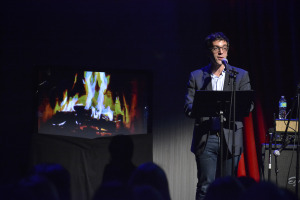 “Your votes, you, the viewers at home, are taken into account along with our confidential panel of experts and judges, all to determine the best of the best of the best.” Most people skipped or only half-watched the first 90 minutes of the show. There were dance troops, some subtitled singing. A man named Louis performed some stand-up comedy, but there wasn’t too much he could say on network television. Pixar debuted a ninety-second short film that was, everyone agreed, maybe just average for them but great for anyone else.

It was the final half hour that everyone watched intently, when the three finalists were announced, and then narrowed down to two, and then, finally, a single winner. The best thing in the world. Neil Patrick Harris returned to the stage, wearing a crisp blue suit that sharp viewers recognized as the best of it’s kind. The three finalists for the best thing in the world are, laughter. Applause. Love. Applause. And nothing.

[This version of the story is edited for time. Full audio is available.]

B.J. Novak: It is a little dark for a frolic but I thought I could take us there.

Brendan Francis Newnam: Yeah, but it was about love, which, this season’s a little bit about love.

Brendan Francis Newnam: Tell us about where that story came from.

Rico Gagliano: Yeah, but the nothing part.

Brendan Francis Newnam: But why Neil Patrick Harris? Why not a radio host or something like that?

Brendan Francis Newnam: So, a lot of kids are going to be reading another of your books this holiday season.

Brendan Francis Newnam: Us, too. Well, a lot of people have, actually. It’s called “The Book with No Pictures.” It’s been number one, I believe, on the New York Times Best Seller list for ten weeks. Is that right?

Rico Gagliano: That’s right. I didn’t know kids had that much money but that’s amazing.

Brendan Francis Newnam: For those who don’t know, what’s the concept?

B.J. Novak: The concept is that whenever a parent is given a book that they’re asked [to read], the kid is sort of waving to them, the kid actually has all this tremendous power because the rules of book-reading are such that the authority figure, who usually makes all the decisions, is actually sort of an actor for hire, with a script that this kid is in charge of. So, the idea of the book is that whoever is reading the book has to say all these words, even if the words say very silly things.

Brendan Francis Newnam: You kind of did a mini tour of elementary schools?

Brendan Francis Newnam: How many schools did you visit?

Brendan Francis Newnam: And you’ve done stand-up. What was it like?

B.J. Novak: This was like the best stand-up I ever did because this was, you know, they bring in the whole school of these K-3 elementary schools. You know, hundreds of kids and they don’t know what they’re going to see, and they kind of know what a book is, they kind of know what an author is, but they’ve certainly never seen a live comedy performance. And they’re sort of like… I’ve done colleges where a lot of the college students even haven’t seen live stand-up before so even that is something novel, that someone’s saying these crazy things onstage and no one’s stopping him, and that was exactly what was happening with these kindergarteners. I would say, “Booboo butt!” or whatever, and act shocked, and they would be elbowing each other, pointing like, “Do you see what this guy’s saying?”

Rico Gagliano: Between the two…you started as a stand-up comic. You performed for a lot of drunk and rowdy audiences. How rowdy compared to them were the grade-schoolers? Who’s the rowdier?

B.J. Novak:They were very rowdy, except you can do something with them which I wish you could do with stand-up audiences, which is every school has some sign language way to quiet the kids down. So, you can just put a finger in the air, you can put a finger to your mouth, you can snap twice and they’ll all snap back. That has never once worked for me in a comedy club.

Rico Gagliano: They should do that. The Comedy Store should enact some sort of signal.

Brendan Francis Newnam: And were they sitting at little cocktail tables with chocolate milk?

B.J. Novak: There was a two drink minimum, yeah.

Brendan Francis Newnam: All right, we have two standard questions. The first question is, what question are you tired of being asked in interviews? 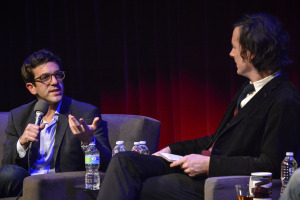 Rico Gagliano: Although it is interesting. When you came and read some of those stories for our radio show, which you did when it first came out, I was talking to you about this and you indicated this is something that you had wanted to do for a long time and had never done.

B.J. Novak: Specifically, if I were to say what I really see myself as, I think it’s really about having an idea and so desperately wanting to see the reaction to it. One of my friends suggested a title for “One More Thing” as “I Wish I Could Watch You Read This,” because I want to write things and then I want to bring it to people and see if they like it. So, this type of reading a story aloud is my sort of ultimate purpose, I think.

Brendan Francis Newnam: You want to be able to shush them if they don’t like it.

Rico Gagliano: So, our second question is, tell us something we don’t know.

B.J. Novak: Oh, the most interesting fact I’ve ever heard – and I have not heard it confirmed since this one class in college – is that during the Cultural Revolution in China, very zealous communist students decided, in certain towns, that red stoplights should mean go because red was the communist color. There were so many traffic accidents as the word sort of got out haphazardly that eventually they had to abandon this. But I thought that was the most interesting. It’s still the most interesting fact I know that no other person has ever told me, “I already knew that.”

B.J. Novak: Yeah, it’s a great story, too, even if it’s not true. It just goes to show you, fill in the blank.