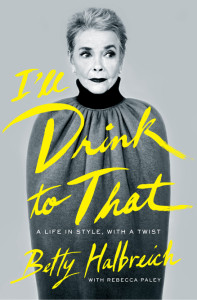 Brendan Francis Newnam: Welcome to the unglamorous medium of radio.

Betty Halbreich: You don’t have to. No one could see you, for god’s sake!

Rico Gagliano: So, you don’t like the term we just used, “personal shopper.” You’re not such a fan of it. Why not?

Betty Halbreich: I’m not a fan of being a “legendary” either.

Betty Halbreich: I refer to myself really as “clerk,” because, no matter what I do – and I do it every day, five days a week, all year – I still am clerking. All these fancy titles don’t seem to suit me very well.

Brendan Francis Newnam: In the book, you also explain that you view your job as kind of a creative endeavor.

Betty Halbreich: I hope so!

Brendan Francis Newnam: And “personal shopper” doesn’t capture that. So, tell me about that.

Betty Halbreich: The creative part is when somebody takes their clothes off and you have to start all over again, isn’t it? It’s like building a monument, a piece of sculpture, very often. An obese one sometimes, a rather thin one sometimes. All shapes and sizes. I’ve created that. And that’s the only thing that’s sort of kept my sanity. Otherwise it really would be extremely boring to play with women all day long, and hear their stories, and a bit of whining that’s attached to it.

Rico Gagliano: It’s interesting that you say it helped you maintain your sanity. Before you started your career helping people dress, you lived a lot like your clientele. You grew up in a well-to-do family, your husband was very successful, but then, because of his infidelities, your life kind of unraveled for a while. You suffered very deep depression, and you talked about how this job helped buoy your spirits. How so?

Betty Halbreich: From the day I walked into that store, it was like walking into heaven. I was scared to death. I had never worked in my life, but there was something insular about it. It sort of wrapped me up in a cocoon, and I utilized that. I began in a very menial sort of way, but after dealing with other women, I began to feel a little more grown up.

Rico Gagliano: Because you saw that other people had, you know, problems as well, maybe?

Brendan Francis Newnam: You talk about the therapeutic value of work itself, of having a place to go.

Betty Halbreich: Absolutely, absolutely! That office is my safe harbor. I have to admit to you, I didn’t feel so well today, and I thought, “If we could do this in the office, I would feel much safer.” I think this is a throwback to all the insecurities, because, if someone else were in this room that knew me, they would never believe what I’m telling you, because everyone thinks I’m the most secure, strong, 86 year old lady with her own teeth that they ever knew.

Brendan Francis Newnam: And I feel bad because your office, I understand, has a view of Central Park, and you just have a view of me, so, sorry about that.

Betty Halbreich: See? Look at how’s he gonna come back with this one?

Brendan Francis Newnam: How often do you lie to your clients? 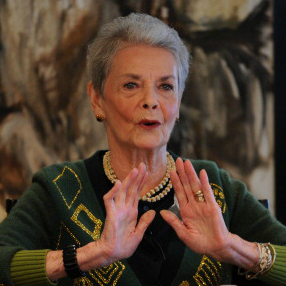 Betty Halbreich: No, that I don’t do. I’m brutally honest.

Rico Gagliano: Well, that is your reputation, and that’s why we brought you here. We hope you can give some honest advice to our listeners who sent in their etiquette questions. We told them that you would be here to answer them. Are you ready for these?

Brendan Francis Newnam: This first one comes from Leann in Warsaw, Indiana. Leann writes: “I do not like to shop. I prefer to get in, get the merchandise, pay and go. However, clerks are now trained to be chatty with customers. Is there a polite way to hurry up a transaction without seeming rude or churlish?”

Betty Halbreich: Why can’t you be rude or churlish? And I know where Warsaw is because I’m from Chicago.

Betty Halbreich: She lives in my territory. I think just a smile and saying, “Thank you, I have to go now,” will suffice for anything. I think you have to have some sort of a very strong attitude.

Now, I’m not anti-salesperson, but I do see some and how they work, and what she has to understand is they’re generally on a commission, so they really have dollar signs in their eyes, and she’s gotta learn how to handle this, and just be kind, not abrupt, but quick. Quick and out.

Betty Halbreich: It’s just, you’re not gonna have dinner with them or sleep with them.

Rico Gagliano: It’s interesting coming from you, though, because, probably at this point, part of what people are paying for is your time, because you are somebody that they wanna hang out with and talk to.

Brendan Francis Newnam: Too much so.

Rico Gagliano: So, you have the opposite problem. You want the customers to shut up.

Betty Halbreich: If I told you how many people I can take in a day, you’d absolutely faint. I’m supposed to have someone on the hour in every hour. They can spend the day. It goes from breakfast, they have a little lunch, and then I say, “I really have to go home now,” and I haven’t consummated a sale.

Brendan Francis Newnam: I remember, I read a profile, I think the New Yorker profile of you, and one of your clients wanted to go to the shoe department, and you said, “No, not the candy store today.”

Betty Halbreich: That’s correct, that is correct. They keep winding their way around, and I can never get out of the shoe department.

Brendan Francis Newnam: All right, well, Leann, there you go. Be rude and churlish, and they’ll understand.

No Matter How Expensive, Tights Are Still Not Pants

Rico Gagliano: It’s your life. Here’s something from David in Fort Collins, Colorado. David writes: “My wife frequently complains vigorously when women wear leggings or tights as pants. I, for one, rather enjoy seeing women wearing a nice pair of black tights, but of course, I maintain my discretion.” Good for you, David.

Rico Gagliano: Yes, except for national radio. “For the record, is it appropriate for women to wear revealing black tights in public when not at yoga class or jogging?”

Betty Halbreich: This is one of my big anger points. I can’t tell you how I’m obsessed with burning them! I can’t stand them! I abhor them!

Rico Gagliano: Why is that?

Betty Halbreich: Well, if you all have eyes, you see who’s wearing them generally. I mean…

Brendan Francis Newnam: All right, beyond whether or not your body may be… beyond that part, it’s just, it seems like this is exercise clothing. This isn’t for public. It’s rude to go out in the world… 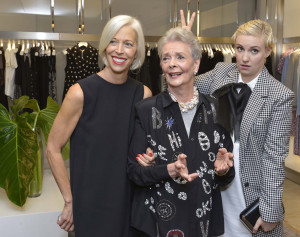 Betty Halbreich: Oh, no, no, no, no. The designers are doing these clothes now. They took them from the workout place. These are supposedly “acceptable clothes” today.

Betty Halbreich: They can be $1000 for a pair of those in leather, they still make you broad as a Cadillac.

Embracing Hats, Inside and Out

Brendan Francis Newnam: All right, so there’s your answer, David. This next question comes from Anne in Minneapolis, and Anne writes: “I would love to wear hats, but I don’t know when and where it’s appropriate to do so. Do ladies remove their hats when indoors, such as at work or in a restaurant? I remember wearing a hat to church when I was a child, and we didn’t remove them then.”

Betty Halbreich: You can wear a hat whenever you like! I mean, the fedora’s become the big women’s hat of choice lately, and I don’t see anyone removing them in the store or whatever. I see them at dinner, if you’re comfortable that way. In Minneapolis in the winter, and I know Minneapolis very well, my daughter lived there, I would suggest you wear a hat. It’s cold. It’s brutal. And she can wear one across her face as well, because it’s brutal.

Rico Gagliano: And your hands.

Brendan Francis Newnam: Betty Halbreich, thanks so much for coming by and telling our audience how to behave, and telling us about your book.

Betty Halbreich: Thank you, it was truly a blessing.