Audra McDonald: Well, it’s interesting. I don’t know that I want to say that I have to become an “old” Billie Holiday, because Billie Holiday is my age.

Brendan Francis Newnam: That’s right. She was in her early-mid forties. 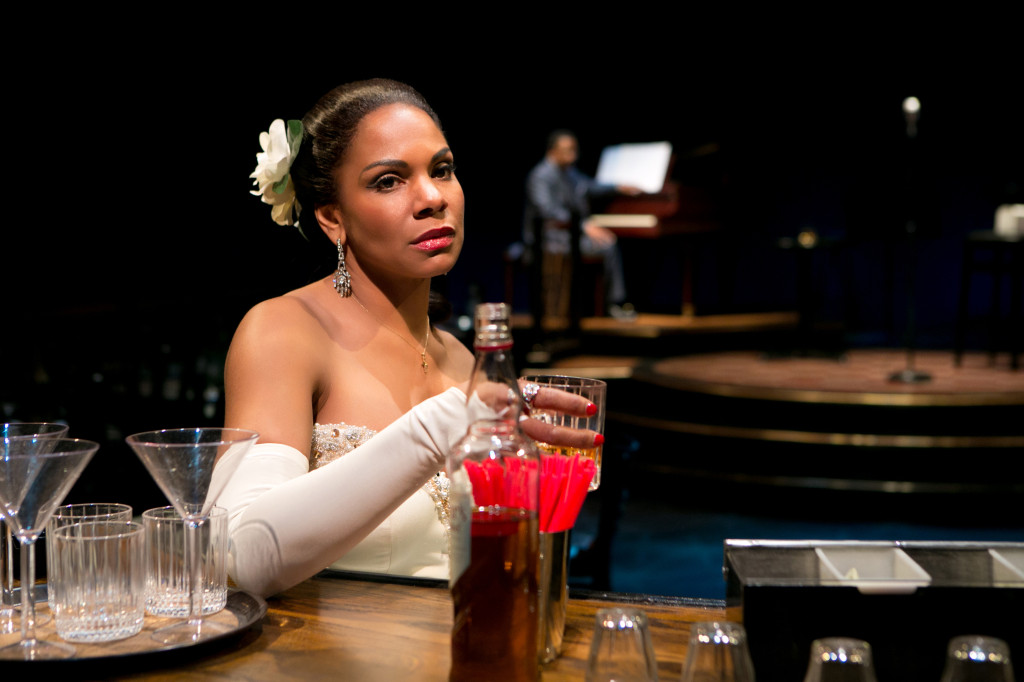 Audra McDonald: Yes. She was 43 at the time of this concert. She would turn 44 the next month and would die three months after that.

Brendan Francis Newnam: You forced me to say your age. I had to break a cardinal rule of dinner parties.

Audra McDonald: Please. Everybody knows my age. I wish I could go back, you know, but I can’t. Everybody already knows it. The Times printed it years ago, so…

In arriving at her sound at this particular point in her life, I had to listen to her on a nightly basis, and I still do. In trying to figure out how to approximate her speaking and her singing voice, I found it useful to go through, once I had heard a recording of her in her later days speaking, to go through the voice of my grandmother, which I used to sort of imitate a lot, and my grandmother and Billie Holiday had a very similar speaking voice. My grandmother was not an alcoholic or anything like that.

As far as the tipsy part of being Billie Holiday, most people who are drunk or who are on a lot of drugs, the last thing they want you to know is that they are drunk or that they are on drugs so, actually, I think one of the keys to playing a tipsy person is trying to convince everybody around you that you’ve got it together. I think that’s actually one of the biggest keys, she’s trying to convince the audience she has it together, until she doesn’t.

Brendan Francis Newnam: It’s a magnificent feat. The other element to this is, you are a performer in 2014, and you still want to deliver a great performance. You’re able to get across the pathos of Billie Holiday at this moment in her life, yet you still – I wonder if you’re completing the songs in a way that maybe she wasn’t able to. And so, how do you balance mimicking exactly where she was, and interpreting it for this production?

Audra McDonald: Well, I really haven’t tried to [mimic her performance]. I’ve only tried to approximate her voice. I don’t think anybody could absolutely mimic her perfectly. Maybe there are some people who can.

I try to find the essence of her voice, but what’s most important is what she’s trying to do, and that she is trying to give her side of the story, and she is trying to get the audience to listen to her with their own ears, and not believe everything they’ve read and heard about her, but be in this moment so she can give what she feels is her best performance and the truth about her life. So, it’s almost as if she’s defending herself, she’s up there defending herself, a little bit on trial.

Brendan Francis Newnam: A quick question about your voice. One of the interesting parts of this play is when she talks about how her voice is kind of a synthesis of Louis Armstrong and Bessie Smith. I wonder if, for you – I know you trained at Juilliard and everything – but are there influences you can pinpoint that helped you arrive at your voice, when you’re not in this production?

Audra McDonald: Well, absolutely. I mean, I know that there are certain people that I was obsessed with growing up. Judy Garland and Barbara Streisand, Lillias White, Patti Lupone. There was a lot of Lena Horne that was played in my house, too. I was absolutely obsessed with all those people, and I think how I arrived at my own sound was realizing that I could not imitate them, and the more I tried, the worse I failed. And so I think what ended up occurring is I realized I can sing these songs, but I gotta sing them with my own voice.

Brendan Francis Newnam: Well, your voice has garnered you so many awards, and it’s universally acknowledged that it’s a pretty special voice. How do you maintain your voice? For example, I know that you limit the amount of interviews you give.

Audra McDonald: Well, I think you hit the nail on the head. For singers, one of the main things is not talking a lot.

Brendan Francis Newnam: Thank you for making this exception.

Audra McDonald: Absolutely. Absolutely and always. I had one three days ago.

Brendan Francis Newnam: All right. Well, I’m gonna jump right to our two standard questions so we don’t drain the bank any more. The first one is, what question are you tired of being asked in interviews?

Audra McDonald: I think the question I am tired of being asked in interviews… I feel guilty saying this…

Brendan Francis Newnam: Everyone does it for us.

Audra McDonald: Oh, no! Was that how you trick people?

Audra McDonald: Oh, you’re terrible! OK. The way I figured out I could sing is it’s just something that I was doing all the time in our church choir, and I used to embarrass my dad because I would sing so loud in the church choir that I would sort of be heard over everybody else. And then, one day after church, my dad and my mom started matching pitches with me at home, and looking at each other and talking in a funny way.

Brendan Francis Newnam: All right. I’m not gonna ask you to drain the bank any more to tell me that story. Our next question is, tell us something we don’t know, and this could be an interesting personal fact, or it could just be an interesting piece of trivia about the world.

Audra McDonald: I wish I had more trivia about the world, but maybe something that people don’t know about me is I’m scared to death of balloons.

Audra McDonald: They scare me to death.

Audra McDonald: I’m afraid of them popping in my face. I think some balloons must have popped in my face as a child, or something, but they scare me to death.

Brendan Francis Newnam: So, even though you have children, you will stay away from balloon games at parties and stuff?

Audra McDonald: You know, I’ve had to blow up balloons at my kids’ parties, and I am horrified as I’m doing it, terrified. I squint and, with every one, or if someone blows it up too big in front of me, I’m like, “That’s enough, that’s enough!” For my kids, especially.

Brendan Francis Newnam: If you inhaled a balloon, the helium, that would be a crazy voice. Audra McDonald on helium.