Hi, this is Andy Daly. I am the star of a show on Comedy Central called “Review,” which is a show about a guy named Forrest MacNeil. He’s a reviewer, but he doesn’t review food or books or movies…

Instead, he reviews life experiences that are suggested to him by his viewers, whether it’s “What’s it like to get addicted to drugs?” or “What’s it like to have road rage?” or something incredibly dumb, like “What it’s like to eat fifteen pancakes?”  Whatever it is, he will take it seriously and he will do it full-out.

Forrest MacNeil belongs to the great tradition of people trying to immerse themselves in an experience and report on it from within. So, here’s a list of characters, real people and fictional characters, who also throw themselves into unusual situations and make themselves human guinea pigs.

Hunter S. Thompson, “The Kentucky Derby is Decadent and Depraved” 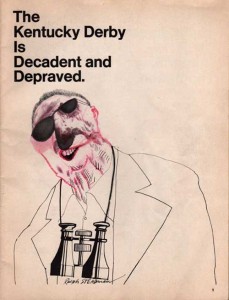 For a list like this, you have got to start with one of the great participatory journalists, Hunter S. Thompson. I am actually going to choose an article that he wrote in 1970 called “The Kentucky Derby Is Decadent and Depraved.”

Hunter and Ralph Steadman, his longtime illustrator -this was the first time that they worked together – went down to cover the Kentucky Derby. And, he knew what he was going to find there: outdated southern jerks, rich and drunk human monsters. His mission was to mix in with them and to find out what that lifestyle’s like from the inside.

What ends up happening is that he becomes a bigger monster than anybody that he’s there to observe, dragging poor Ralph Steadman along for the ride.

It’s hilarious, and it’s a statement about how somebody in the 1960s was looking at an old-fashioned convention. It’s a counter-culture figure stepping into something that feels timeless and intentionally old-fashioned and looking to upset the apple cart.

So then, second on the list, is sort of a parody of participatory journalism. This is a sketch from an episode of “Saturday Night Live” in 1984. Eddie Murphy was guest hosting, and in this sketch, he gets made-up as a white man and goes undercover as a white man.

Sort of the reverse of the book “Black Like Me,” where a white man went undercover as a black man in the South. It is an absolutely hilarious sketch. One of the things that he does is he rides a bus and it’s all white people, except for him, dressed as a white man.  And then there’s a black man, and as soon as the black man gets off the bus, a cocktail cart comes out and music starts playing. They start having an awesome party on the bus and he realizes, this is what’s happening when black people aren’t around.

And, I think we all knew, everyone knows watching it, that it’s not accurate, but as a way of exploring assumptions, I think it’s very effective.

I think that probably also came out around the same time as “Spinal Tap”, which also had a major impact on me as a mockumentary. Something that all the best mockumentaries do, that we definitely try to do in “Review,” is to adopt a tone of sincerity and seriousness when what you’re exploring is ridiculous and absurd, and those two things play off of each other incredibly well.

And finally, I want to talk about the time-honored trope in movies and books for a long time now, which is ‘the scientist who experiments on himself’, making himself a human guinea pig. Lots of examples of that in science fiction and in literature, and my favorite example though, has got to be the television series which ran from 1978-1982, “The Incredible Hulk”, starring Bill Bixby.

Unlike a lot of examples of that, where the scientist is propelled by arrogance, has been kicked out of the academy and is showing them that he can do it, Bill Bixby’s character is coming at it from the most sincere and pure point of view: he is a guy whose wife died tragically and he did not have the strength to save her, so he’s trying to make himself stronger. And, through a mix-up with the machines, that’s just not his fault, he ends up being turned into a sometimes-monster, constantly thwarted by evildoers, and also just the foibles of life.

There is one episode that I strongly remember, where he’s putting coin after coin into a pay phone and he keeps being told he hasn’t put money in it. His eyes go wide and, that’s it, he monsters out. He ‘Hulks’ out.

He’s a pure-hearted person. He’s a sincere, good person in the world who just made one terrible mistake, and I think in that way, he’s similar to Forrest MacNeil, who really just made one, massive mistake, which was taking on this television show to begin with.