Gus Unger-Hamilton and Gwil Sainsbury are the guitarist and keyboardist of alt-rock band Alt-J.  After meeting Joe Newman and Thom Green at Leeds University, the four formed the band in 2007 – then took five years to get around to releasing a full-length debut.  The wait paid off: “An Awesome Wave” made top-20 charts around the world, earning the band a Mercury Prize, festival headlining gigs, and transatlantic rock-star status.

Sainsbury and Unger-Hamilton tell Rico about their quiet beginnings, their noisy present, and their 28-year-old grandmother.

Rico Gagliano: So, the album, “An Awesome Wave,” was a Top 20 hit around the world. The video for “Breezeblocks” now has close to 17 million hits on YouTube… all this for not what you would call “Top 40” music. It’s full of tempo changes, the lyrics are cryptic, even the video is kind of unsettling, actually. Were you expecting this material to be embraced like this?

Gwil Sainsbury: I think we… you know, we always thought that what we were doing was kind of worthwhile. We really enjoyed the music we were making and listening to what we had just made.  It was satisfying.   And I think there was a hope that it would reach people in the way it has, but I don’t think I ever seriously thought it would.

Rico Gagliano: What was maybe a moment where you took a step back and realized, “Wow, this is really happening”?

Gus Unger-Hamilton: I think doing our first BBC Live session was really, really exciting. But then again, a lot of, you know, small bands do them and don’t have that much success after that. But I think certainly that was a time when we were like “Wow, this is a big deal.” We can say we’ve been to Maida Vale, the famous BBC Studios, and done that.

That was about August 2011. And that’s actually quite a long time ago, so I don’t know, it’s hard to pinpoint one real time.

Rico Gagliano: Well, speaking of your early days, one of the rumors flying around is that your sound evolved because you had to play very quietly in your dorm room at university. Is that correct?

Gwil Sainsbury: Yeah, this refers to Thom, our drummer, not being able to use cymbals. He basically had a kick, a snare, and a saucepan that he strapped to his leg with the cord of my dressing gown. He couldn’t have cymbals, he couldn’t have massive toms, because it was too…

Gus Unger-Hamilton: He had to use only brushes, as well. He didn’t use sticks.

Rico Gagliano: And you retained a certain flavor of that?

Gwil Sainsbury: I think we did that for two or three years while we were at university. That was our rehearsal environment, so that’s just how it’s turned out.

I think it’s a good thing, you know.  It’s really nice to have a minimal kick, cause it lets a lot of other parts breathe. As soon as you put a big crash cymbal on it, it’s a lot of room taken up.

Rico Gagliano: But I also have to say, having played in bands with a lot of drummers, drummers very often want to crush. They didn’t get into drums to not hit things. I can imagine this moment of release when finally you’re out of the dorm room and you get to bang on something.

Gus Unger-Hamilton: Tom does hit the drums extremely hard now, I would say, wouldn’t you?

Gwil Sainsbury: Yeah. We’ll do a sound check where our guitar tech and drum tech set all our levels — set up our instruments for us.  And when Tom actually starts playing, it’s so loud it makes me feel physically sick sometimes!

Rico Gagliano: The drum tech underestimates the ferocity with which Tom is going to attack the drums.

Rico Gagliano: All right, we have two questions that we ask everybody on the show. Our first question is, if we were to meet you at a dinner party, what question should we not ask you? The question you’re tired of being asked.

Rico Gagliano: That is not what I expected. For those who don’t know, “Alt-J” is the keyboard stroke that creates a triangle on a computer screen, correct?

Rico Gagliano: ‘Tessellate” being the name of one of your songs. I won’t ask you that question.

Gwil Sainsbury: Yeah, the main response being that we don’t really care about triangles that much.

Rico Gagliano: It was a phase.

Gwil Sainsbury: It was a phase.

Rico Gagliano: All right, and our second question is tell us something we don’t know. It’s less a question than an order. And it can be about anything you like. It can be about yourself, a piece of trivia, something that will blow people’s minds at a party.

Gwil Sainsbury: Blow their minds at a party? I don’t know if this will do that. It is just something quite funny that no one knows about the band, and that’s that we call our tour manager “Nan.”

Gwil Sainsbury: As in nanny! As in nana, as in grandma.

Rico Gagliano: Is this person a woman?

Rico Gagliano: Are they elderly?

Rico Gagliano: Is this because you’re very young or is it because she acts like she’s quite old?

Gwil Sainsbury: I think it’s because we know we can get her to do stuff for us.

Gus Unger-Hamilton: I think it started because she used to do nice things for us. Like, one time we had some interviews to do, and we didn’t want to do them, so she made us all hot drinks, and that was really sweet.

Gwil Sainsbury: She also, at Christmas, she sent us all a Christmas present that was like a laundry bag with our name on it. We all got our own one for Christmas from her. It’s even got a delta on it. 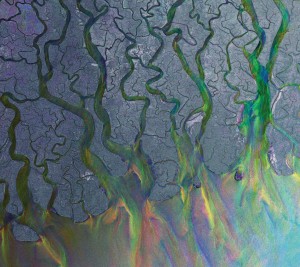 Rico Gagliano: Oh, it’s got the triangle on it.

Gwil Sainsbury: And our names.

Rico Gagliano: Can she work for me?

Gwil Sainsbury: No, she’s ours!

Rico Gagliano: There needs to be an agency that has band nannies. That could be the name of the agency.