Danny Palumbo: My brother and I are really opinionated about food, myself almost in a very obnoxious way. I see dining trends and I’m like, “What the hell is this about?”

So, we had a mutual friend on Facebook, who’s a chef, post a picture of something called “a deconstructed BLT”. It was a long, square plate that had pork belly, grilled heirloom tomato, and Romaine lettuce, and I was like, “This is the dumbest thing I’ve ever seen.”

So, my brother and I were just talking about all these different food trends and how pretentious they are, and I don’t know. I had this idea. I was like, “We should hone it into one single idea, and do a fake website for it.”

Small plates are a thing. Let’s just miniaturize food, and also make fun of how people are abbreviating everything. People go, “Can I get a Pinot Grig or some tacs, instead of tacos and Pinot Grigio, and it’s so infuriating. So, we just decided to go that route.

Brendan Francis Newnam: I want to take a moment to read the Abbrev’s mission statement from your website: “Abbrevs is another one of our heavily financed concept restaurants. At Abbrev’s, we serve abbreviated versions of food. Each dish is less than a bite, not even a morsel. A minimal nourishment restaurant with a focus on leaving you still hungry. The hope is to create an entirely new dining experience where the eater is only somewhat satisfied but thoroughly intrigued.”

Now, satire, part of the reason it works is because there is truth embedded in it. Have you had this experience at a fine dining restaurant?

Brendan Francis Newnam: This website is parodying a couple of things. You’re parodying food culture, and more directly, restaurant websites. First, let’s talk about the food culture. You’re sending up small plates, and you have pictures of bite-sized food items like the micro micro green salad, ‘N.E. Chow’, which is an abbreviation for New England clam chowder, and there’s a picture of a tiny piece of onion and one clam. Do you have a favorite food item on this menu?

Danny Palumbo: As far as the one that looks the best, I think N. E. Chow was something my brother did. I always look at that one, and I’m like, “Man, that just looks beautiful.” It looks really good to me.

Brendan Francis Newnam: Well, it’s not really chowder, though. It’s supposed to be, I think, the soup, but I don’t think there’s any liquid in the photo.

Danny Palumbo: There is a tiny dollop of cream on top of that slice of onion, that I guarantee is there, that my brother made sure to put on there.

Brendan Francis Newnam: So, when I go to restaurants like this, you know, small plates-oriented restaurants, I’ll sometimes get a slice of pizza afterwards just to satisfy my hunger.

Danny Palumbo: I was just thinking. We got oysters today, and I had a piece of fish, and I was like, “That was good,” but I saw a hot dog stand on the way here, and I was like, “I could just pound two hot dogs right now and be good to go.”

Brendan Francis Newnam: And, that’s only two dollars on top of your hundred-dollar tab. It’s a full meal. The other part of restaurant culture you’re sending up with this website, there are links on the top. ‘Sup’ is the about page. That’s s-u-p, short for what’s up. ‘Crumbs’ is the food page, and then one of them is ‘tatts’. This is just a chef, you, I guess. Is that you?

Brendan Francis Newnam: With all these crazy tattoos that say, like, “I AM A CHEF” on your fingers. So, what’s your theory? Why do you think chefs get so many tattoos?

Danny Palumbo: I don’t know. Anthony Bourdain always called chefs ‘misfits’, and also, let’s just call it what it is. Most chefs and cooks are just degenerates that drink a lot and do drugs. That’s completely true. 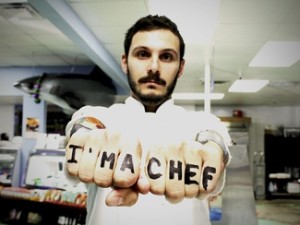 Brendan Francis Newnam: I am not laughing in agreement. The other thing you’re sending up in this are food websites. You know, food websites… we had a guy on here a few years ago who did a parody of a food website, and his parody was based on how baroque they were. How hard it was to find an address. You would go to a website and it would play music and there would be all these photos and these elaborate menus, but you couldn’t find the location. And then, the stripped down website has become more of the norm, which you’ve sent up here with Abbrev’s. What is a restaurant supposed to do that doesn’t make it ripe for parody?

Danny Palumbo: OK. This has become kind of an issue now too, back home in Austin. Those websites are direct rips from popular restaurants in Austin, that this guy owns. I love his spots, by the way, Parkside and Olive & June, but I think —

Danny Palumbo: Yeah, I think he’s a little bit upset, but whatever. I kind of like the way that looks. I like it being really stripped down. Don’t have a PDF menu that you can download, you know what I mean? Nobody wants to download shit, right?

Danny Palumbo: Although, the chef, I think his name is Shawn Cirkiel, does Olive & June, his bio is like seven pages long. Who is reading this before they go to the restaurant? “I really want to get to know this guy!”

Brendan Francis Newnam: I like how, on Abbrev’s, the address is 5001 Airport Blvd, Austin, Texas. It gives the hours, and it says “No Parking”.

Danny Palumbo: Yeah. Forget it. You’re going to have to walk here. And then, we throw you out on the street.