Zoe Kazan stole a good many hearts (and Paul Dano’s) as the muse-come-to-life in indie film favorite “Ruby Sparks” — a story she also wrote.  She’s also made memorable turns on TV shows like HBO’s much-missed “Bored to Death.”  But in addition to her regular film and TV gigs, Zoe’s no stranger to the stage, acting in several plays and penning a few of her own.

Her latest effort is “Trudy & Max In Love,” which wraps up its world premiere run this Sunday at the South Coast Repertory theater in Southern California.  Zoe sat down to talk with Rico about why theater is like an illicit love affair, about the challenges of monogamy, and about a super-cute orphan chihuahua named Wiley …who by the way (breaking news!) has now been adopted.

Rico Gagliano: So, the plot of the “Trudy & Max in Love” is actually pretty straightforward, but do you mind giving a little summary?

Zoe Kazan: Yeah — it’s about a married woman in her late 20’s who meets an unmarried man in his late 30’s, and they sort of move into a very dangerous situation where they kind of fall in love.

And you read the play, right Rico?

Rico Gagliano: No, this is the first I’ve heard of it! That’s really the plot? That’s crazy!

Rico Gagliano: No I did read it, of course. What inspired you to take on this particular topic?

Zoe Kazan: I had been wanting to write about an affair, mostly because I had been sort of thinking… “Why write a play?” basically. A play is so hard to get put on, and it can be so painful to have a play go up, and I find the experience of sitting there every night and watching the live event happen really taxing. It’s definitely taken years off my life, because you’re sitting there like, “Oh my God, what if they forget their lines.” It’s incredibly nerve-wracking. And why not write a TV show or a movie where you get paid money?

Rico Gagliano: and you can make sure that what goes on the screen… nobody’s going to flub a line.

Zoe Kazan: Exactly. So I had been thinking, you know, “What can you do on stage that you can’t do anywhere else?” And I started thinking about an affair, and how an affair is sort of like a theater.  That there are separate rules inside of a theater than in real life. Everyone behaves in a different way when they go in there.  And it’s also like a little secret space where you can behave in this completely different way than you do in your real life, both as an audience member and as an actor… and then when you leave you sort of can only take your memories and the thing dies.

Rico Gagliano: You’ve never been married to my knowledge? 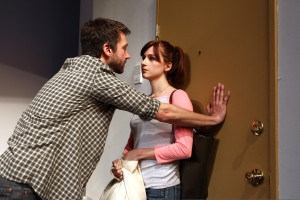 Rico Gagliano: As one who has been, I can say you nailed, kind of uncannily, some of the difficulties of being married. Where did you gain that insight?

Zoe Kazan: [laughs] Well, I have been with a partner for six years…

Rico Gagliano: It’s true, but that’s not the same thing.

Zoe Kazan: Well, I don’t know. I think a lot about marriage. You know, everyone’s always asking me when we’re gonna get married, so it’s definitely on my mind.

And the idea in general of monogamy — what it means to sort of just choose one person and keep choosing that person — it seems kind of crazy to me.  And yet here I am in a monogamous six-year relationship. So I struggle with the idea of it, and I sort of wanted to write about that.

Rico Gagliano: And you can sense that struggle actually in the characters in this play. Even as they’re falling madly in love, they’re constantly challenging each other about what they believe about love, and how they should be behaving, or why it doesn’t matter.

Rico Gagliano: You’re above that.

But as a result, I’m much more interested in the kind of muscularity of a love story. Like, you know, people that don’t get bowled over by red roses. That’s kind of why I think these people get into trouble in some ways — is that they both feel that they’re in control, or in some ways above sentimentality. And then they get very much caught up in sentiment.

Rico Gagliano: Now I have to ask: This play, and also your movie “Ruby Sparks,” both are about the difficulties of relationships. “Ruby Sparks” actually starred your boyfriend Paul Dano opposite you. I wonder if these pieces inspire conversation between the two of you about your relationship, or do you just kind of try to pretend that you haven’t bared your psyche on the page?

Zoe Kazan: [laughs] Oh, yeah! Probably the latter. Probably like, “Let’s not deal with it.” I think it’s really hard to talk about.

You know, the impossibility of knowing another person is something that artists have grappled with for a very long time. But I think, even being together as long as Paul and I have, sometimes I feel like there’s no way for him to understand what it’s like to be inside of my skin.

Rico Gagliano: But you’re writing plays and movies that kind of are the inside of you brought outside. Like, in a way, he gets a clearer vision than most people do of what’s going on in his partner’s brain.

Zoe Kazan: I mean, all I can say is that, you know, he still digs me, so I guess he’s okay with the way that I think!

Zoe Kazan: It is, it is intense.

Rico Gagliano: I think it would be an unavoidable topic of conversation after you know, going to opening night, that you’d be like, “Maybe should we talk about relationships right now?”

Zoe Kazan: Well, someday you and I will have a beer and we can talk all about that!

Rico Gagliano: All right, we’ll leave it off the radio.

We have two questions that we ask everyone on the show. Question number one is: if we were to meet you at a dinner party, what question would you least like to be asked? What are you kind of sick of answering?

Rico Gagliano: Yeah. “It had almost no impact on me, but I vaguely know something’s up here.”

Zoe Kazan: “I kind of vaguely know you.” Yeah! It feels so embarrassing to recite your resume to people.  I got embarrassed when you recited my resume at the beginning of this. I don’t know, it just feels like you’re constantly advertising yourself. I just get really self-conscious.  Sometimes I lie just so I don’t have to do that.

Zoe Kazan: No — I’ll say like, “Oh, I’m a geologist,” or something, just so that they don’t ask me any more questions.

Rico Gagliano: Smart. All right, Here’s our second question: tell us something that we don’t know.  And this can being either about yourself or just the world at large, a piece of trivia about something.

Zoe Kazan: Wow, you know… There’s a dog who is up for adoption at Perfect Pet Rescue, which is an organization here in LA. The dog’s name is Wiley, and it’s a Chihuahua and he needs a home. He’s four pounds and he’s super sweet. We can’t have a dog in our apartment or I would take him.

Rico Gagliano: Are you saying that there’s a specific dog that you want us to adopt? 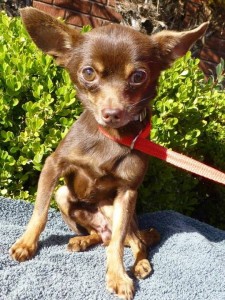 Zoe Kazan: Yeah, Wiley at Perfect Pet Rescue. It’s only a year old, he’s really sweet. I went and met this dog and he really needs a home.

Rico Gagliano: That is the nicest thing anyone has ever said on our show.

Zoe Kazan: Good! I feel like, I was like crying about this dog last night. I feel super-passionate about it. He’s just the sweetest dog, and I can’t take a dog.

Rico Gagliano: All right, we will happily put his picture on our website. It will be the first time our culture show has saved a life.