Brendan Francis Newnam: Each week, you send in your questions about how to behave, and here to answer them this week are Tim Heidecker and Eric Wareheim. They created the hilarious and deeply strange comedy series, “Tim and Eric Awesome Show! Great Job!” and now, at last, they’ve published a self-help book. It’s called “Tim and Eric’s Zone Theory: Seven Easy Steps to Achieve a Perfect Life.” Here’s a clip from the promotional video they made about it.

Rico Gagliano: I get it!

Brendan Francis Newnam: The book includes chapters on “How to Smell Yourself” and of course, “How To Destroy Bees.” Tim, welcome.

Eric Wareheim: Thank you so much. Praise Ba’hee Priss Dimmie.

Rico Gagliano: Well, there you go — one of the gods of your new system. First of all, I do think a lot of people would be curious to know why one would destroy bees.

Tim Heidecker: Well, they’re a nuisance and they are dangerous. They spread disease and they serve no function beyond being a pest.

Eric Wareheim: The reason we wrote this book is that there are a lot of facts out there about different religions and different ways to be a better person and these environmental issues, and one thing that is a total farce is the bee thing. People are so worried about the bees, and we’re here to say, “You got to get rid of those bees.”

Tim Heidecker: We did a little of our own scientific research, and found out… you know, we hear about honey, and bees, and pollen and these things?  It’s all a joke. It’s all manufactured.

Tim Heidecker: The unsung hero in the insect world is the fly, the common housefly. That’s the one. The flies provide the honey. That was sort of a mind-blowing piece of information we found out.

Rico Gagliano: There’s so much to learn.

Brendan Francis Newnam: Yeah. So, it’s pretty clear that the book, and your style of comedy, is totally absurd…

Rico Gagliano: What?! No!

Brendan Francis Newnam: Yes. Which, we confess, makes us jealous, because it seems like you’re not bound by any rules. But of course, it does take craft to make something absurd actually funny. What, do you find, makes the difference between absurdity and–

Tim Heidecker: Well, we don’t like to talk about comedy too much, because you start sounding pretty pretentious pretty quick, but I’ll be happy to…

Rico Gagliano: We did tell you this is a public radio show, right? This is our bread and butter.

Tim Heidecker: Yeah.  I think, as long as it’s got some point of view and it’s not pure whimsy. We always try to do stuff that has some kind of message buried in there, that comes from the way we look at the world.

Rico Gagliano: In this case, the message would be taking to task these self-help books/New Age religion books. Was there one that stood out to you as particularly ripe for satire?

Tim Heidecker: Well, not so much one. I mean, we went to the Goodwill, which is where you’ll find most of them [laughs]…

Rico Gagliano: That’s where they all are!

Tim Heidecker: People tend to get rid of them pretty quickly. 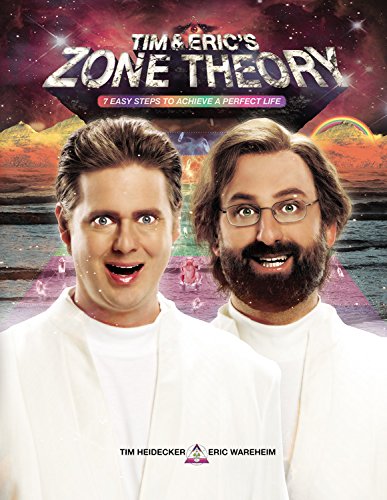 Tim Heidecker: Yeah. There are always numbers involved: There’s “12 reasons to do something,” or “the three easy ways to go about something.”

Eric Wareheim: A lot of them are recipe books.  The New-Age hippie-dippy ones, are just long, 500 pages of how to make a potion to make you more positive that day.

Eric Wareheim: Yes. I can’t remember the name of this one, but it was all mushrooms and herbs and stuff. We got inspired from that.

Brendan Francis Newnam: There’s a lot of ingestion in this book.

Tim Heidecker: Yeah, there is some book — that you showed me, Eric — about a way to cook with a certain bodily fluid that you wouldn’t want to cook with.

Tim Heidecker: It’s a fluid that men produce.  Women don’t. Let me put it that way [they all laugh].

Eric Wareheim: Fill in the dots there.

Tim Heidecker: I was also reading… at the time I was writing this, I was reading “Going Clear,” of course.

Tim Heidecker: And, that heavily skewed things for us.

Brendan Francis Newnam: There are also moments in this book, and in your TV shows, where the comedy turns into almost horror. The section of this book called “Removing Your Tubes” is truly grisly [laughs]. What turns something from funny into frightening, and why are you so interested in that line?

Tim Heidecker: For a lot of people, it never turns into funny! It will remain horrifying…

Eric Wareheim: But that kind of stuff is based off of real things that happened to us. For example, I had this weird fatigue illness last year, and I went to a lot of Eastern doctors, who would make you do the craziest things: cleanses, and these ozone therapies where you remove all this blood and put in all this oxygen. Really bizarre, experimental things. That’s just what the book is based off, just the next level of things…

Rico Gagliano: You’re telling us “Removing Your Tubes” is based on reality?!?

Tim Heidecker: Well, it’s a comedy thing where you say, “Let’s just all agree that we all are filled with tubes. Then, we can proceed along.”

Rico Gagliano: Of course, therefore, they can be removed.

So, our audience apparently didn’t do very well in helping themselves, so they have questions for you, God help them.

“What is the proper thing to do here? Eat it, and pretend it isn’t a football?”

Here is something from Phil in Atlanta, Georgia. Phil asks (this is a tough one):

“I was having dinner at a friend’s, recently. It turns out that the turkey being served was nothing but an inflated football disguised to look like a turkey. What is the proper thing to do here? Eat it, and pretend it isn’t a football?”

Tim Heidecker: Now, this is a case… you were asking about comedy when it just is absurd for no reason? Phil in Atlanta has a lot of work to do in that department.

Brendan Francis Newnam: Yeah, where is he coming from?

Eric Wareheim: A lot of people come up to us and just want to riff with us.  They’ll say something wacky and weird, and we just look at them with a straight face and usually just walk away.

Rico Gagliano: So, Phil — the real etiquette problem is, why are you doing this to Tim and Eric?

Tim Heidecker: Right, and it’s a shame, because we are guys of great life experience. We’re successful in what we do. It’s a great opportunity to ask, you know, serious questions.

“Is it OK to present the gift in front of others, when I have no gifts for anyone else?”

Brendan Francis Newnam: We’ve got those. Here’s maybe a more common etiquette problem. This one comes from Sarah in Los Angeles, and Sarah writes:

“I’ve been trying to give a friend a gift for over two months. The first time I will have a chance to see him is at a dinner party. Is it OK to present the gift in front of others, when I have no gifts for anyone else?”

Eric Wareheim: That’s a good question. I actually do this move, and you don’t bring it to the table. You keep it in the car or you bring it in a satchel. You hang up the satchel at the door, and once people are starting to disperse, you bring it over. There’s nothing worse than being a show-off. Everyone else feels very sad.

Tim Heidecker: It feels like Sarah in L.A. knows the answer to this question.

Brendan Francis Newnam: You just sounded like your Zone Theory.

Tim Heidecker: Yes!  “Look inside yourself. You have all the answers.”

Brendan Francis Newnam: You have all the answers, Sarah.

Rico Gagliano: All right. Here is something from Mark, in Pittsburg, California.

Rico Gagliano: Yes, there is a Pittsburg in California. There’s no “h” at the end of it, according to this spelling I have in front of me. Mark asks:

“Is it polite to stop someone from playing an online multiplayer game — say, for dinner, chores or to pay attention to me? It is only a game, but also, it may have taken hours for the game players to get where they are.”

Tim Heidecker: Well, all games, I’m sure, can be paused.

Rico Gagliano: I don’t know. Can you in an online multiplayer game, though? Isn’t the game continuing without you?

Tim Heidecker: Oh, I’m so far removed from even knowing people who engage in that.

Eric Wareheim: I tuned out the first time you said “game.” I’m in a whole ‘nother place now.

Brendan Francis Newnam: So, then, it is polite to get them to stop playing.

Tim Heidecker: Yeah. I would go over and unplug the system.

Brendan Francis Newnam: And, who knows? Maybe Mark is from Pittsburgh, Pennsylvania, but just doesn’t know where he is right now, because he and his friends are all gamers.

Eric Wareheim: Mark, put down the game, pick up our book, and change your life, once and for all.

Rico Gagliano: Tim and Eric, thank you so much for telling our audience how to behave, I’m pretty sure.

Tim Heidecker: This was a hoot.

Eric Wareheim: Thanks for having us.