Journalist Stephen Dubner is co-author — along with economist Steven Levitt — of the monster bestseller “Freakonomics.” The book spawned a sequel, a documentary, a great podcast, and now a new book, “Think Like a Freak” — which aims to teach readers how to solve problems. But this week Stephen graciously offered to solve our listeners’ problems for them — including an easy tip for those who wish to shut out the world.

Brendan Francis Newnam: Your new book is called “Think Like a Freak: The The Authors of Freakonomics Offer to Retrain Your Brain” —

Stephen Dubner: When I hear you say that, that sounds so scary. We offer to ‘Retrain your brain.’ That doesn’t sound voluntary at all.

Rico Gagliano: You came up with the idea, man, it’s your title!

Stephen Dubner: I’m not sure if I came up with that part. I certainly agreed to it at some point, but doesn’t it sound somewhere between Frankenstein and Dr. Strangelove, though? 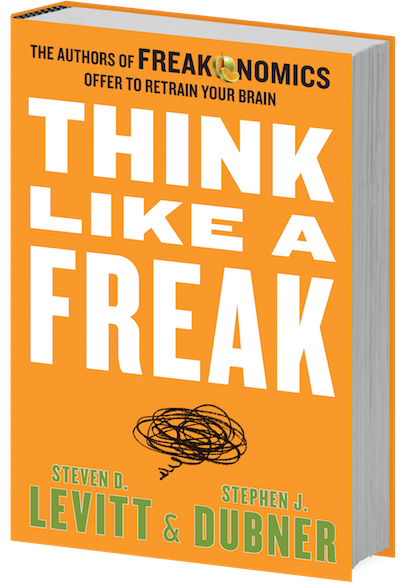 Brendan Francis Newnam: Yeah, it could be considered a little fascist. But we know that that wasn’t why you wrote this book. You wrote the book to help people live better lives, right?

Stephen Dubner: Ostensibly, yeah. We thought, wouldn’t it be great if we could, like, help people solve problems? What if we could deputize the whole world, or whoever wants to, to think like we do — if they want to — to kind of have this set of rules for thinking a little bit more productively, or rationally, or creatively, or whatever. So that’s the idea of this book.

Brendan Francis Newnam: And for you, a big part of problem-solving is a concept called “incentivizing.” Can you first quickly lay out for folks who haven’t read any of these books, how that works?

Stephen Dubner: Yeah, so basically, we do argue in every book, really — because this is really the foundation of what we do — that people respond to incentives. There is some set of incentives around a certain issue that is going to change their behavior. And when you say “incentives,” a lot of people think money — financial incentives.  But there are other incentives that really, really, really change behavior, for good or bad.

Stephen Dubner: Dessert is a big one. You know, the amuse-bouche has made men do things they never thought they would do.

We have some examples in the new book how… there will be a topic like: “How do you get people to consume less electricity.” If you ask them what will change their behavior, they’ll tell you a certain moral incentive — “I wanna protect the planet” — or a social incentive: “I wanna leave it in better condition for my grandkids.” That’s what they say. But this experiment showed that the only incentive that really worked was what we called the ‘herd mentality incentive.’ In other words, if you tell people that everybody else is using fans instead of air conditioning, that is going to get them to do it.  As opposed to, say, “Did you know how many fewer tons of carbon dioxide you can put into the atmosphere?” and so on.

Rico Gagliano: That feels true, but it’s also, in a way, a kind of unromantic view of humanity that you necessarily have to believe in there, you know?

Stephen Dubner: Yeah, so I think the natural response is to say, “Oh, man, that stinks. The human animal is so flawed. Why can’t we all do things that are good because they’re good? My good behavior helps everybody.”

But my view is not to judge that and to condemn it.  My view is: that’s useful information. If I really want to help the world, I should put away my moral compass, at least temporarily. When you’re trying to really figure out a problem, you should find a solution that is not one that everybody should do because it’s the right thing, you should find a solution that everybody will do because they want to do it.

Brendan Francis Newnam: Alright, well, we’re gonna ask you to take your moral compass out right now, though, if you can still find it…

Stephen Dubner: You mean actually use it?

Stephen Dubner: Dust it off.

Brendan Francis Newnam: Or order one on Amazon and have it delivered by drone, to you. Because we have a group of questions our listeners sent in, and you can use your moral compass, or you can use incentives.  Whatever, we won’t judge you.

Stephen Dubner: Never been more ready for anything in my life.

“My husband and I have a couple local restaurants that we frequent.  Enough so that all the regular staff recognize us. The other day I saw an online deal, something like a Groupon, for one of our regular restaurants. Is it bad form to buy and use an online deal at a restaurant you frequent?”

Stephen Dubner: That’s a great question, I love that.

So, here’s what I would do — and I’m not saying this is based on either a good moral compass or a good reckoning of incentives. I would bring my coupon in there.  I would let them bring me the bill with the discount, say 50%.  And then, you know what I would do? I would just tip double, or triple, or whatever, tip super hard, so that they actually get more of it. Because then you’re solving what’s called “the principal agent problem” — the people who are bummed, meaning the waiters, you’re making a point to them: “I’m gonna pay more to you, and this is a one-time thing and I don’t want it to hurt you.”

Rico Gagliano: Absolutely. And that’s kind of what you do if you get comped anything for free at a restaurant. You’re kinda supposed to tip as though you paid for it.

Stephen Dubner: In other words, that was an incredibly unoriginal answer. And you’re right.

Brendan Francis Newnam: Yeah, but you used that whole “principal agent” thing, and that was really impressive — that was dazzling.

Stephen Dubner: I dressed it up, yeah.

Rico Gagliano: Here is something from Johan in Norway…

Stephen Dubner: Oh, I’m going to Norway soon for the first time! I am so excited.

Rico Gagliano: Well, we’ll hook you up with Johan, the dude’s cool. He says:

“When commuting using public transportation, I think we all look forward to spending twenty minutes with a book, a podcast, a newspaper or whatnot. So, when you run into a neighbor or an acquaintance on a train and they make extended small talk, I feel like they’re breaching this unspoken contract. But sometimes, it seems like they feel forced into starting a conversation and we both actually feel awkward. How do I navigate this?”

Stephen Dubner: Do they not have headphones in Norway? Because that is what headphones are.  Headphones are the universal symbol of “I may love you, but I am in my world right now.”

You know, look — I’ll tell you something. I think non-verbal facial communication is really underused. Like, I really like communicating with people without saying anything. Like, an eyebrow raise, a smile. I love to smile at people.  I hate having to make the small talk. It’s like you run into the same people over and over and over again: “Hey, how you doin’?” “Pretty good, how are you doing?” Lie, lie, lie — it’s a series of lies, right?

Instead, you can throw me a raised brow like, “How’s it going,” and I can give you a like “OK,” or, if I’m going well, I can give you the big smile, and then you might give me the big smile back.  So, I think that you can do a lot more with your face than people think.

But once the headphone barrier is breached, then yeah, Johan is right, it can be hard to put ’em back on.

Rico Gagliano: Yeah, that’s the question. It’s kinda like, how do you keep your headphones on if somebody’s saying “Hey!”

Brendan Francis Newnam: I think you do the “headphone hover.” You just pull it out of your ear an inch and you look at them with raised eyes — you know, like, “Uh-huh, uh-huh” — but look as if you gotta put it right back in there.

Brendan Francis Newnam: They’re like, “Get the heck away from me.”

Stephen Dubner: … Exactly. They do really indicate: “I am the equivalent of your kryptonite, and you should not get in my zone.”

Rico Gagliano: I was gonna say, it is possible that Johan just has a low threshold for idle chit-chat.

Brendan Francis Newnam: Yeah, so maybe the small talk is just like: “Is this seat taken?” And he’s like: “Why are you talking so long?!”

Stephen Dubner: I think you just lost your Norway listenership, I hate to tell you.

Brendan Francis Newnam: I know. I think we just picked up the Don Rickles audience though, so that’s good.

Rico Gagliano: Stephen, alas, we are out of time.

Stephen Dubner: Thanks for having me.

Brendan Francis Newnam: That was fun. Thank you so much, Stephen.

Stephen Dubner: That was really fun. That was way more fun than the average… thing.