From making displays for Barneys New York store windows to being their Creative-Ambassador-at-Large – not to mention an author, television personality, global gadfly, and half of the reigning power couple in American retail – Simon Doonan has flown up the ranks of the fashion world and loved every kooky minute of it.

In his newest book, “The Asylum: A Collage of Couture Reminiscences and Hysteria,” he shares some favorite vignettes of fabulous eccentrics in the misfit-haven that is high-fashion. And, as a fabulous eccentric himself, we turned to him to answer our listeners’ etiquette questions with his signature style.

Brendan Francis Newnam: For 20 years, Simon designed legendary window displays for the luxury department store Barneys, where he is now Creative Ambassador. He’s a contributor to Slate.com, and he’s also written several books, including “Gay Men Don’t Get Fat,” “Wacky Chicks,” and his latest, “The Asylum: A Collage of Couture Reminiscences and Hysteria.” Simon, thanks for joining us.

Simon Doonan: How are you?

Brendan Francis Newnam: I’m- I’m disappointed you’re not in the studio with me, because I dressed up for you.

Simon Doonan: Oh my God, you didn’t dig out that old leopard jumpsuit again, did you?

Brendan Francis Newnam: I did. I put on my public radio boa. It says NPR on the end.

Brendan Francis Newnam: But other than that I’m well. So this book is a collection of essays about your life in fashion, and the thesis is that a lot of your peers are so crazy that they should be committed. So, who’s maybe your favorite or most memorable borderline personality?

Simon Doonan: I guess, I mean my thesis is really that fashion is simultaneously an asylum where nutty people go, but it’s also a refuge for super-freaks like me, who are basically unemployable, and probably couldn’t even get a job as a fluffer in a strip club.

Simon Doonan: -the great fashion editor, and she was really hilarious, and not at all what you would think of a Vogue or Harper’s Bazaar fashion editor. She was very unconventional and unpredictable, and sort of like a punk rock lady.

Rico Gagliano: Really? I did- there was that movie about her recently, and I didn’t get the punk rock aspect of her.

Simon Doonan: Well we’re talking about somebody who put rouge on her ear. Her ears were bright red. You know, whatever she felt like doing, she did it, and she was really proto in discovering, like the 60’s was a big thing for her.

She was the first person to photograph all the groovy Twiggys and the Jean Shrimptons, and the Mick Jaggers. She always came out with these insane expressions like, Brigitte Bardot’s lips made Mick Jagger’s lips possible.

Rico Gagliano: She paved the way.

Simon Doonan: She’s so right about that.

Rico Gagliano: Well it’s no accident then that you open the book with a quote from Diana Vreeland, which is, “Exaggeration is my only reality,” and you seem to follow that rule in your book you know, the models are super dumb. You yourself I think it’s safe to say kind of play up the dandy. But here’s what we’re curious about though, what stereotypes about fashion aren’t true?

Simon Doonan: I would say fashion people are extremely warm and funny and very much look out for each other. So that idea of people stomping all over each other-

Simon Doonan: -and clawing their way, you know, and digging their Lee Press-on Nails into each other, that’s not accurate.

Rico Gagliano: But where does “The Devil Wears Prada” come from then?

Simon Doonan: I don’t know. When I read “The Devil Wears Prada” I didn’t recognize anybody in it. You know, the coat flinging tyrant, the editor is nothing like Anna Wintour. Anna Wintour is actually very straightforward, and has achieved her success through being quite pragmatic and very well-liked by her employees.

Simon Doonan: Exactly. No one’s ever going to believe you.

Brendan Francis Newnam: All right, well Simon, you too are well-liked and occasionally pragmatic, and those are all the qualifications you need to answer our listeners’ etiquette questions. Are you ready?

Am I a Copycat Fashionista?

Rico Gagliano: All right, here is something from Liz in Bethlehem, PA, and Liz writes, very simply, “Is it all right to buy a shirt that you just saw your friend wearing?” Speaking of bitchy. Uh-oh.

Simon Doonan: Well, Liz, keep in mind Liz that I actually give really terrible advice. I’m not one of those, you know, you know that whole idea of Queer Eye for the Straight Guy running around, like getting people’s mullets removed and smartening them up, I’m not that person.

Simon Doonan: Like, I’m not one of those people that wants everyone to look like pretty and the same. I would rather people look demented.

So keeping that in mind Liz, I would say here’s what you do. Yes, you buy the same shirt, and everything that she buys you buy. And then it becomes, it becomes like a performance art thing-

Brendan Francis Newnam: I love it. 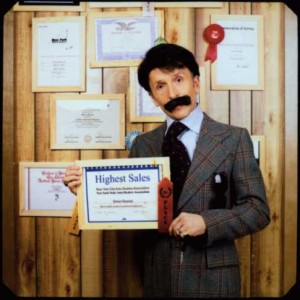 Simon Doonan: -where you’re like Gilbert and George, and you’re like “Gasp, there’s that girl who everything I buy she buys.”

Rico Gagliano: What if you just picked a stranger and started doing that? Not your friend.

Simon Doonan: I think it’s a genius thing to do, like, and then other people might see you and start doing it to you, and before you know it, there’d be a whole flash mob of people wearing the same shirt.

Rico Gagliano: That’s art for sure.

Repress or release your inner DJ?

Brendan Francis Newnam: All right. There you go Liz. This next question comes from M.A., and it was sent to us via Facebook and the question is, “When you’re in a party and the music is terrible, is it okay to tell the host to change it, or do you just pour your drink on the sound system and pretend you actually spilled it, then offer your iPhone music collection instead?”

Simon Doonan: Well, M.A., keep in mind that terrible is a subjective term, like one person’s punk rock is another person’s lounge music. You know what I mean? Not- we all have different taste.

But if you’re really having a rough time with the music the host’s playing, the key is to start dancing in a very strange way, sort of like you’re having a voodoo freak-out, and not in time to the music, but enough that it creates some kind of discomfort among the other guests.

Simon Doonan: And because you’re responding to it in such a creepy, deranged kind of way, they will change the music.

Rico Gagliano: They should, that’s the fashionable thing, not necessarily the most social thing to do, but certainly you’ll get your way.

Every girl is crazy ’bout a sharp dressed man

Rico Galiano: All right, this is from Robert in El Paso, Texas. Robert writes, “I’m attending a civilian wedding soon. Is it appropriate to wear my military dress uniform? I’ve heard it’s only okay to show up in uniform if the groom is wearing one, but there’s also conflicting advice that it’s what we always should wear to black tie events, as it is our equivalent of a tuxedo.”

Simon Doonan: 100% wear your military uniform, for many reasons, like you should be proud of it. A uniform is infinitely more interesting than a tuxedo, just from a purely objective point of view, and secondly, is there anything more boring than a wedding?

I mean, weddings are the ultimate snore, and you turning up in your military outfit, you know, people are gonna want to chat to you, you can tell your stories, your experience, so yes, yes, yes.

Simon Doonan: And pile on the medals.

Brendan Francis Newnam: Now I have a question, what if Liz is Robert’s friend? Should she wear a uniform too? 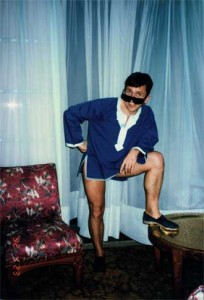 Rico Gagliano: Oh, there you go.

Rico Gagliano: All right, here is a final question. This comes from Jana in West Chicago, Illinois.

Jana writes, “I have just returned from a trip to Paris with three girlfriends. Among other things, we visited the catacombs below Paris. Six million bodies were relocated there from other cemeteries around the city, pictures are allowed but without flash photography.

What the heck do you do when you are having your picture taken in front of a wall of bones? Do you smile? Do you not smile? Should you not take any pictures at all? #catacombsetiquetteproblems.”

Brendan Francis Newnam: This is a common problem.

Simon Doonan: I think you do a Victoria Beckham. You know, she’s very committed to not smiling when people take her picture. So when you’re in a catacomb, you just think what would Victoria do, and you do that face. It’s like a sort of girl’s version of a Zoolander face. I think that works at the catacombs.

Rico Gagliano: I would like to go online and see like what other people are doing. That would be a good Tumblr page I think, with just photos in front of the wall of bones.

Brendan Francis Newnam: Well, do you need a picture is part of my question? Can you just remember what it was like down there?

Simon Doonan: Well apparently, I mean, people just relentlessly document everything don’t they, to a degree that I find quite dizzying and incomprehensible.

Rico Gagliano: But a wall of bones, that’s a rare thing. I mean, I kind of want some kind of souvenir, and I don’t think you can take a bone.

Simon Doonan: I’m sure there’s a lovely postcard in the shop.

Simon Doonan: That’s what people used to do. Oh, let’s go to the shop and buy a postcard.

Brendan Francis Newnam: Postcard makers were the early Instagrammers. Simon Doonan, thanks for coming on and telling our audience how to behave.