If one does an etiquette segment on a radio show each week, eventually one runs into Miss Manners. The actual Miss Manners. We are happy to report she joined us not to correct previous guests’ (admittedly, occasionally dodgy) advice, but to tell us about her newest book, “Miss Manners Minds Your Business” – and to answer some listener questions, of course.

Brendan Francis Newnam: Each week you send in your questions about how to behave, and here to answer them this week is Miss Manners.

Her real name is Judith Martin, but since 1978 she’s written an advice column under the name Miss Manners. It appears three times a week in 200 newspaper worldwide, and she has a new book out called “Miss Manners Minds Your Business.” It is an etiquette guide for surviving the workplace.

Judith Martin: Thank you very much.

Brendan Francis Newnam: Or actually, would it be more polite to call you Miss Manners? How should we do this?

Judith Martin: Either one. I answer to either one.

Rico Gagliano: Did you ever think about maybe legally changing your last name to Manners?

Judith Martin: Certainly not! And have spend the rest of my life with people telling me they’re afraid to eat in front of me, and things like that? No.

Can one be immodestly polite?

Brendan Francis Newnam: This actually leads nicely into our first question. I’m sure you get this question a lot, but we can’t resist. What is your most common etiquette lapse? Because I’m sure you’re not a perfect human being.

Rico Gagliano: We hope you’re not.

Judith Martin: I’m sorry to say I am. Admitting that may be construed, in itself, as a lapse but I’m trying to answer your question, and I have to confess that I do not have etiquette lapses.

Judith Martin: It’s not charming. I would have avoided it if I could possibly think of something that I had ever done wrong.

Brendan Francis Newnam: All right, well you say it in such a charming way, I think it works out.

Brendan Francis Newnam: That’s a question about you, but let’s talk about your book for a moment, which focuses primarily on business. What’s the most common etiquette question you get from readers as it relates to the workplace?

Judith Martin: Well, as you know, the workplace has gotten very volatile. People are upset by the other people with whom they work, and their chief problem seems to be that there is a confusion between the personal life and the work life.

When you asked me just now if I would want to change my name to Manners, that would mean that I would have only a professional identity, and that’s what most people are doing nowadays. And it’s a huge mistake.

We’ve seen this peculiar reversal where people use social manners at business, and business manners in their social lives. So, on the job they’re giving baby showers and exchanging presents at Christmas, and celebrating birthdays, hanging out after work.

In their private live, they’re using business manners. You want to fall in love, you take out an ad and then you run interviews as tersely as you can, and if you see a possible prospect you put them onto an ‘internship’ for a while to see if it will work out, and so on. And I have even had letters from people who told me their relatives were charging them for Thanksgiving dinner. 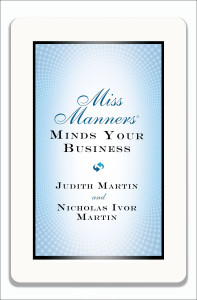 Rico Gagliano: Wow. So what is your advice? How do we break out of this cycle?

Judith Martin: Well, it’s of course context-specific. What is the situation? But generally: have a private life and a professional life.

Brendan Francis Newnam: I’ve worked with Rico for years, and he doesn’t know my real telephone number, so…

Judith Martin: Good for you.

Brendan Francis Newnam: He just found that out.

Judith Martin: He can’t call you in the middle of the night.

Brendan Francis Newnam: All right, our listeners have submitted some questions for you. Some of them relate to the workplace, others don’t, so let’s begin.

“Hanging out” is not your job, and the lost art of discretion.

Rico Gagliano: We’re gonna start with a question from Islay. She contacted us via Facebook, and she says, “I adore some of my workmates and find others irritating to no end. How do I engage in activities with the coworkers I do enjoy, without alienating the ones I don’t like? Note, the undesired coworkers are overly zealous to hang out, and they are upset when they are not included.” So this is getting right to your point right here.

Judith Martin: Yes, and I’m assuming the ‘activities’ and the ‘hanging out’ are not another way of saying work. You have to work with them whether you like them or not.

Rico Gagliano: I can’t fire my coworkers? What’s wrong with this world?

Judith Martin: One thing is, don’t stand in the middle of the office and say, “Let’s all go out for drinks,” and then say, “You, you, and not you.” Keep it private, don’t post it on Facebook, and don’t make a general announcement. You quietly arrange to meet the people you like on your own time.

Rico Gagliano: What happens is one of the other coworkers says, “What are you doing after work?” And they’re like, “Oh I’m gonna go out with Rico and Brendan.” And that person says “Why don’t I get to hang out with those cool dudes? That’s not fair.”

Rico Gagliano: That’s it. In a way you’re kind of being secretive. Don’t let them know where you’re going.

Judith Martin: Yes, discretion. A lost art, by the way, in many respects. There was always a rule that you don’t discuss social events in front of people who are not invited.

This has been totally demolished by people posting their social events online for everybody to know. Not a good idea, because people do resent being left out. So you make your arrangements discretely.

Brendan Francis Newnam: And also you could wear disguises if you’re going somewhere nearby.

On cyber-security and other convenient excuses.

Brendan Francis Newnam: All right, so we have another question, this one comes from Matthew. He sent it to us via Facebook. Matthew writes, “I have a question for Miss Manners: I’ve recently started an internship, and instead of providing me with a computer, they’ve asked that I bring in my own laptop and have them download all of their stuff onto it. This is a big company, so it’s not like they can’t afford to give me a computer. Is there a polite and professional way to tell them that I don’t feel comfortable taking over my computer for a temporary internship?”

Judith Martin: Unless this person was told that bringing a laptop is part of the job, I very much sympathize with the fact that he doesn’t want to use it – but he’s not in a very strong position as an intern.

I think what I would do is say, you know, “I use my personal laptop for a lot of different things, and I can’t guarantee that everything concerning work would be kept confidential.” And that ought to scare them.

Brendan Francis Newnam: Yeah, but Miss Manners, that is a bit of a lie. You could say that to maybe get them to give you a computer–

Judith Martin: It’s not a lie at all! Everything that goes on a computer – you know this – is going to be available to somebody.

Rico Gagliano: He’s using that as an excuse. He really just doesn’t want to do it because he doesn’t like it.

Judith Martin: In the etiquette business, we don’t use that term, lie, the way you do.

Brendan Francis Newnam: So I’ve learned today that I can be immodest, I can lie…

Brendan Francis Newnam: All right, this has been a real education.

Judith Martin: You have not learned those things from me.

All is fair in love and etiquette-gang wars.

Here’s the last question, and actually this is from us. Regular listeners to the show know that we often have Lizzie and Daniel from the Emily Post Institute here to answer etiquette questions.

Rico Gagliano: That is right, and our question is: is it impolite to be having you on our show?

Brendan Francis Newnam: Should we be loyal to the Posts?

Judith Martin: I’m sure that in the etiquette business, we do not have those kinds of rivalries.

Judith Martin: We all recognize that there’s a tremendous etiquette crisis going on. The more of us who pitch in, the better.

Rico Gagliano: So you ‘re like an army basically. Together, you form an army of politeness. 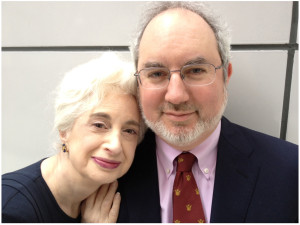 Judith Martin: Certainly not. We’re all working for the same cause.

Rico Gagliano: All right. Miss Manners, Judith Martin, thank you very much for telling our audience how to behave.

Judith Martin: Well, I’m delighted to have been here.