Michael Cera: John Waters came and saw the show, and he said, “Your body English is really loud.” I never heard that expression before, but that was kind of cool.

Brendan Francis Newnam: It would be interesting if he said your body English had an accent.

Michael Cera: [Laughs] Exactly. “Your body English seems to be not a first language.”

Brendan Francis Newnam: So how did you decide to make your character, Warren, such a physical presence with his hands digging deep into his pockets and his loping gait?

Michael Cera: You know, you’re rehearsing for like every day for a month or so before we start doing it in front of an audience. That stuff kind of just creeps in, I guess, the more discussions you have, the more you kind of understand the character and talk about it and conceptualize the blocking and everything. And also kind of playing off of Kieran [Culkin].

Brendan Francis Newnam: And then, unlike a movie, you inhabit this character night after night, for months. This is your first big stage production. What have you learned about theater versus working in television or movies?

Michael Cera: What I would say is that the challenge is to keep discovering, you know, while doing that. Not get too set in who the guy is, and to constantly be in a state of discovering, because that’s what’ll keep it alive.

Brendan Francis Newnam: Keeps it alive for you.

Brendan Francis Newnam: You also have a live audience and you can see how they respond. Have they helped you discover things about your character? 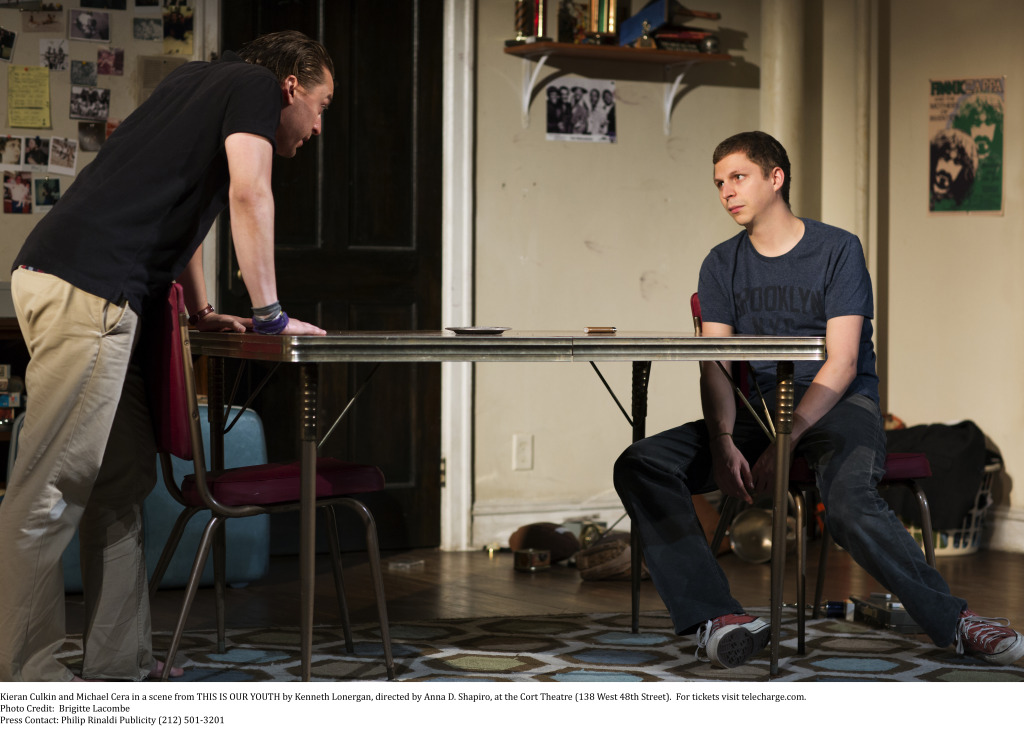 Michael Cera: Not really. I mean, the audience, you know, the audience can be kind of… the audience wants to have a good time, and they want to laugh, and part of what can lead you into kind of getting set into your performance is knowing, “OK, this moment coming up, I can get a nice laugh,” and kind of playing to that. You can limit yourself that way, if you kind of just crank out the beats.

Brendan Francis Newnam: It must be really hard as an actor, though, to not respond to that.

Michael Cera: Yeah, because that’s your validation, especially in a play like this, where you do kind of measure how we’re doing based on laughter, even though it’s got much more going for it than just laughs, I think.

Brendan Francis Newnam: While I was prepping for this interview, I got a chance to see “Crystal Fairy” which was a smaller indie film you were in recently. And in it, you play kind of a jerk. I was wondering if it signaled the beginning of a shift away from playing socially awkward teens?

Michael Cera: Yeah, I guess that might be kind of how it seems I guess, if you’re outside looking at someone’s work. From the inside you’re much less kind of puppeteering your own career as you are kind of living your life and navigating it as best you can.

Brendan Francis Newnam: Is it true you were kind of a rabid Bill Murray fan?

Michael Cera: Sure, yeah, of course!

Brendan Francis Newnam: So when you got into acting, were you looking specifically to do comedy stuff?

Michael Cera: Well, it started when I was like nine, you know, I was just kind of…I had no plan, I didn’t even really think I could work in front of a camera, it didn’t really start like that. It just kind of went there and it was exciting. I was just following it, hoping it could continue. When you’re nine you’re going to school and you’re not thinking about your life, really, and just the thought that I could keep working on more things was so alluring that I just kept trying to follow that and working toward it.

Brendan Francis Newnam: So you just kind of found a joy in performance?

Michael Cera: Yeah, it was great. It was so fun. It’s so unusual to be, you know, in a commercial when you’re nine and you’re at school and kids are like, “I saw you on TV.” It’s really strange. And I always had fun, everyone was always really cool with me. When you’re nine and you’re working on a production, you’re working with older people and you’re a kid, that’s unusual, and everyone was so kind and encouraging with me. It just was good for me. It was something I could do.

Brendan Francis Newnam: So, we have two standard questions we ask our guests. The first question is, what question are you tired of being asked in interviews? 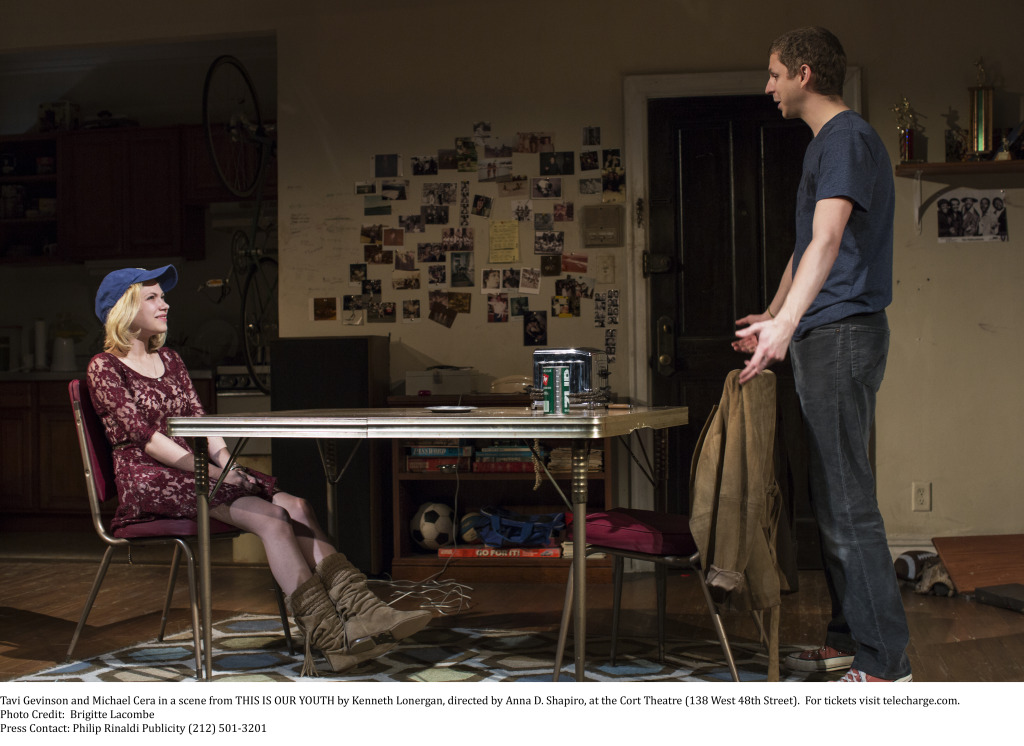 Michael Cera: Let me think. Let me try and be honest now.

Brendan Francis Newnam: Wait, were you not being honest before?

Michael Cera: [Laughs] People ask about “Arrested Development” all the time, to the point where it becomes kind of…you just start to feel kind of lame, constantly repeating that you don’t know anything, so I guess I find that question annoying because it makes me boring.

Brendan Francis Newnam: So they ask you like, is this going to be a movie?

Michael Cera: Yeah. I always…I have nothing. And every time I say I don’t know they just go, “OK.” It just makes you feel totally inadequate.

Brendan Francis Newnam: But it’s also interesting. I mean, how lucky you are, if you were into comedy and into Bill Murray, to do “Arrested Development” and then kind of get into the Judd Apatow community.

Michael Cera: It’s not lost on me at all. It’s a total miracle that that show happened to me and that I got to be around those guys. That’s a huge part of my life. And the most amazing thing about all those guys, Will Arnett and David Cross and Bateman and Tony Hale and all those guys, was they would never change their behavior around Alia [Shawkat] and me. That’s my cousin on the show, Alia.

Brendan Francis Newnam: And you were both adolescents at the time.

Michael Cera: Yeah. And it’s not like we would walk into the room and they would censor themselves. And that’s amazing, it’s incredible that we were fourteen and they were thinking of us as equals. Or they were just, they just didn’t have…

Brendan Francis Newnam: They had no boundaries.

Michael Cera: Exactly. And that was great, because it really felt like we got to be hanging out with those guys.

Brendan Francis Newnam: You may have just upset your parents right now, if they heard this interview.

Michael Cera: My mom was around, and she knows. Jason Bateman said the most insane things to me in front of my mother.

Brendan Francis Newnam: And your mom was okay?

Michael Cera: Yeah, I mean, she just would laugh, you know. It’s too insane.

Brendan Francis Newnam: Well, our second standard question is, tell me something we don’t know. It could be a personal item that you haven’t shared in interviews, or it could be an interesting fact about the world.

Michael Cera: Jeez. I wonder what I can say. Well, this just popped into my head. I don’t know. It’s not really worthy of anyone else’s dinner conversation, but I got to have lunch with Gene Wilder one day. I had just finished working on this really big project, it was like six months, “Scott Pilgrim Versus The World,” and worked with Jason Schwartzman on that. And afterwards, I had no idea what to do with myself, because it’s weird, you know, you go from working every day to nothing. I was just kind of…

Brendan Francis Newnam: In this lull?

Michael Cera: Yeah, this like, free-fall. And Jason said, “Why don’t you just call people that you love and ask if you can have lunch with them?” And I was like, “I’ll do that for sure.” So I asked my agent, “Hey, can I get in touch with Gene Wilder?” And I got his phone number and he was expecting my call.

Brendan Francis Newnam: Why Gene Wilder of all the people in the world?

Michael Cera: I think he’s amazing. I had just read his autobiography so he was on my mind. And I called him and he was like, “Michael, hi! I’m shaving right now. And there’s shaving cream in my ear.” And I went, “OK,” and he goes, “Well, why don’t you come down to San Diego and have lunch with me?” I went down there and I brought him a jar of honey.

Brendan Francis Newnam: Why did you bring him honey?

Michael Cera: His wife and him were sick and I just wanted to bring something, some kind of a gesture.

Brendan Francis Newnam: You should have brought him aftershave.

Michael Cera: Yeah, that would have been good. Or a razor. Yeah, and he just talked about everything. He told me a story about Jean Renoir, he had lunch with Jean Renoir one time.

Michael Cera: Yeah. And Renoir was sitting, and a ray of sun was hitting his eye, and a tear kept coming out of the eye, a constant stream of tears, and Gene finally said “Hey, do you want to switch seats?” And he goes “No, no, the sun feels good on my sore eye.” Isn’t that so sweet? It was just a great moment in my life and then we hugged, and I drove off, and he was waving goodbye, and I haven’t seen him since, but that was something I’ll always be thankful for.

Brendan Francis Newnam: This interview has just become, like, we’re in Thanksgiving, it’s like the turducken interview, like, I get to interview you, and I feel like I just got to interview Gene Wilder a little bit. He lives in you, Michael.

Brendan Francis Newnam: Why are you crying right now?

Michael Cera: [Laughs] It was just a nice day.

Brendan Francis Newnam: I thought it was the sun, baby.