French movie star Marion Cotillard may be best-known to U.S. audiences for her roles in blockbusters like Christopher Nolan’s “Inception” and Woody Allen’s “Midnight in Paris.” She won an Oscar for playing Édith Piaf in 2007’s “La Vie en Rose,” and now she’s up for another Oscar, for the movie “Two Days, One Night.”

In the film by the great Belgian filmmakers Jean-Pierre and Luc Dardenne, she plays Sandra who returns to her factory job after battling depression, only to find her workplace is holding a vote about whether she should keep her job. If her co-workers vote to fire her, they will each get a bonus of 1000 euros. Sandra has one weekend to convince them each to vote for her.

Rico Gagliano: Why did the role of Sandra appeal to you?

Marion Cotillard: First of all, I never expected that the Dardenne brothers, who I admire so much, would want to work with me, because they usually work with Belgian actors. When I read the script, it made sense for me to be a part of this project, because of the questioning that I always had about how our society creates isolation and pushes people to think that they are useless, they are worthless. 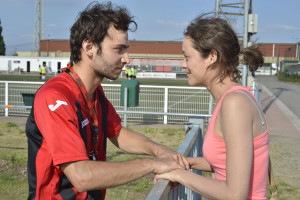 Rico Gagliano: Why is that such an important issue to you? It’s true, a previous film you made, “The Immigrant,” touches on similar issues.

Marion Cotillard: Well, because I think if we are on Earth, there’s a reason, and I think it’s really our society that created this. I don’t think in Indian tribes, they questioned their place in their society. I’ve always been interested in what we create. Society has created needs that turn us against each other. If everybody would just show solidarity and look at each other, I think we would live in a much better world.

Rico Gagliano: Actually, this speaks to something that I noticed while watching the film. Every time your character, Sondra, visits a co-worker and tries to convince them to vote for her to keep her job, particularly the people who are thinking of voting against her, they always ask “How is everyone else voting?” and it feels to me like the message is, if enough people opted to help their fellow men, everyone would follow suit.

Marion Cotillard: Yeah, of course. I mean, deeply inside, we’re all good people, and then a lot of things take us away from this connection of love that we all have when we come to this world. Sometimes, it doesn’t take much to reconnect this link of love.

Rico Gagliano: It is such a beautifully simple idea, this story. It’s basically the same scene, enacted over and over, of this desperate woman arguing for her job with a succession of people. But, that’s also a risk, right? It can boring and rote. I was never bored while watching it, and I was trying to figure out why.

Marion Cotillard: When I first read the script, I saw that it would be a challenge to create something different each time. Yes, she goes to see all those people and say almost the same thing. But then, in this ‘almost,’ I saw all the differences. When she gained confidence, when she loses it, and I really worked on all those little differences to keep it alive.

Rico Gagliano: What would you do, I wonder, if you were one Sandra’s low-income workers, faced with this decision?

Marion Cotillard: There’s something that I love in this movie, is that there is no judgment of all those people she goes to see. They’re not bad guys. They’ve chosen their bonus because they really need it, and she knows it. Going to see them, it’s very hard to go and see them, because she knows what it means. A thousand euros. Of course, the question came to my mind, and I questioned myself. But then, this is kind of hard to compare. I come from a family where there are a lot of factory workers and people that are sometimes struggling with finding money, but there’s nothing in my life that can be compared to her situation. I was never in that situation where I struggled to feed my kids. I would say of course, I would have given my bonus, but… 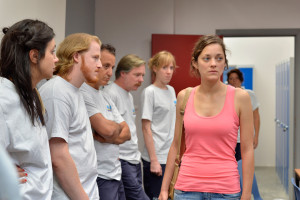 Rico Gagliano: It’s not so easy.

Marion Cotillard: It’s not so easy.

Rico Gagliano: A little more of a frivolous question. This is your second Oscar nomination?

Rico Gagliano: Is it actually fun if you are nominated, to be at the Oscars? You won your first time. I’m sure that part was fun, but I remember reading a David Mahmood essay, where he said the whole thing is basically a chance for regular folks to see stars squirm for a change.

Rico Gagliano: I’ll take it. We have two questions that we ask everyone on this show.

Rico Gagliano: And, the first one is pretty straightforward. I may have just asked it, actually. What question, if we were to meet you at a dinner party, are you tired of being asked?

Marion Cotillard: “What is the difference between French or European cinema and American cinema?”

Marion Cotillard: There is as much difference between two American movies, let’s say, from Woody Allen and Chris Nolan, than between two French movies, Jacques Audiard or Jean-Pierre Jeunet. I mean, what is amazing in this job is every movie is unique. Every director is unique.

Rico Gagliano: Well, actually, this maybe leads well into our second question, which is usually “Tell us something we don’t know”, but I’m actually a big fan of the Dardenne brothers, and I think a lot of people in the States are not familiar with them. Maybe you could tell us something unique about them?

Marion Cotillard: Well, they’re geniuses, but what was interesting, when I started working with them, the first and the second day, they would talk about the audience all the time. When sometimes, on a set, and for some directors, the ‘audience’ word is a bad word.

Rico Gagliano: Like, a four-letter word. They have this grand, artistic vision and the audience is disdained.

Marion Cotillard: Yeah, yeah, but they always talk about the audience. I thought that was kind of a relief, because we do movies for them. We tell them stories, the three of us, because we love human beings.