While she insists she’s not prolific, the fact remains author Margaret Atwood has published 21 works of fiction, 11 non-fiction books, and 15 collections of poetry. Among her landmark titles are “The Handmaid’s Tale” — a cautionary tale of a repressive paternalist future — and the Booker Prize-winning “The Blind Assassin.” Her newest novel, “MaddAddam,” is the conclusion of a dystopian trilogy that integrates her real-life environmental activism into a fictional post-plague world inhabited by genetically modified animals and humanoids.  Rico chats with Margaret about the end of humanity and why we’d laugh through it, then the two of them hatch a surefire Hollywood hit.

Rico Gagliano: And Margaret, it is an honor.

Rico Gagliano: So you’re known for this kind of dystopian fiction — “Handmaid’s Tale” is also dystopian in a way. That genre draws a lot of power, I think, from making us think about how easily civilization could collapse. Early in the book you mention the chaos that would ensue if something as simple as sewage or water pumps stopped working.

First of all, is this how you see the world? Like when you’re walking down the street, do you just see accidents waiting to happen and systems waiting to collapse?

Margaret Atwood: Let me say a couple of words to you.

Rico Gagliano: Do you suffer a lot of those up in Canada, where you’re from?

Margaret Atwood: Oh we’ve been through some of them. Okay: “flood.”

Margaret Atwood: Or Calgary this summer, or Toronto we had one. Or I could also say, in Los Angeles: “mudslide.”

Rico Gagliano: Indeed, we suffer through those as well.

Margaret Atwood: Yes, and whenever it happens you always say, “This never happens.” In fact, it happens frequently. Or I could say: “earthquake.”

Rico Gagliano: These kind of things are happening more frequently it seems.

Margaret Atwood: Yes, but it is very true that all of the things that we take for granted such as, you know, the lights turning on when you turn the switch, and your room being not too hot and not too cold, and there being a supply of food… all of those are dependent on a cheap and constant supply of energy.  And when that turns off, such as in an ice storm or a flood, people tend to run around like ants when you pour hot water on them.

Rico Gagliano: Do you remember a moment  — because you’ve been doing this for quite a while, these kind of books — a moment when you realized the fragility of civilization?

Margaret Atwood: Oh I think about 1948, the decade when humanity was introduced to the atom bomb.

Margaret Atwood: So people of my generation, it wasn’t plagues that were on our mind quite so much, although for an earlier one it was because they’d been through the 1919 influenza, which killed a lot of people. For us, it was the silly instructions we were given about, “Hide under the desk!” The atom bomb goes off, “Just get under the desk, it’ll be fine.”

Rico Gagliano: Do you ever watch TV shows, by the way, like “Doomsday Preppers,” about survivalists? I would be curious about your opinion of those.

Margaret Atwood: For me those are late, you know? I was reading stuff like that long before they happened along. This stuff has been around for a long time. All you need to do is read some Jack London in your youth and you’re all set up for it.

Rico Gagliano: Definitely, there have always been survival tales, but what I’m saying is I think audiences watch “Doomsday Preppers” to scoff at the people on them, you know? “Oh, these silly people who are spending so much time preparing for a disaster that may never come.”  Do you see these shows differently?

Margaret Atwood: It’s silly until it happens. Like just about anything. Like, “Automobiles are fine, I’m totally safe in them, I feel comfortable in them,” and that goes on until you have a crash.

Rico Gagliano: So you take these shows seriously? 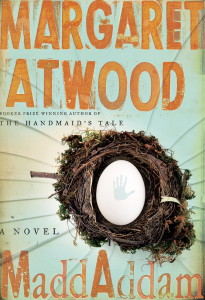 Margaret Atwood: Well, it’s like anything.  You get into a plane and if you think for a moment, you’re thinking, “Why would I do this? Why would I get into a big chunk of metal and expect it to go up into the air?” It’s really quite crazy.

Rico Gagliano: But of course we know that that’s actually one of the safest modes of transportation there is.

Margaret Atwood: That’s certainly what we’re told.  So I think my point is I don’t spend a lot of time worrying about it.  Even though these possibilities exist around every corner.

Rico Gagliano: Yet for years you’ve freaked us out by writing about it.

Margaret Atwood: All right, so let us suppose that you’re writing a book and you write, “The sun was shining. I had a lovely breakfast. I took the dog for a walk. I went to my afternoon jog.  It was really nice, came home…”

Rico Gagliano: You’re not describing a best seller, is what you’re saying.

Margaret Atwood: Yes. I go back to advice from the Greeks: start in the middle, at a moment of crisis.

Rico Gagliano:  We’ve talked a lot about the sort of dystopian aspects of this book, but it does have a lot of wry comedy in it. The narrator has a very cool, very ironic voice. I’m wondering if that is to make the dire aspects of the book more palatable?

Margaret Atwood: I don’t think people lose their sense of humor just because the human race has been obliterated.

Rico Gagliano: That’s the last thing that gets destroyed by a plague, is our sense of humor about it?

Margaret Atwood: Unless you’re actually at the screaming and melting point, you don’t actually change into somebody else. That would be my guess.

I mean, some books on those themes, everyone’s very dour all the time, but I don’t think it would necessarily be like that. I think there would be a lot of gallows humor jokes.

Rico Gagliano: Yeah right, along the lines of you know, war novels like “M*A*S*H” or something.

Rico Gagliano: We have two standard questions we ask guests on this show, and the first one is, if we were to meet you at a dinner party, what question should we not ask you? What is the question you’re tired of being asked?

Margaret Atwood: Okay: What they shouldn’t ask me at a dinner party is, “So, you planning your funeral?”

Rico Gagliano: Has anybody ever asked you that?! ‘Cause that’s insane!

Margaret Atwood: Not quite in so many words, but instead they say, “What have you got on your bucket list?”

Rico Gagliano: That is the most impolite thing I’ve ever heard of.

Rico Gagliano: It’s not like you’re, you know, on the edge of death or something. What would prompt such a thing?

Margaret Atwood: I think it’s the “old” part, you know — the ‘O’ word. But of course a 20-year-old thinks anything over about 40 looks pretty old to them.

Margaret Atwood: Similarly — I mean everything’s relative — I have to restrain myself from going around pinching the cheeks of everybody under 50 and saying, “Oh you’re so cute! How did you get this job? You’ve got a job? That’s so adorable.”

Rico Gagliano: That’s something you should not do at a dinner party.

Margaret Atwood: I shouldn’t do that, no.

Margaret Atwood: Oh I’ve got no idea what you don’t know.

Rico Gagliano: …Well, maybe something that you find people don’t know about the world at large, that you think would kind of impress them.

Margaret Atwood: Oh! Okay…  how about this: polar bears and grizzly bears are actually hybridizing.

Margaret Atwood: Well I don’t think… you know, you live in Los Angeles, don’t you? So I don’t think any polar bears are gonna come walking through your back door anytime soon.

Rico Gagliano: But just what we needed, another reason for people to move here.

Rico Gagliano:  By the mega-bears.

Margaret Atwood: I don’t think you’ve heard of the “gun” word. It’s a thing where you pull something and there’s a bang.

Rico Gagliano: You think they’ll be more likely to fight off the mega-bears than flee to So Cal?

Rico Gagliano: There’s your next novel by the way. I think we just wrote it.