Lindy West got her start as a film critic at Seattle’s alt-weekly The Stranger. But she soon found her voice speaking out on topics like racism, sexism and fat shaming. Her deftness in using all things internet earned her the Women’s Media Center “Social Media Award.” West’s first book came out this week — it’s a memoir called “Shrill: Notes from a Loud Woman.”

Brendan Francis Newnam: In one especially funny chapter you talk  about the lack of big female role-models as a child. Can you talk about a few that did exist… and what you thought of them?

Lindy West: Mrs. Potts from “Beauty and the Beast.” She’s a teapot…a teapot with a hat who talks, and then, at the end — spoiler, sorry, for people who haven’t seen “Beauty and the Beast” — she transforms into the world’s oldest woman. And then, there’s Ursula the sea witch from “Little Mermaid,” who’s also a horrible monster. There is…who else did I do?

Brendan Francis Newnam: You have Miss Piggy, which is probably the one that comes to mind for a lot of people.

Lindy West: Right, Miss Piggy is definitely the one that comes to mind.

Brendan Francis Newnam: You had ambivalence about Miss Piggy, right?

Lindy West: Yeah. A lot of fat women are like, “Yeah, Miss Piggy’s my idol!” And then I started thinking about Miss Piggy and how she actually made me feel as a child, and she made me feel really uncomfortable because she’s really sexually aggressive in a way that violates Kermie’s boundaries… And, I mean, and that taught me things about myself, like what my options were, you know, when I became an adult. Like, OK, well, you can be a scary witch, or a sexless grandmother or, like, a weird pig/rapist. I’m sorry! Sorry. I’m so sorry!

Brendan Francis Newnam: No, that’s OK. Those are words that we’re allowed to say [on the radio.]

Brendan Francis Newnam: Those examples, or the lack of examples you had as a child, kind of talks about society’s larger problem with — you use the word “fat” in your book — but, like, bigger people. In many of your chapters, you talk about the evolution of you gaining your confidence, and then it culminates in an incident at The Stranger, which is where you began writing — the alt-weekly in Seattle, very progressive…

Brendan Francis Newnam: Yes, helmed by Dan Savage, who is this pugilistic, progressive, LGBT rights advice columnist. Can you kind of, in a nutshell, talk about what…what went on between you and Dan?

Lindy West: So, it was… I think 2010, 2011, and at that time, even more so than right now, it was just very fashionable to “tell it like it is” about fat people — like, “OK, we need to quit making excuses for fat people and acknowledge that they’re just lazy and gross and a drain on the healthcare system,” etc., etc. And so, Dan was on that train.

Brendan Francis Newnam: The lens in which he was looking at it was health, right?

Lindy West: Right, but, you know, as a fat person, that reads differently. 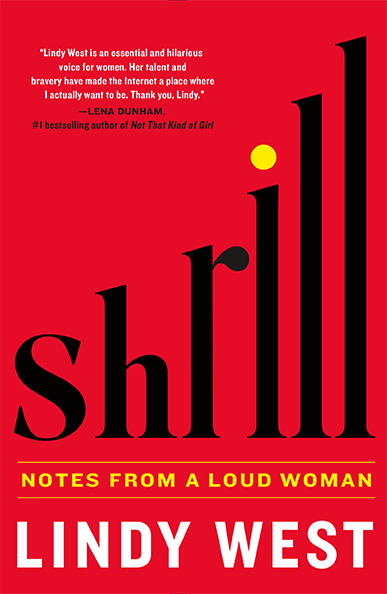 Lindy West: You know, if you make me feel dehumanized and [like] this scourge that we need to have a national war on, that doesn’t make me feel like you care for my health because it’s certainly not good for my mental health, and it’s honestly not good for my physical health. If you are hammering into me that I’m something that needs to be eradicated, then I don’t want to take good care of myself, you know?

Lindy West: So… these posts about fat people that weren’t, like, super hateful, but kind of snide and felt cruel to me. So, long story short, what I did was I wrote a very long post called, “Hello, I Am Fat,” because that wasn’t something that I had said out loud before. It wasn’t… I didn’t self-identify as fat because what you’re taught in our culture is that fat people aren’t fat; they’re thin people who have failed. And I got really fixated on the idea that fat people exist now, whether you want them to exist or not, and we have to figure out how to accommodate fat people.

Brendan Francis Newnam: Yeah. And the fallout was?

Lindy West: And the fallout was that he was really mad. The fallout was really fascinating, actually. You know, it sparked this huge discussion in the comments. There were a lot of fat readers who wrote to me and said, “Thank you so much,” and then there were a lot of people saying horrible things about me, which is fine; I expected that. And then, Dan wrote a response that was kind of…I think it was written in a moment of high emotion because it was a really intense exchange and…

Brendan Francis Newnam: You kept your job at The Stranger, and I feel like that post kind of set you on the path of being a writer who focuses more on social justice issues.

Brendan Francis Newnam: After The Stranger, you went to Jezebel, a blog that caters to women readers, and there you got in another high-profile dust-up, this time with the comedian Daniel Tosh, who you took to task for saying rape jokes were always OK, and it became another big Internet to-do.

Lindy West: And so…and there was this big national conversation going on about rape and misogyny in comedy because of this incident with Daniel Tosh yelling about how rape is always funny. I wrote about it, and that kicked off, like, a two-year cycle of constant abuse from…

Brendan Francis Newnam: From trolls on the Internet.

Brendan Francis Newnam: …You talk about [how] you loved comedy, you performed comedy — [and] you write at one point, “I wish I had never got political about it because I had to give up my funny card,” and that you have trouble watching stand-up comedy.

Brendan Francis Newnam: Was it worth it?

Lindy West: You know, honestly, I don’t know. I think so. i think so, but I mourn that a lot. You know, I used to identify as, like, a funny person and a humor writer.

Lindy West: And now, I just get people — still all the time — like male comedians using my name as shorthand for this sort of humorless, feminist, anti-comedy…like, this, I don’t know, grim reaper of…

Brendan Francis Newnam: This kind of wet blanket on humor.

Lindy West: Yeah, exactly. Exactly. I’m, like, the number one wet blanket, which is simply not true.

Brendan Francis Newnam: Yeah. So, for you, comedy is particularly charged because this was an ongoing thing where people were saying horrible things to you, but… how do you draw the line? For someone who wants to be a good human, and to become a better human and evolve, but still is coming home from work and turning on Netflix and taking something in, have you devised, maybe, a rule of thumb for yourself about what is acceptable and not acceptable?

Lindy West: I mean, it’s so hard because there’s pretty much nothing that you can watch that’s not a problem. Basically, my rule of thumb is: I’m going to watch and read things that make me happy and that I find interesting but make sure that I’m doing that with a critical eye and that I’m being, also, vocally critical about things are, I think, harmful in the broader scope of society.

Lindy West: And, you know, when you say, “Was it worth it?” and I hesitated, that was purely selfish. I think in a broader way, it was absolutely worth it. I think that that conversation really opened a lot of people’s eyes to the fact that it’s possible to critique art forms that we love and make them better, and that it emboldened a lot of women in comedy to kind of band together and speak with one voice and change that culture. And so, that’s totally worth it.

Lindy West: It’s progress. Yay, we did it!