Who better to tell us how we should behave than Ralph Nader? In the 60s he was a crusader for car safety reform. The fact that your car comes standard with a safety belt is largely due to his work. He founded the consumer advocacy group Public Citizen in the 90s. He ran several times for president of the United States. All the while he’s written hundreds of columns about civil rights, the environment, corporate power, and other issues. Many of them are collected in his new book called Told You So: The Big Book of Weekly Columns.

Brendan Francis Newnam: Ralph, you’re here to talk about etiquette. The title of your book is Told You So. Obviously, you’ve had cause to say that in your career but should someone say that? Is that an effective strategy for winning hearts and minds?


Ralph Nader: I haven’t said it in 50 years but I was forced to say it by an important point that I want to make and that is many prominent people have said “do this, do that, invade Iraq, get rid of regulation of Wall Street, push for nuclear power, all these things and good things would happen,” and they were wrong. We did the opposite.

Rico Gagliano: It’s polite to say I told you so if you were right?

Brendan Francis Newnam: That leads to our next question. The columns in this book, they span from the 70s to the past few years. They are not in chronological order. What struck both of us is that so many of the issues you’ve addressed, nuclear power would be one of them, economic inequality, they’re still issues. It seems like that would be discouraging. What keeps you in this game? 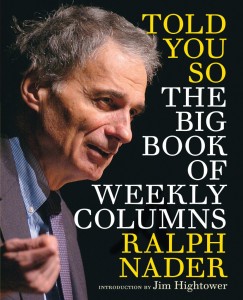 Anybody can be right if a) they do their home work and don’t deal in myths and focus on reality and b) if they don’t censor themselves and speak forthright they can be much more accurate than the wrongdoers or the Wall Streeters have been.

So, the answer to your question is simple. I don’t like white flags of surrender and I don’t like giving up. I think we have a fiduciary duty with the American people when we know things they don’t know that they should know to keep at it.

How to handle a heated dinner party debate

Brendan Francis Newnam: We know that you are comfortable speaking truth to power so hopefully you can speak truth to some of our listeners.

Let’s turn to our questions.  Judith in Omaha, Nebraska writes, “How do you handle a dinner party in which the guests get into a heated debate? The example I’ll give is when we had some (former) friends over for dinner and the wife of this couple got into a heated debate with my mother-in-law about nuclear weapons. The incident was one of many that led to the end of that friendship.”

Rico Gagliano: What do you do?

Ralph Nader: Well, the flip answer is Omaha, Nebraska? Warren Buffet lives there. Why don’t you just saunter over to Warren’s home because he’s against nuclear weapons and their proliferation.

Ralph Nader: The other one is this – this is interesting. When you see people at parties starting to get into a heated debate it becomes clear after the second or third exchange. What you say is, “Excuse me. Can I be the moderator here? You both have strong positions. Let’s go at it in a little more organized way.” I think that usually does it.

Brendan Francis Newnam: Sure. That must be nice for you because no one wants you to be moderate if they invite you to a dinner party.

Ralph Nader: No, because at any dinner parties I’m at, they expect political discussion. It isn’t like “oh, you’re disturbing the calmness and the etiquette.” No.

Brendan Francis Newnam: They’re upset when you relax. Ralph, are you going to say something about this? You’re like what I’m just enjoying the lentils.

How to say ‘no thanks’ to canvassers

“How do you politely decline,” she writes, “when responding to street canvassers. She says I know it’s a stressful quota mandated job and they’re just trying to earn a living but is a smile and a no thanks more frustrating for them than just ignoring them?”

Ralph Nader: My mother had the best approach I think. She would always congratulate a canvasser because that canvasser’s participating in the democratic process. Agree or not agree and it’s not easy to stand on the corner or to go door to door and so she always praised them and then she asked what was on their mind.

It was a very nice exchange. Even when she didn’t respond favorably to them they just felt good because she recognized that their role was essential. They were speaking out. They were making the effort.

Brendan Francis Newnam: So you should engage them is what you’re saying? At least compliment them on trying?

Ralph Nader: Very much so because sometimes it’s the only way people can put an issue in the public arena is to go door to door if they can’t get on TV or in a newspaper or on radio.

Brendan Francis Newnam: But, Ralph, you’ve been in the public eye for decades now. Sometimes you’re running late for something and I’m sure people see you, they approach you. Do you feel like there’s more pressure on you as Ralph Nader to have to stop and listen and talk and congratulate and praise?

Ralph Nader: Yes, of course. I rise to that expectation because you have to practice what you preach and preach what you practice.  If you think people should have the right of free speech and you’ll defend them even if you disagree with them vigorously. You’ve got to give them the time of day.

Finding the best burger in D.C.

Brendan Francis Newnam: All right. This is a question that’s from John. We told our listeners that you were coming by and this was his question for Ralph Nader.

“Best burger in D.C.?” Not really an etiquette question, but…

Rico Gagliano: You’ve had to deal with some serious issues in your time, Ralph.

Ralph Nader: Go to a great restaurant that has a book store and a room for events, public events and debates, and great food at reasonable price. It’s called Bus Boys and Poets. There are about three or four of them now in the Washington, D.C., area.

Ask for the veggie burger. It’s a homemade veggie burger served with arugula, tomato on a wheat bun. You can skip the avocado because it’s not organic. Ask for the salad or fruit on the side.

It’s only $9 and the very atmosphere is exciting. There’s great art and great photography on the walls. You can saunter over to some debate or go over and peruse the books.

Ralph Nader: Well, when it comes to beef, yes.

Brendan Francis Newnam: You’re responsible partially for making sure that our beef supply is relatively healthy, right? Do you do some of the work you did…?

Rico Gagliano: There you go, John. Here is JR in California.

He writes, “One of my friends often chooses not to wear a seat belt in the car citing personal freedoms, etc. I find it completely ridiculous given the years of studies about safety. I’ve tried to convince him to humor me at least without much luck. Any arguments or should he just let it be?”

Ralph Nader: That reminds me of Ronald Reagan. He once campaigned in Michigan. He said “air bags an impediment to human freedom.” The press called me up and said what was my reaction.

I said in a narrow technical sense Ronnie was right. Air bags do block you from the freedom to go through a windshield. So to the friend of JR in California I would say he may want personal freedom but he won’t get another chance.

Brendan Francis Newnam: Ralph, do you have a car? As I understand it you don’t? You haven’t owned a car in quite some time, correct?

Ralph Nader: Yes, many, many years. If I did they’d put ads saying I endorsed the model. In fact, once in Minnesota there was a full page ad and Nissan, then called Datsun, said “Ralph Nader owns a Datsun.”

Rico Gagliano: You’ve got to give them props. That’s pretty good.

Brendan Francis Newnam: Ralph Nader, thanks so much for telling our audience how to behave.

Ralph Nader: Thank you. They’re very nice to ask me those questions.