In 1984, Jim Jarmusch made the laid-back, micro-budget film “Stranger Than Paradise,” won the Camera D’Or at Cannes, and arguably launched the indie film explosion that followed.  Since then he’s carved out a critically-acclaimed oeuvre that includes everything from surreal westerns (“Dead Man,” starring Johnny Depp), inner-city samurai films (“Ghost Dog”), and black-and-white vignettes featuring hep cats talking over coffee and cigarettes (the aptly-titled “Coffee & Cigarettes”).

In his latest — “Only Lovers Left Alive” — Jarmusch applies his intensely cool style and philosophy to the vampire genre, telling the story of a venerable bloodsucking couple who spin awesome records and read great literature while they sadly predict the end of the world as we know it.  He tells Rico what heralded this cinematic apocalypse, why he never has to listen to his detractors, and where he and Tom Waits buy all of their great ideas.

Rico Gagliano: This film is about a modern-day couple, Adam and Eve, who are also vampires. They’ve been alive for centuries and sadly feel civilization’s days are numbered. What led you to such a dark theme?

Jim Jarmusch: Wow.  I guess the current state of the planet.

Rico Gagliano: General enough for you?

Jim Jarmusch: Yeah. I mean, my attraction is… they are vampires and it is a vampire film, but it’s not a ‘monster movie.’ It’s a love story, and they happen to be vampires.  And my attraction to the genre was this kind of historic overview that they could then have if they were alive for a thousand years or whatever. That really was appealing to me: the insights one could have, and not be in denial as it seems we are at present.

Rico Gagliano: But, there you go; I mean, I don’t want to overstate the serious tone of the film, it’s also often funny, but that’s a pretty grim sentiment.

Jim Jarmusch: I don’t really feel that it’s grim. I feel that the things they do talk about are true, and they’re not denying them, but they are also appreciators of so many beautiful things.  Both natural things, and gifts of expression that humans have given us.  And that’s what they live for. I mean, that is their kind of blood supply, in a way: to appreciate beautiful pieces of music, to appreciate strange vegetation, to appreciate cloud formations. These vampires in our film, they are snobs in a certain way, but it’s because they’ve had the chance to think about and absorb all these things. They’ve had the luxury of that.

Rico Gagliano: Yeah, and in a way, your films, in addition to telling stories, are also kind of assemblages of music or people or places you find beautiful. There is one scene that almost literally does this: Adam is gazing at a wall, and he’s hung portraits of his heroes on the wall — I’m assuming they’re your heroes, as well — and they range from Edgar Allan Poe to Iggy Pop. What do all those folks have in common?

Jim Jarmusch: Well, they are humans that contributed something to the strongest thing that humans have, which is our imaginations. I mean, that’s my personal religion, you know? Because these are the things you cannot destroy: the human imagination.  And everything comes from it. All science starts with the scientist imagining a thesis. Imagination is stronger than armies, and banks full of gold, and prisons, and it can’t be contained or killed.

Rico Gagliano: You have this aesthetic, and among certain people – myself included – this aesthetic is the definition of cool. Did that come as a surprise to you when you first started making films? Does it now?

Jim Jarmusch: Yeah. First of all, I don’t analyze my films and I don’t look at them once I’ve finished them. I let them go. So, these things always surprise me, and being called ‘cool’ is a little… I don’t know quite what it means.

Rico Gagliano: Yeah. I don’t either! I couldn’t define it, but it just is.

Jim Jarmusch: But, I appreciate it, I guess. I use that word myself in a positive way. The one thing that really drives me crazy, though, is the word ‘hipster’ recently.  Because I seem to be called a ‘hipster’ a lot, and I’m like, “What is a hipster?” I think it’s something square people use to call people that aren’t straight!

Rico Gagliano: I think it’s actually something hipsters call people who are weirder than they are, to insult them! 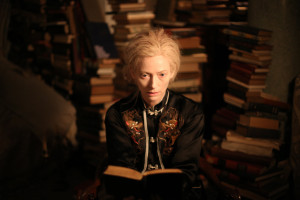 Jim Jarmusch: Maybe! It seems insulting. But I just follow my instincts. I don’t know. I’m not trying to be a poseur. I am myself.

I got a lesson very early on that was very valuable. Around the time of one of my first films, “Stranger Than Paradise”, which was in black and white.  Now, my hair started turning white when I was a teenager, gradually. And someone wrote, basically, “What a pretentious jackass! The guy makes a black and white film, wears black clothes, dyes his hair white. Who does he think he is?!”

It was very valuable, because I realized, from that moment, “Hey man, I started wearing black clothes as a teenager because of Roy Orbison and Hamlet and Zorro and whatever. My hair is genetically turning white. I happen to love black and white films.  So, wow, I never have to pay attention ever again to what anyone says about me, personally!”  So since then, people can call me whatever they want. I’m not trying to engender any of this hipsterish behavior. It’s just my style. So, gee, sorry if it’s too hip, I don’t know what to say!

Rico Gagliano: By the way, I love that constellation: Hamlet, Zorro, and Orbison. That’s an amazing trio.

Jim Jarmusch: Oh, I should put Johnny Cash in there, too. Let’s make it a foursome.

Rico Gagliano: “The Men in Black.” If only we could have seen that band perform.

We have two questions that we ask everyone who does this segment on our show. The first one is: If we were to meet you at a dinner party, which question would you least like to be asked?

Jim Jarmusch: Well, I think this is maybe too general, but it’s a question I get a lot from journalists, which is: “Where do you get your ideas from?” Which, really… what a perplexing question!

Rico Gagliano: If you could answer that, you’d just be grabbing ideas everywhere.

Jim Jarmusch: Yeah, it’s like, “I’ll buy them!  Do you have any good ones I could sell? I have twelve dollars here.”

Rico Gagliano: You’d have fifteen films by the end of the year.

Jim Jarmusch: So, that one’s always kind of really perplexing. “Where do you get your ideas from?” Although, I once had a great experience of sitting at dinner between Tom Waits and Neil Young, the night before Neil inducted Tom into the Rock and Roll Hall of Fame —

Jim Jarmusch: — Well, I think I’m lucky; I mean, what kind of circumstance, what was I doing there?! But, they were talking about songwriting and where their ideas came from.  And Tom was relating it to fishing, and Neil was relating it to rabbits coming out of a hole and how you had to wait for them and try to grab one. Tom’s like, “It’s like fish going by. Some of them aren’t even very good, but you’ve got to throw some back, and maybe you’ll get one, or maybe you’ll get none.” They went on and on with these beautiful metaphors of where their ideas came from, it was classic.

Rico Gagliano: You can just use theirs next time somebody asks you that.

Rico Gagliano: Those’ll work.  You kind of just answered our second question, which is to tell us something we don’t know. I now know how Tom Waits refers to his creative process.

Jim Jarmusch: Well, one thing, though: Tom Waits’ metaphors probably change by the hour, and just get more and more amazing.