Lizzie Post and Daniel Post-Senning, co-authors of “Emily Post’s Etiquette, 18th Edition,” are always on the cutting-edge of etiquette (tip: don’t use your Google Glasses to record video of people without their consent). While issues of “biotech-tiquette” might still be a few years away from the mainstream, they are also up to answer modern-day questions, from online dating to traditional printed wedding invitations.

Rico Gagliano: Often we pose our etiquette questions to a celebrity of note, but once a month we pose them to celebrities of etiquette, namely our friends Lizzie Post and Daniel Post-Senning. They are co-authors of ‘Emily Post’s Etiquette, the 18th Edition.’ We suddenly realized, so you’ve co-written 18 editions of this etiquette manual, it seems pretty-

Brendan Francis Newnam: Probably not all 18. Have you guys written all 18 editions?

Rico Gagliano: Well you know, you had a hand in the 18th one, and it seems likely there will one day be a 19th.

Rico Gagliano: What social developments do you think are gonna need to be addressed in the next edition?

Brendan Francis Newnam: What is the frontier of people being impolite right now? 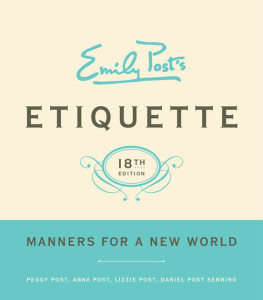 Rico Gagliano: What etiquette issues are brought up by that?

Daniel Post-Senning: “My glasses are giving me information based on face recognition software about the people I’m meeting with. Do I have to tell them?”

Brendan Francis Newnam: Google Glasses, that’s interesting. Dan, I think you just got yourself a job a Google.

Daniel Post-Senning: They’ve been distributing etiquette with Google Glass, cue cards that tell people suggested ways to use them to not give offense.

Rico Gagliano: What are some of the rules?

Daniel Post-Senning: When you’re indoors, take your Google Glasses, put them up on your head like sunglasses so people don’t think that you’re videoing, that’s one.

Rico Gagliano: And then they’re gonna develop Google Glasses that have another camera on the underside of the glasses-

Lizzie Post: So that you can still do it, right?

Daniel Post-Senning: Well, and people are already hacking them and getting them to do all kinds of new stuff. People can hack into your Google Glasses and see what you’re seeing.

Rico Gagliano: This is freaking me out.

Brendan Francis Newnam: All right, well when you write the 19th edition, we’ll hopefully have you here. Let’s turn to some questions that were sent in for you.

Brendan Francis Newnam: This first one comes from Jen in Atlanta, Georgia. Jen writes, “Often by the end of an internet date,” and I guess that means someone she connected with online on a dating website, “I find myself not liking my date, but I’m asked if I’d like to get together again. To avoid hurting feelings, I usually agree, and then either ignore later attempts at communication, or I text or email later saying we should just be friends. What is the appropriate way to turn down a second date?”

Lizzie Post: I think Jen’s doing herself a service, but not the other person a service when she accepts the date. She says “I don’t want to make them feel bad.” What you really don’t want is to make you feel bad about turning them down.

The real way to handle it Jen, is to be blunt from the beginning, and appreciate that someone was interested. You know like, “I really appreciate that you’re interested, but for me I don’t think this is gonna work out.”

Brendan Francis Newnam: But what about diluting it by saying- I’m thinking back to my second date days. What about if you generally said, “You know, I don’t know if I’m ready for dating right now.” Even if that’s not true-

Lizzie Post: Then why are you on a dating site dating?

Brendan Francis Newnam: Well I thought I was, but now I’m not. Because it seems like what you’re saying is “I don’t like you,” and that seems really painful. Isn’t there a way that-

Lizzie Post: Well come on, let’s get real. What’s really going on in this situation? You are saying “I’m not interested.”

Brendan Francis Newnam: It could be, but doesn’t social-

Rico Gagliano: Yeah I mean, let’s be honest, you guys are often telling us that we should be subtly you know, lying.

Lizzie Post: No, but now I’m telling you to be straightforward and generally true.

Daniel Post-Senning: Maybe you could try to table the decision. You know, I’m not ready to talk about a second date yet. I like to finish the first one first.

Rico Gagliano: Live for the moment.

Daniel Post-Senning: But at some point you’re gonna have to deliver the news, and maybe in person when it comes up is ultimately and kinder.

Lizzie Post: I have found that it’s not as hard and it doesn’t get as bad reactions as you would imagine.

Mister and Mister, or Messieurs?

Rico Gagliano: All right. We are gonna move from dating to wedding invitations. This is from Mike F. in West Hollywood, California, and Mike writes: “The problem I’m encountering is what to put on the line after the big M on RSVP cards. Being in a gay male marriage myself, I am trying to figure out the proper title to put before my name and my husband’s name. Can I put the word Messrs. on that RSVP line. No one I’ve spoken with knows the proper usage of Messrs. I personally like it because it has a nice formality to it, but is it too old fashioned?”

Lizzie Post: You could do Messrs. Traditionally Messrs. was used to represent brothers in a family, so if you were the Messrs. Smith, there is the chance that you could be confused with brothers.

Daniel Post-Senning: There could be some confusion there.

Daniel Post-Senning: And I would jump in there and just say that in some ways if you really want to assume the identity of a marriage using an “and” on the same line between two names is a great way to declare marriage and avoid the confusion that might emerge around Messrs. Smith.

Rico Gagliano: I do wonder what women do in this case though, because Miss means you’re single, right?

Lizzie Post: Right, Miss would be for a single woman, and if you had the Mrs.-

Daniel Post-Senning: There is an equivalent to Messrs. for Mrs., but it’s used so infrequently, most people wouldn’t know what to make of it.

Lizzie Post: I’m questioning, do we know what it is?

Daniel Post-Senning: It’s a contraction of the French, and I’m forgetting it at the moment.

Rico Gagliano: Yeah, you’ve got a lot of options.

Lizzie Post: Let’s get this into the 19th edition.

Daniel Post-Senning: That’s a definite follow-up question, cause it’s got-

Brendan Francis Newnam: There we go.

Daniel Post-Senning: It’s a good one, it’s a valid one.

Sip it or skip it?

Brendan Francis Newnam: All right, so this next question comes from David from Ft. Collins, Colorado, and he writes, “So, I frequently need to attend rather high level business dinners where I like to enjoy a glass of wine. However, I am troubled by the detritus that accumulates on the inside of my wine glass during a meal. Usually this causes no alarm, however I find myself in business discussions with a rather proper German firm, in a very formal German private dining setting. What is the proper course of action?”

Rico Gagliano: So this is the detritus, and by detritus he’s talking about the, you know, the sentiment.

Daniel Post-Senning: Well I had a question about that. I saw two possibilities, and one was yeah, the sentiment from an older bottle of wine. You don’t drink that last little sip that’s got all of the detritus in it, so you can just leave that at the bottom of the glass.

Rico Gagliano: David doesn’t say that he’s an idiot. Did we need to tell him that?

Daniel Post-Senning: So there’s a second possibility, that what’s getting inside the glass is coming from his mouth, that he’s not finishing chewing and swallowing, and that would of course be a different solution. You don’t wipe the edge of the glass. You make an effort to swallow, clean your mouth with a napkin.

Rico Gagliano: I just think you know, German or not, I don’t think anybody really cares. Are people really paying this much attention to a wine glass?

Lizzie Post: I’m not sure. It’s amazing, but sometimes when you really get into those upper levels of business and society, the things that people decide to notice… I mean, it’s a big turnoff for me when people assume that etiquette is about that as opposed to this gentleman being a good businessman, doing business well.

Brendan Francis Newnam: I can’t let this opportunity pass without sharing the story of my friend Ray who was an altar boy when he was a kid, and everyone took the communion wine. At the end, he had to take the, one of the last sips of the wine.

Brendan Francis Newnam: And he looked into the glass, and it was just filled with crud.

Brendan Francis Newnam: And as soon as it was tipped into his mouth, he just instinctively closed his mouth, and the rest of the wine poured all over his white vestments in front of the entire church. So, I’m just saying etiquette matters guys.

Rico Gagliano: Lizzie Post and Daniel Post-Senning, thanks for telling us how not to go to Hell.