Brendan Francis Newnam: Each week, you send us your questions about how to behave, and here to answer them this week is legendary TV talk show host Dick Cavett. On “The Dick Cavett Show,” his interview with celebrities ranging from Gore Vidal to Jimi Hendrix were renowned for their humor and intelligence. He was also a regular columnist for The New York Times, and he recently published a book of those columns called “Brief Encounters: Conversations, Magic Moments, and Assorted Hijinks.” Dick, welcome. 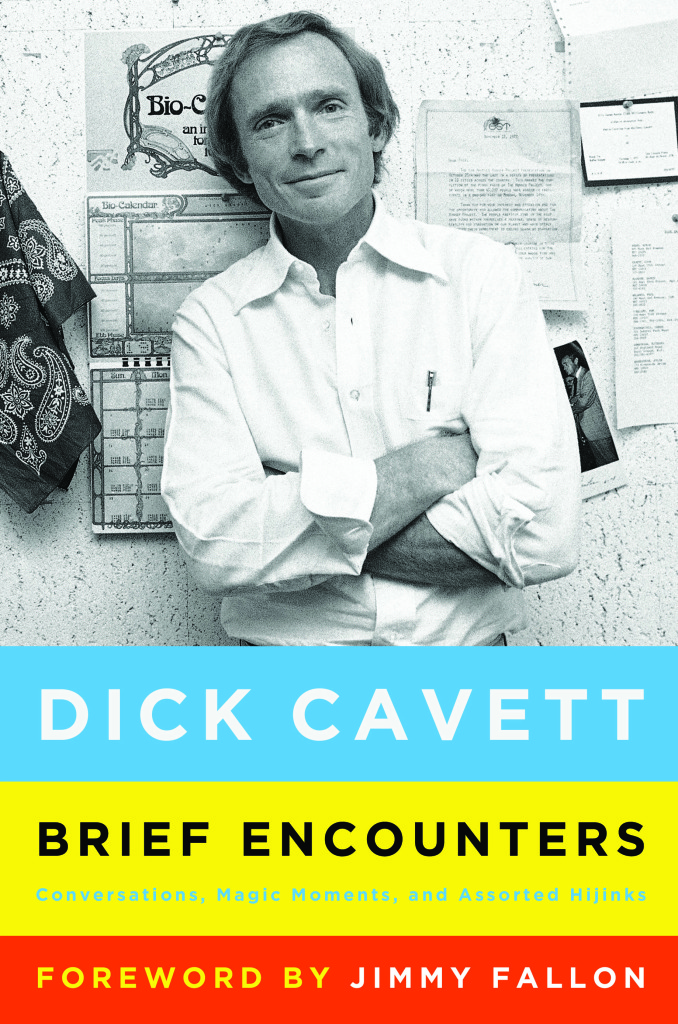 Dick Cavett: It’s nice to be here, as they say.

Rico Gagliano: It’s great to have you. Welcome back to the show.

Brendan Francis Newnam: I want to talk about this book which, you know, I have to read a book every week for our show…

Brendan Francis Newnam: This one was actually fun to read!

Dick Cavett: Well, you’re a regular Michiko Kakutani. How do you do that?

Brendan Francis Newnam: I am Michiko Kakutani! Have you ever seen us in the same place?

Dick Cavett: Not without makeup.

Rico Gagliano: So this is actually a good question, though. You have interviewed countless authors over the years. Did you always read their books? Should hosts be expected to?

Dick Cavett: I, naively, when I started, among the things I didn’t know – which was virtually everything about how the hell do you suddenly find yourself in life responsible for filling 90 minutes of television air time on a network without any idea what you’re doing – one of my naiveties was thinking I had to read the guests’ books. And the seventh time I read a 400 page book and had seven minutes with the person on the air, I realized you don’t have to read an entire book.

Dick Cavett: Yeah, I think Larry King was on the right track. You can think of enough things to say on the subject, in most cases. Although I must tell you that Mort Sahl said once, he had a book out, and he went on the Larry King Show and he claims that Larry said, “I read certain passages of your book all the way through.”

Brendan Francis Newnam: I’m tempted to go right to our questions so we could have cleverly avoided talking about the book.

Brendan Francis Newnam: But I don’t want to do that because I really enjoyed this.

Dick Cavett: Do you mean the book “Brief Encounters”?

Brendan Francis Newnam: Yes. Have you heard of it? It was written by Dick Cavett. But I want to ask. In these columns, you ask about Arthur Godfrey, Jack Paar, and some other television hosts who you knew and admired. But as a fan of your writing, I’m curious. Who were your writing mentors?

Dick Cavett: I don’t know. The only thing that I am aware of is that I had two parents and a step-parent, all of whom were excellent writers. My dad’s and mother’s letters that I’ve got, they were just brilliant. I never set out to be a writer, but I was told “This kid can write.” And freshman year at Yale, which I spent in paralysis of flunking out, I handed in my first paper to Cecil Y. Lang.

Dick Cavett: And he wrote back on it, “You have very little to learn about writing.”

Dick Cavett: And I thought, “What’s he talking about?”

Rico Gagliano: So you said, “Great, give me my sheepskin so I can stop paying you.”

Dick Cavett: Yeah, let me out of here.

Brendan Francis Newnam: He said, “Modesty, on the other hand…”

Rico Gagliano: “We need to teach you about that.”

Brendan Francis Newnam: Well, so, you obviously are qualified to answer our listeners’ etiquette questions.

Dick Cavett: Yeah, I think someone said should celery and olives be eaten with the fingers and I said no, the fingers should be eaten separately.

Rico Gagliano: You gotta live up to that now, Dick.

Brendan Francis Newnam: All right. Here’s our first question. It is Katy and she writes via Facebook: “How do you tell someone you’ve known for a while that they’re calling you the wrong name? My first name is Katherine but I’ve always gone by Katy. Now I have two different people calling me Kate. Help, please.”

Dick Cavett: I think probably the thing to do about that is just to be very subtle and say “Marsha,” or whatever her name is, the friend’s, “My name is either Kate or Katy. Which one is correct?”

Rico Gagliano: You challenge them.

Dick Cavett: And I think within the next moments, the truth might come out.

Brendan Francis Newnam: Oh, put them on the spot.

Dick Cavett: Or you can say, if her name’s Marsha, “I don’t call you Martha, you dumb butt.”

Brendan Francis Newnam: Was there ever a moment where you called someone by the wrong name on TV?

Dick Cavett: Yes, by the wrong first name, and a thousand volts went through my body as I realized it, and they looked hurt and puzzled.

Rico Gagliano: Who was it?

Dick Cavett: Well, I figure they could take it. They were president of the United States.

Dick Cavett: Not really. You know that great British joke about the man at the British elegant party and he’s talking to another man and he thinks he knows him, but he can’t be sure, and he finally, desperately says, “How’s your wife?” And he says, “Still queen.”

Brendan Francis Newnam: Yeah, don’t be in that situation.

Brendan Francis Newnam: So Katy, somewhere in there is some wisdom for you.

Rico Gagliano: I think so.

Brendan Francis Newnam: We have another question. This one comes from Jeff in Lake Ozark, Missouri. And Jeff writes —

Dick Cavett: I told Jeff never to write in when I’m on the air but…

Brendan Francis Newnam: He did it anyway. He didn’t listen.

Rico Gagliano: He has a good reason, though. Check this out.

Brendan Francis Newnam: Yeah. He writes: “Every time I see my friend John Carney, he tells me about the time he was a writer for the Dick Cavett Show. How do I get him to stop being such a name dropper. Signed, Jeff Carr, guy who knows radio personality and former writer for Dick Cavett, John Carney.”

Dick Cavett: John Carney is a name to conjure with! I’ll tell you what you do with him. Ask him what happened to the $20 I lent him.

Rico Gagliano: Still cheesed about that, are you, Dick?

Rico Gagliano: Have you got any stories that you want to embarrass John Carney with right now? That would be a great way to get back at him for name dropping.

Dick Cavett: Well, he’s bald and once in the office, he leaned against another bald man and they put their heads together and made a [expletive] of themselves.

Rico Gagliano: Have you been waiting years to tell that joke?

Brendan Francis Newnam: All right. There you go, Jeff. Use that to your, whatever advantage.

Here’s John in Pasadena, California. John writes: “How do you sidle into a two-person conversation that’s in progress and shows no signs of stopping because really, seriously, I have something to add?” writes John.

Lurking at the edge of the conversation is awkward for me.

Dick Cavett: How do you get yourself into and join and make it a three person conversation? Turn to one of the male members and say, “Your fly is open.” You know, just be, in other words, very, very tactful.

Dick Cavett: Clapping your hand over the two mouths of the two other people sometimes provides an opening.

Rico Gagliano: They want to listen at that point.

When Honey is Not Funny

Brendan Francis Newnam: Alright, well, here’s another hard one. This one comes from Christina in Los Angeles. Christina writes: “What is the most tactful way to respond if your significant other is teasing you about work in front of your colleagues and you do not find it funny. This happened to me recently at a dinner party with two other couples we work with. A laugh at my expense is fine while with friends, but I don’t know if it’s very supportive of my partner while we are socializing as professionals.”

Dick Cavett: Being, in other words, sort of bad-mouthed at the same table in front of others, by your significant other.

Dick Cavett: Aristotle speaks of this.

Rico Gagliano: Does he?

Dick Cavett: What I would do would be to be sure that I’m seated straight across the table from this unpleasant person because a swift, pointed, excruciating kick in the shin bone will often shut them up.

Rico Gagliano: Your advice is very physical today. You want to clap your hands over peoples’ mouths and kick them?

Rico Gagliano: I’ve always said that about you, Dick.

Rico Gagliano: And football plays. That’s the body of the book.

Brendan Francis Newnam: All right. That might have been your first instinct, Christina, to kick your partner, and here we have confirmation. You were right. Just kick.

Dick Cavett: So you can hear the bone crack.

Dick Cavett: There’s a quote from Shakespeare you could use. “Sticks and stones may break my bones but, well…”

Brendan Francis Newnam: Right. You know, people think that was Shakespeare. It was actually Marlowe.

Dick Cavett: Was it Marlowe?

Dick Cavett: Well, you know, the great, great Robert Benchley, unknown to anyone under 30, probably, now –

Brendan Francis Newnam: Dick Cavett, we’re out of time. Thank you for telling our audience how to behave.