Rico Gagliano: This is a hyperactive film. There are big, fast action scenes, there are characters who’re all either stressed out or pumped up on adrenaline. What is Neill Blomkamp doing on set to create that atmosphere?

Dev Patel: I mean, the film is pretty high-octane — it’s bonkers in every way, it’s a mashup of quite a few emotions and genres, and we just come into the ring and put our all into it, really.

Rico Gagliano: Although I will say in one scene there’s a massive product placement for Red Bull.

Rico Gagliano: I have a feeling that it was flowing heavily on the set, perhaps?

Dev Patel: Oh man — there is a scene where my character’s caning Red Bull whilst he’s trying to crack this code, and it was real Red Bull, and I was…I had the shakes afterward. It was crazy.

Rico Gagliano: And it just carried you through the rest of the film.

Rico Gagliano: You’ve said in the past that you’re kind of a Luddite for a young guy in the 21st century. You don’t have an iPhone, is my understanding, You don’t like texting…

Rico Gagliano: Like a lot of Blomkamp’s films, though, this movie’s kind of about humanity fusing with technology. Literally. In fact, technology is kind of your character’s savior. How do you feel about that message?

Dev Patel: For me, it’s like technology’s wonderful and it’s done so much, but at the same time, I think it’s a great shame you sit at a dinner table and people are so absorbed with their millions of apps. Or you go to a music concert and everyone’s watching it through their three-inch iPhone screen instead of experiencing the beauty in front of them. But Neill is into everything technology and he… his argument is that the next step in evolution will be machines.  That they will be a valid life form, and you know — soon every inanimate object from the table in front of me to my shoes will be interactive, you know?

Rico Gagliano: Sure — intimately interactive. In his last movie Elysium, a human’s actually transplanted with a mechanical exoskeleton.

Dev Patel: Yeah — exoskeleton, that’s pretty cool! I think they’re kind of testing that in the military right now, but that’s an incredible concept: to have a mechanic skeleton outside your body that can help you lift, run faster, take the pressure off your joints and your muscles. I think that’s really cool.

Rico Gagliano: So you’d get an exoskeleton implanted in your body, but you won’t get —

Dev Patel: Yeah, but not an iPhone! “Hypocrite!”

All right, you happen to be in another movie that’s opening this week: “The Second Best Exotic Marigold Hotel.” And your co-stars are only the biggest stars in British film and theatre. Dame Judi Dench is in this thing, Maggie Smith… what, if any advice did you get from these legends?

Dev Patel: They weren’t really on set like, “Hey you, little boy, listen to me now.” It wasn’t–

Rico Gagliano: They didn’t take you on their knee!

Dev Patel: Yeah, it wasn’t as grandiose or obtuse. It was more kind of, just being in the presence of such titans…

Rico Gagliano: What was the takeaway [from them], I guess?

Dev Patel: You know — the curiosity. They have such a curiosity. Despite their ages and despite their experience being in front of a camera gazillions of times, they’re all so curious. You know, the questions they ask.

And I spent most of my screen time with Dame Maggie Smith, and she has just a consistency with what she… she’s a scene-stealer, you know? I’m the kind of guy that’s spewing out lines a million miles per hour, and she comes in and just says one line and steals the scene. 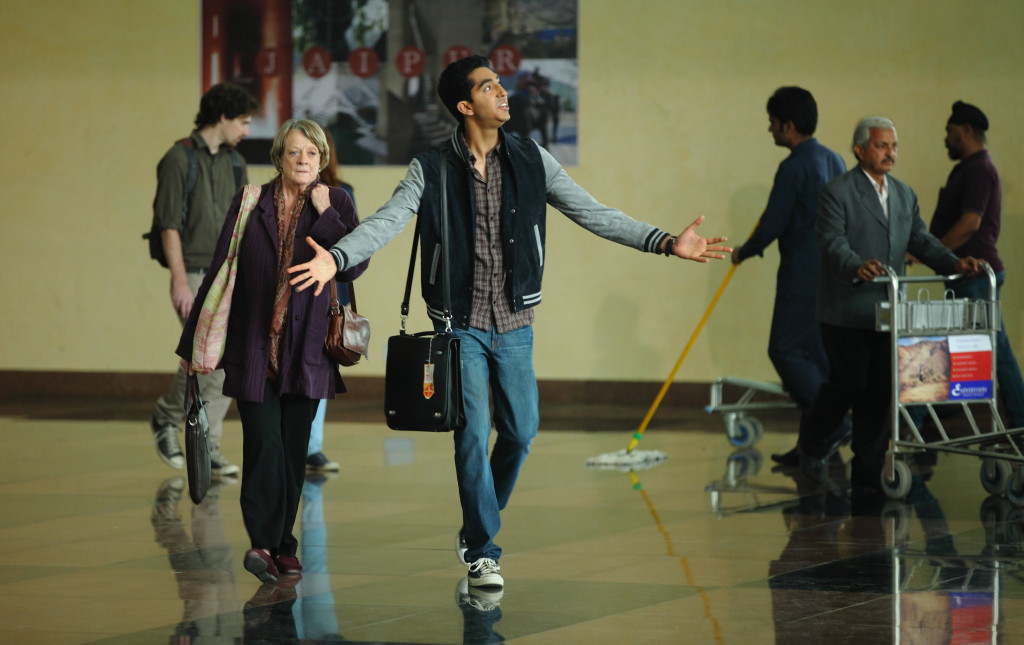 Rico Gagliano: All right, we have a couple of questions that we ask everyone on this show.

Rico Gagliano: And the first one is: if we were to meet you at a dinner party, what question would you least like to be asked?

Dev Patel: “How was it filming ‘The Last Airbender?'”

Rico Gagliano: Ha!  For those who don’t know, “The Last Airbender” was kind of a martial arts, fantasy movie you did right after “Slumdog Millionaire,” which actually did very well at the box office, but was pilloried by critics.

Rico Gagliano: I can’t even imagine what that was like — coming off something as beloved as “Slumdog” and into the reception that that film got.

Dev Patel: Well, it’s interesting because “Slumdog”… I worked incredibly hard for it, you know? But there was still something inside of me that felt not worthy of walking these red carpets at the Oscars. For someone who’s… I dunno if I was even eighteen when the film came out.. and it’s your first movie… you want to be able to test the waters.  But as an actor, every risk you take is public.

And at the time, I was getting very stereotypical type of roles — quite similar to “Slumdog” — and this role came in. I’m crazy about martial arts, I love this cartoon. And Bruce Lee was my icon. On paper it seemed incredible.  But I was very overwhelmed — you know, the craft service of “The Last Airbender” was the budget of the entire film of “Slumdog,” probably!  You know, you kind of feel very small and powerless in this big kind of machine, this big corporate machine. It was very humbling, not that I’d gotten big-headed, I hope.

Rico Gagliano: Maybe on some level it’s a good thing to have happened, to realize how fleeting approval can be.

Dev Patel: Yeah, and you know, it’s exciting coming back with a film like “Chappie” because, when I read the role, I wasn’t going to be drowned in effects and like, special effects makeup. I kind of could come in and act. He’s kind of the emotional grounding to the movie in a way. I’m not running around with guns, and things are not exploding around me. I’m quite the…

Rico Gagliano: Well, I think you have to take that back; there’s an ending sequence where there’s quite a number of explosions! 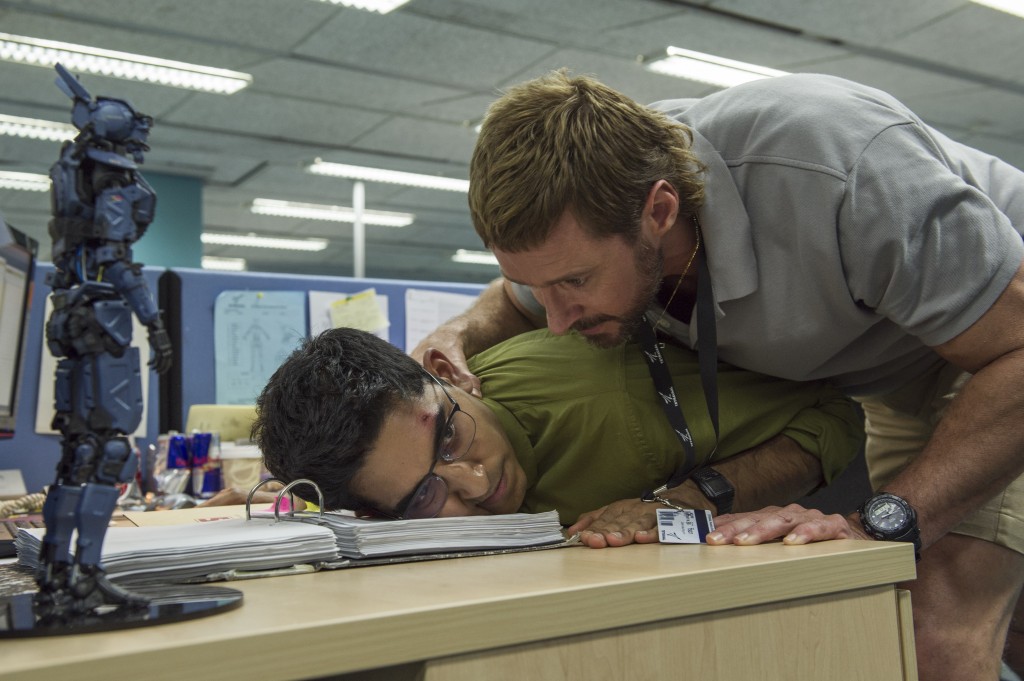 Rico Gagliano: The second question’s sort of the flip of the first: Tell us something we don’t know.

Dev Patel: Well, something a lot of people don’t know about the film is that Mr. Hugh Jackman chose his own hairstyle: the legendary mullet. I think he’s brought it into 2015 in big style.

Rico Gagliano: It is a ridiculous mullet. Hugh Jackman chose that for himself willingly?

Dev Patel: Yeah, him and Blomkamp sat down and they’re like, “How can we make this guy as eccentric and weird as possible?” But ironically, he still eclipses every other male actor on set. The women are just you know, popping ovaries everywhere.