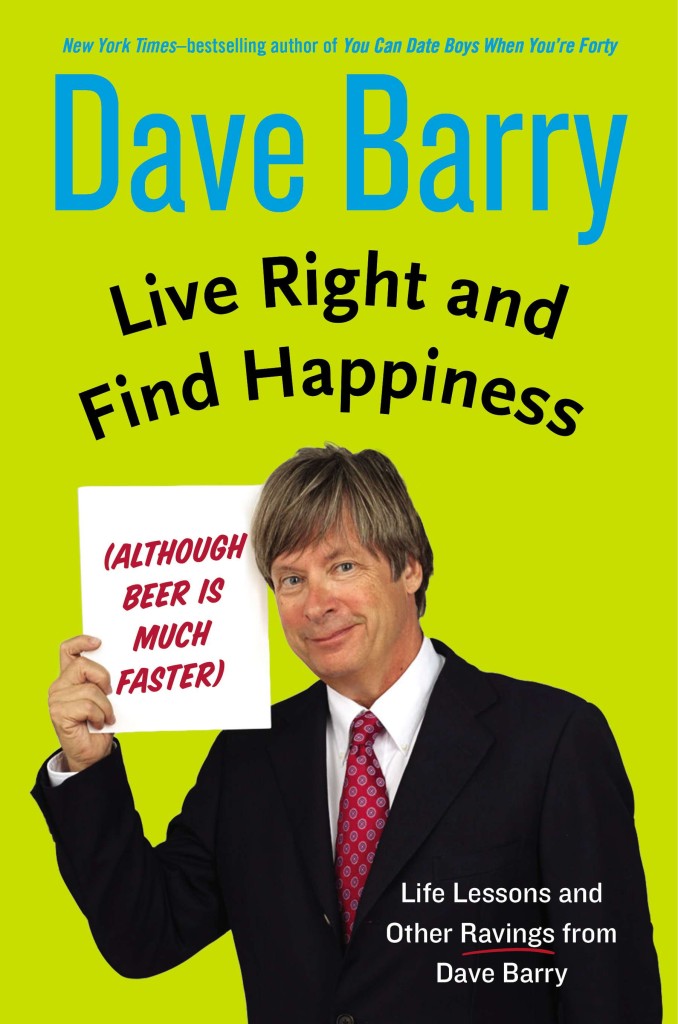 For 22 years, Dave Barry penned a newspaper column that earned him a Pulitzer Prize. Since ending that in 2005, he’s busied himself with writing bestselling novels, literary collaborations, and essay collections. His five billionth example of the latter came out this week. It’s called “Live Right and Find Happiness (Although Beer is Much Faster): Life Lessons and Other Ravings from Dave Barry.”

Rico Gagliano: Dave, welcome back to the show.

Dave Barry: Thanks. It’s good to be back.

Rico Gagliano: So it is clear from the title, this is supposedly about finding happiness, this book.

Dave Barry: Well, can I just clarify, and you really got it right. It’s my two billionth essay. I just write, you know, a series of essays and I think, yeah, these are pretty funny and I send them in.

Dave Barry: And then they want a theme so, and then this became the theme of this one.

Rico Gagliano: So the happiness angle was an afterthought, is what you’re saying.

Dave Barry: Don’t ask me to explain it.

Brendan Francis Newnam: You just undermined all our happiness questions.

Dave Barry: No, no. It’s about happiness. Well, sort of in this weird way.

Rico Gagliano: Well, let me ask you this. For a lot of people, happiness would involve not working and clearly, you can’t stop yourself.

Dave Barry: Or, I thought you were going to go to, and you clearly figured out a way to not do anything useful with your life. Nothing productive. It’s almost like radio in that respect.

Dave Barry: You sit around. No, but I can’t remember what the question was.

Rico Gagliano: The question was like, honestly. What gets you to the desk every day? Because this does require some work, I’m assuming.

Dave Barry: Well, I enjoy it. That’s really the truth. I work at home. I live in Miami and I walk out to the, across the patio.

Brendan Francis Newnam: What else would you do in Miami? I mean, just stay the hell out of the way of all the crazies.

Dave Barry: Yeah, which, I go out sometimes at two, three in the morning when the gunfire dies down. Just gets a little quiet. No, you know my tourism promotion slogan for Miami, don’t you? Okay, I’ll tell you.

Dave Barry: Come back to Miami. We weren’t shooting at you.

Dave Barry: It’s much calmer down there than it used to be. We don’t have, when I first moved there which was in the mid ’80s.

Dave Barry: This is literally true. The first time I ever got into a rental car at Miami International Airport and started driving, I passed a car with holes in the side of it and I said, what was that? And they go, those were bullet holes. And I thought, no, that’s gotta be the only car in Miami like this. No, there’s more than one.

Dave Barry: No, I haven’t seen one in years. And to be honest, I miss them a little bit.

Rico Gagliano: The question is, how did they hear you from the trunk with your hands tied? Like, I don’t.

Dave Barry: That’s the other thing. They used to routinely find cars, rental cars, returned in Miami International Airport, you know, just left in the parking lot there, with bodies in the trunk.

Rico Gagliano: Well, Dave Barry. So one thing to keep yourself happy is to stay off the streets of Miami, apparently.

Rico Gagliano: Let’s tell our audience some other things. Are you ready for these etiquette questions?

Rico Gagliano: Okay, here’s something from Cobalt in Des Moines, Iowa. Love that name. Cobalt asks, sometimes while using the ATM, I have come to quote, discover a person behind me, a bit too close for my liking, sort of invading my personal space while I’m carrying out private financial transactions. How does one make a firm yet polite request to keep some distance while using the ATM?

Dave Barry: Well, this is why I always carry a machete.

Dave Barry: You don’t have to make a big deal about the machete. I’m saying, it doesn’t have to be used.

Dave Barry: Let’s say, instead of using your finger to punch in your PIN.

Dave Barry: You just use the tip of a machete. So you just show that you have, you don’t usually with most people, you don’t have to mention it to them. Just a mild, gentle brandish of the machete and your problems are just going to evaporate.

Dave Barry: I can’t believe that anybody in Des Moines would do anything bad to anybody else in Des Moines. I just really can’t. Des Moines isn’t, they’re just being friendly.

Rico Gagliano: So this next question comes from Thirsty in Chicago. Thirsty writes, if I see that everyone else at a party is drinking beer, is it gauche to ask for wine. In this setting, is it gauche to use the word gauche? It’s a two part question.

Dave Barry: That’s a two parter. Well, first, I mean, my first issue would be what kind of beer?

Dave Barry: Because if it’s light beer, not only should you ask for wine, you should spit in their beer. What happened to this country?

Dave Barry: That’s all I want to know. What happened in this country? Light beer and low flow toilets. And they came in the same time, at around the same time. Country went straight to damn hell.

Dave Barry: But if it’s regular beer, it’s okay, I guess you could still, I would say yes, you can still ask for wine.

Dave Barry: Unless there’s a sign that says, we don’t have any wine.

Rico Gagliano: But can you use the word gauche in a beer question?

Dave Barry: I’d say after a couple of beers, you can use the word gauche.

Brendan Francis Newnam: Yeah, you need to show them.

Dave Barry: Just show them that you’re one of them. You’re not a gauche saying kind of person.

Dave Barry: That won’t have a beer.

Rico Gagliano: And after a few beers, really, you can say anything.

Dave Barry: Who cares what you say? They won’t care.

Rico Gagliano: All right, here’s something from Jack in Santa Monica, California. Jack writes, this is amazing. There’s a congregant at my church who often wears a Bluetooth earpiece. It hasn’t ever rung during Mass but the optics are weird. Is he expecting a phone call? It seems like bad taste but am I off base, asks Jack. If not, how should I bring this up?

Dave Barry: Okay, Jack may not be aware of this.

Dave Barry: This is the year 2015. If God wants to talk to somebody.

Dave Barry: And Jack’s not, the Pope himself. It’s a small one, the Pope. But if you look closely.

Brendan Francis Newnam: God may have been calling Jack all this time and he can’t get it.

Rico Gagliano: He doesn’t have the tech to receive the message.

Dave Barry: Jesus had long hair. You can’t see his ears in most pictures.

Dave Barry: But think about what might have been under there.

Brendan Francis Newnam: A little bit of a blue light.

Dave Barry: You know, it would have been a primitive one.

Brendan Francis Newnam: I’m just trying to wonder why this congregant needed his hands free. Like, why couldn’t he just.

Dave Barry: He’s praying. His hands are taken and praying.

Dave Barry: All kidding aside.

Brendan Francis Newnam: It was such a moment in time.

Brendan Francis Newnam: I can’t believe God would want to talk to those people over other people.

Rico Gagliano: He’s like, you’re kind of being a geek right now but you know what? I still have something to say to you.

Brendan Francis Newnam: I was hoping God would text. But okay.

Rico Gagliano: Okay. Dave Barry. We’re out of time. Thank you so much for telling our audience how to behave and for sharing the secret of happiness somewhere in there, I think.