Curtis Sittenfeld has made herself a fixture on bestseller lists in recent years, authoring American Wife and Prep (which The New York Times labelled one of the best novels of the year). Her new novel Sisterland lands back on bookshelves this week which follows a pair of twin sisters with psychic powers. She chats with us about staged spontaneity, not satirizing parenthood, and writing fiction that she actually makes up.

Brendan Francis Newnam: Do you believe in psychics?

Curtis Sittenfeld: My husband has told me that when people ask that, I should say I knew you were gonna ask me that. But somehow I don’t have enough fake spontaneity to pull it off. Maybe I’ll practice my fake spontaneity a little more.

Brendan Francis Newnam: Yeah, he probably could have easily predicted that I would ask that.

Curtis Sittenfeld: I know, I had a hunch. So there’s a character in the book who says there’s so many unexplained phenomena in the world that we do accept. And we don’t, there’s all this stuff that we don’t understand, and these contradictions and mysteries that we live with. And in the book, the character says basically I don’t think psychic abilities are more far-fetched than any of that.

And I feel a bit that way. Like I’m not sure that every person who identifies as psychic, is psychic. You know, according to some like widespread definition. But I, it’s not a big part of my life, or it’s not like I belong to like a psychic powers cultivation support group or something, but I’m open to it. 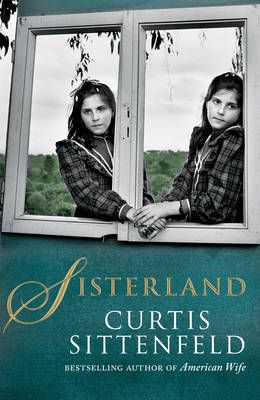 Brendan Francis Newnam: Yeah. Well I was curious about that because this is the first book you’ve written that has a supernatural element to it. And as a writer, I’m wondering, is it freeing to break out of reality, or is it overwhelming?

Curtis Sittenfeld: Well, it’s funny because I think the fact that the book has this, you know, paranormal streak, in a way made me overcompensate and make everything very plausible. So it’s a book that’s very, you know, it’s actually told from the point of view of the twin who doesn’t want to be psychic, and finds, you know, having premonitions unsettling and disturbing, and even embarrassing. And her husband doesn’t even believe in them, so he can kind of be a stand-in for the potentially skeptical reader.

But I do think that the book, I mean if you describe it in two sentences, of course you have to say a psychic makes a prediction that there will be an earthquake but really, it’s sort of more about like living in the suburbs, and being a mother of young children. Which, even as I say that, I’m like, and some people might think oh God, I thought I was interested, but now.

Brendan Francis Newnam: Well, I did want to ask you about that too. I mean, parenthood is another theme of this book. There’s a constant hum of activity and anxiety around Kate, the narrator, as she’s thinking about her children, and I was wondering if you’d made a conscious choice to kind of include many of the, some of the mundane elements of parenthood in this book?

Curtis Sittenfeld: Yeah, I would say that I did. I mean, I don’t want to sort of include them for the sake of including them. And I’ve even though, I have a two year old and a four year old, and of course I’ve spent some time in variations on mommy and me groups, and you could definitely very easily write satires of those. They’re not that had to mock.

You know it’s like when all the moms have their hands in the air doing the Itsy Bitsy Spider or whatever. But it’s like, that’s not really the book that I wanted to write. Like, it just seems, I feel like it’s too easy, and it’s not very nice. And like, I am complicit and I know like I have my hands in the air singing the Itsy Bitsy Spider too, like everyone else. I wanted to present life with children, life with small children as it really is.

And I did, there’s a prologue to the book, and then the first sentence is basically the narrator awake in the night because she couldn’t fall back to sleep after nursing her baby. And I would sometimes as I was writing, I would think to myself, have I really written a novel that starts with a sentence about breast feeding? It turns out the answer is yes, I have.

Brendan Francis Newnam: But you also kind of make Viv, the protagonist twin sister, she kind of represents the childless faction, and she has a quote at one point, she says, “Children are a problem that people create that they congratulate themselves for solving.” Where did that quote come from?

Curtis Sittenfeld: It’s funny because actually one of my, I have two sisters and a brother. One of a sisters said, “Did I say that to you?” And I thought like, give me some credit. I made that up. You know, like that came from my. I mean, again, I have two young children. They’re like, the light of my lives.

I feel like being a mother is amazing, and I also recognize that I fall into all these cliches, I’m one of those people. Like, I think that I’m the first person who ever experience motherhood. My children say the most delightful, enthralling things. So I do, I like to think that I have the ability to imagine the world from other people’s perspective.

Brendan Francis Newnam: All right, well we have two standard questions that we ask each of our guests, and the first one is, what question are you tired of being asked in interviews?

Curtis Sittenfeld: This is the question that I could live without, it’s why do you include sex scenes in your book? Which I’ve been asked since Prep first came out. I feel like that’s a pretty gendered question, that I think maybe women get more than men. To be fair towards askers of that questions, in my book American Wife, it was a fictional retelling of the life of Laura Bush. There were sex scenes, and of course.

Brendan Francis Newnam: And so people are assuming George W. Bush is half of that.

Curtis Sittenfeld: Yeah. So it would be like asking “what literary value do you think it holds to encourage us to think of George W. Bush’s butt?”

Curtis Sittenfeld: That’s a fair question. That is a fair question. Because I just felt, this is so tedious, or like it makes me feel like I come across as this lascivious person that I’m not. So I thought, okay, I’m not going to include any sex scenes in Sisterland, and they’re like all over the book.

Brendan Francis Newnam: You can’t start with breastfeeding and not have, right? Sex.

Brendan Francis Newnam: Well, let’s move onto the second thing we ask of our guests, which is tell us something we don’t know, and this can be about you, or it can be an interesting fact about the world.

Curtis Sittenfeld: Okay, I’ll tell you something that’s super interesting, but I only half-grasp it myself, so you might have to follow up with Wikipedia.

Curtis Sittenfeld: So, obviously this book is about twins. There’s a phenomenon of half twins.

Brendan Francis Newnam: Woah, what does that mean?

Curtis Sittenfeld: I think maybe it’s the same father, but the twins, the embryo splits, and then it’s fertilized by, I almost feel gross saying this, sperm, but different sperm.

Brendan Francis Newnam: Sperm’s an okay word to say. You write sex scenes in book that millions of people read.

Curtis Sittenfeld: But I don’t read them out loud.

Brendan Francis Newnam: Alright. So they don’t only have to dress half of like-