Brendan Francis Newnam: What is an ‘Upside Down Mountain’?

Conor Oberst: I guess just the idea of the human condition, and how we’re all maybe on our own little mountaintops. The old saying of, you’re born alone and you die alone, and it might sound a bit morbid, but I think it’s a good thing to come to terms with. Then there’s also this place in France, it’s like a mountain, but the oldest rocks are on the top, and the youngest rocks are on the bottom. I like that. 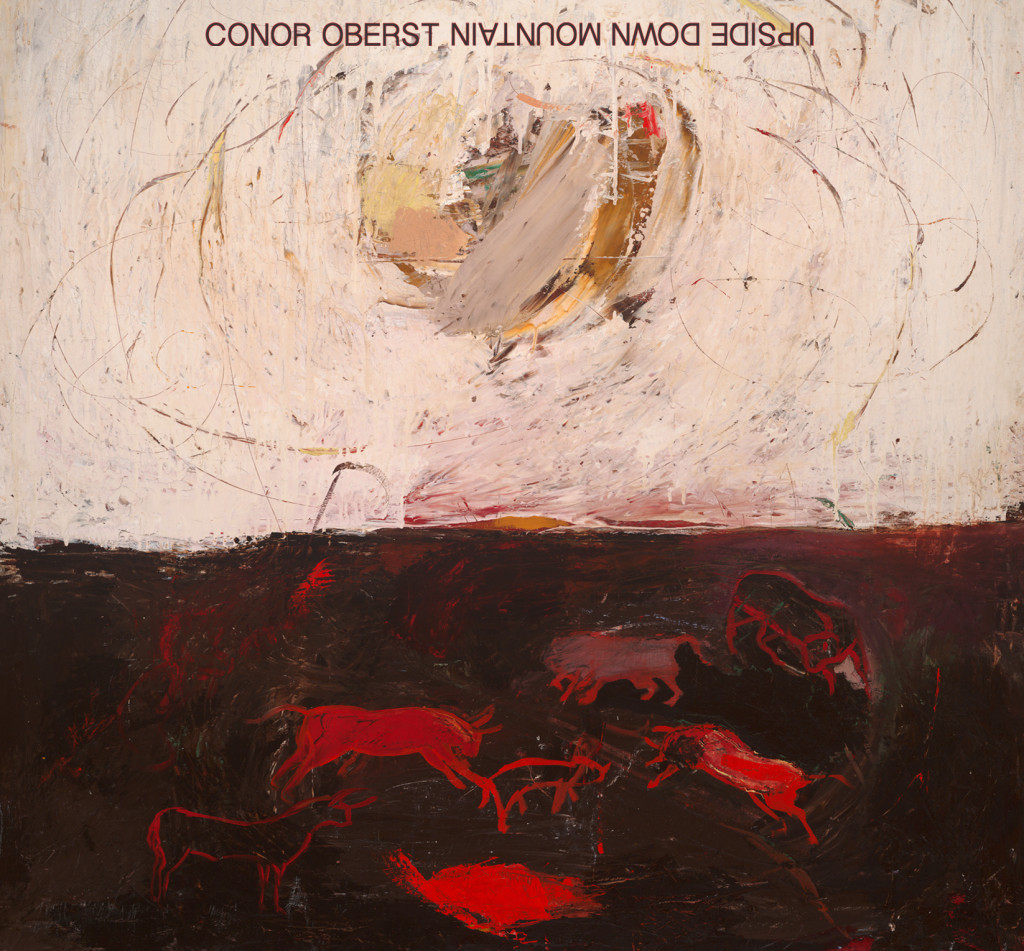 Brendan Francis Newnam: You said in an interview once that writing songs helped you clarify your thoughts. What did working on this album reveal to you? What did you learn?

Conor Oberst: Well, I don’t know that I learned much, but, yeah, I think writing, for me, is that. You know, often times I feel like I’m walking around with my head in the clouds a little bit, or just have a somewhat scattered brain. So if I can write something down that can feel like truth and, more importantly, like something I can, like, stand apart from, and look at and be like, “Yeah, to me, that is truth.” Those are my favorite moments. When I’m working on words and lyrics those are the things or feelings I’m always striving for. I don’t always get there, obviously.

Brendan Francis Newnam: Let’s play radio producer. If I was gonna bring some music up when you’re talking about one of these truths you’ve stumbled upon, is there any song in particular? A turn of phrase or moment?

Conor Oberst: Well, the song that is released now, it’s called “Hundreds of Ways.” That’s basically that idea of, no matter what is happening, no matter the chaos and everything and all the sort of negativity in the universe, you know, it’s up to the individual to find coping mechanisms. You find ways. I mean, there’s not too many choices. You can curl up into a ball, or you can exit the stage, or you can find your way through to tomorrow.

Brendan Francis Newnam: So that song has an almost optimistic chorus, although there are some cynical lines in it. But, other parts of the record are much more somber. You know, there’s a song called “Lonely at the Top,” at one point you say, “I hope I’m forgotten when I die.” There’s a lot of melancholy on this album.

Conor Oberst: I think there’s absolutely a little bit of melancholy on the album. I hope there’s also some hopeful messages or moments. Life, you know, is suffering in a lot of ways, and there’s a lot of horrible things in the world – but it’s also kind of what you make of it.

Brendan Francis Newnam: There is a lyric, something about, “I no longer am worried about if I’m gonna be bored.” Is that an overriding feeling you have now? Do you feel like the sound and fury of youth, you’ve had enough of that?

Conor Oberst: Yeah and I just think, you know, the times we live in, obviously, it’s just a never-ending distraction, and to constantly try to get away from yourself and this false connectedness that is so much the way of the world these days.

Brendan Francis Newnam: Alright. Well, we have two standard questions we ask each of our guests, and the first one is, what question are you tired of being asked in interviews?

Conor Oberst: I would say one that comes up in some form or another is essentially like, “You’ve been making records since you were thirteen, and you’ve kind of collected this loyal fan base that is often fanatical towards your work. Can you explain what resonates with them about your work?” I mean, think about that for a second. It’s like, what are your choices? Your choices are say a bunch of flattering stuff and, like, wax poetic about how dope you are, or, like, throw your fans under the bus, and be like, “They’re gullible, I’ve been taking their money for years, laughing all the way to the bank.” Or probably the truthful answer, which is, “I have no idea.”

Brendan Francis Newnam: And then an unsatisfied journalist on the other side of that.

Conor Oberst: Exactly. Or, I hope, you know, and, yeah. Obviously, I feel grateful for it, but I certainly can’t explain it. I think longevity in the music business comes down mostly to luck.

Brendan Francis Newnam: Alright, well, our other question is, tell us something we don’t know, and this can be something personal you haven’t shared in an interview, or it could just be kind of an interesting fact.

Conor Oberst: No, there’s like a new study that they did at, like, University of Kansas, which is also an extremely flat state. I think they were trying to claim they were the flattest.

Conor Oberst: Yeah, exactly. So, take a guess at the flattest state.

Conor Oberst: Incorrect, but good guess. Do you wanna know?

Brendan Francis Newnam: I guess there’s a lot of swamps.

Conor Oberst: Yeah, and it is low, it is below sea level, a lot of it. So, I think the second’s like, Illinois. The whole top five was confusing to me. Minnesota, which, you know, I think of as kind of having a lot of things going on. North Dakota, which I would’ve guessed, North Dakota, actually, that’s one. And then I think the other one in the top five was like Louisiana or something like that.

Brendan Francis Newnam: Wow. But a lot of swamps there, so I’m seeing water, right? A lot of lakes, land of lakes– interesting.

Conor Oberst: Yeah. And then, Nebraska is 19th.

Brendan Francis Newnam: Does it make you proud? Or just confused?

Conor Oberst: It’s like a relief, you know? Yeah.

Brendan Francis Newnam: Do you feel like that’s part of the reason you make an album about a mountain, because, as a Nebraskan, you feel a little insecure about your state’s height?

Conor Oberst: Maybe so. I wanna redefine our idea of mountains, you know, to make all of us in the Midwest feel a little better.