Cokie Roberts is best known to audiophiles as a commentator for National Public Radio and also a political commentator for ABC News. She has won countless awards including three Emmys. And she has also written a bunch of best-selling books including the number one New York Times bestseller, “We Are Our Mothers’ Daughters.” This month, she released a new book called “Capital Dames: The Civil War and the Women of Washington, 1848-1868.”

Rico Gagliano: Cokie it is an honor to have you with us.

Cokie Roberts: Well thank you so much Rico. And it’s a best-seller now too. It’ll be on the list this Sunday.

Rico Gagliano: Oh well, what else is new.

Cokie Roberts: Ah, it’s such a relief. Just get that over with.

Rico Gagliano: Very quickly we wanted to ask you, you started with NPR in 1978, is that right?

Cokie Roberts: Officially. I actually started in 1977, but they didn’t hire me until 1978 because they were never quick to hire.

Brendan Francis Newnam: I think that I need to change my name because we have Rico, and Cokie and Brendan — there’s not really a lot of zing to that.

Cokie Roberts: No Brendan, you need to be like Bingo or something.

Rico Gagliano: Bingo. Rico, Cokie, and Bingo would be an awesome legal team.

Cokie Roberts: And then all of the children will sing that horrible song.

Rico Gagliano: “Bingo was his name-o.”

Brendan Francis Newnam: All right. Well I’m going to take that up with my lawyers right after this conversation. 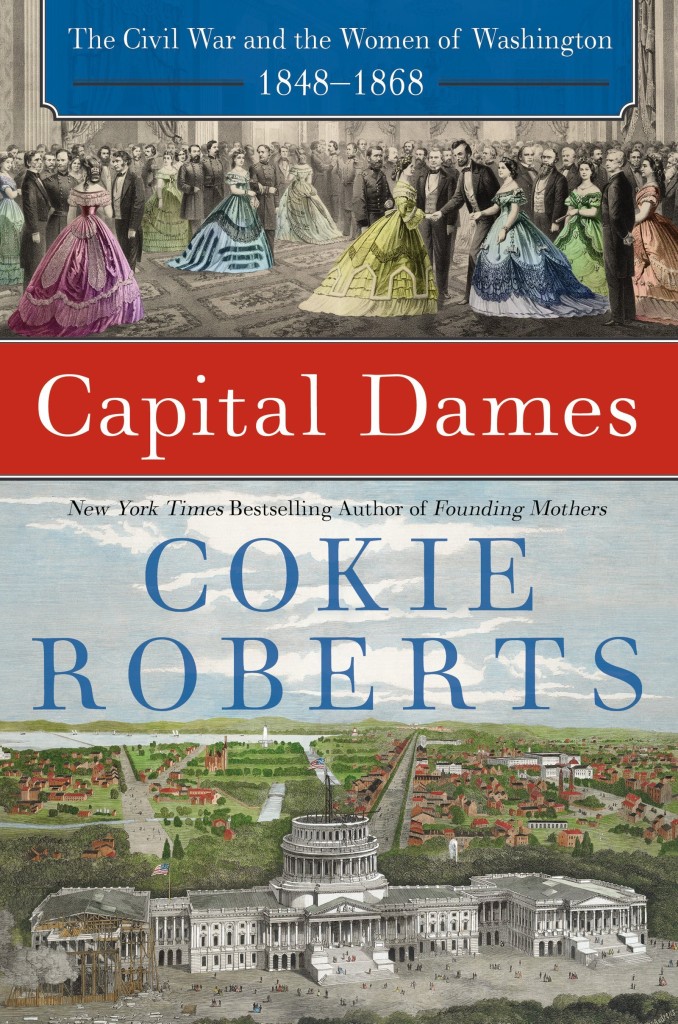 Brendan Francis Newnam: So let’s turn to this book. In it you follow several women who rose to prominence in the wake of the Civil War. I was struck by Elizabeth Keckley, a former slave and civil rights activist. But who is the stand out for you? Who is the person who stuck in your mind after?

Cokie Roberts: You know, I’m never good at the stand out because people are so different from each other. They’re people that you’d like to have dinner with…

Rico Gagliano: Well, that’s a good thing for our show. Who would that be?

Cokie Roberts: Yeah, there you go, right. Virginia Clay, who was the wife of an Alabama senator, Clement Clay. She went on after the war to be a big suffragist. She was totally fun and delightful. Most of the Southern women were women you’d want to hang with for dinner.

Cokie Roberts: No. I mean, Varina Davis — Jefferson Davis’s wife — she’s really interesting. But she, apparently, was such a great conversationalist that people all wrote about that when she moved to New York, which was a scandal after the war when — the first lady of the Confederacy moving to New York.

Cokie Roberts:  Oh, it was bad, but she ran a salon, and people loved coming because she was so interesting. So there are people like that, who you’d want to just be with, and then there are people you would admire, like Dorothea Dix or Clara Barton, who did remarkable things.

Brendan Francis Newnam: You mentioned Varina Davis who moved to New York. At one point you talk about how women were able to kind of put the bitterness of the battle behind them when the men of the South were still, I think your quote is, “draping themselves in the Confederate flag and mourning the lost cause.” Why do you think that is?

Cokie Roberts: Right. I think in Varina Davis’s case, it’s two fold. One, she kept all of her friends. She was very close to a lot of women in the North. But, secondly, she knew from the beginning that the confederacy was a lost cause and wrote it to her mother.

As she was going to Richmond to assume the duties of the first lady of the confederacy, she basically said, “We can’t win this thing.” She did her duty. She did what she was supposed to do. But then after the war, it was important to her to bring the sides together.

So, she had a very public meeting with Julia Grant, the wife of Ulysses S. Grant. It was page one news in all of the newspapers and a statement of reconciliation.

Rico Gagliano: But why do you think that women were more likely to do this than men?

Brendan Francis Newnam: You won’t have an argument with us here. That’s the name of your last book.

Cokie Roberts: I think really they don’t have to wear this big public mantel of righteous cause. They can actually tell the truth. That’s why their letters — their letters really are considerably better than men’s letters. Men’s letters are — I always joke that they’re, it’s as if they were written by those bronze and marble statues. They are…

Cokie Roberts: They say things like Stephen Douglas smells bad and they tell the truth and that’s great.

Rico Gagliano: Well this is the kind of honesty that we’re seeking from you as we pose to you our listeners’ dilemmas. Are you ready for these?

Cokie Roberts: Well the trouble is etiquette sort of requires not being honest.

Brendan Francis Newnam: Or being passive aggressive. Let’s see which comes out.

Rico Gagliano: Here’s something from Becky in Cincinnati, Ohio. Becky writes: “Can you come up with a better idiom than ‘with all due respect.’ In this day and age the subtext is almost always ‘I do not respect you, but…’ ”

Cokie Roberts: Right. This is like what we hear in congress all the time, or my esteemed colleague, right? That esteemed part they don’t mean for a second. But how about, I mean, you could do kind of modern psycho-speak. You know, you could say, “I hear what you’re saying.”

Rico Gagliano: Is that any better really? I mean I don’t buy that either.

Brendan Francis Newnam: Well I think what you point out Cokie, is that in both those instances, you’re thinking of a third party watching you speak right? Because if it’s just a one on one conversation you may not even say “with all due respect,” but if there’s an audience of voters…

Rico Gagliano: Yeah, shut up is one way that you could replace. Instead of “with all due respect,” “shut up and listen to me.”

Cokie Roberts: Well, that’s pretty — you know, in most of my professional life, I’ve been the only woman in the room and really that’s kind of how men treat you, is “shut up and listen to me.”

Rico Gagliano: This is even after a storied career like your own?

Cokie Roberts: Yeah, they just wait for your lips to stop moving.

Brendan Francis Newnam: I’m afraid to transition to the next question, lest you think I’m shutting you up.

Rico Gagliano: Oh man, but we have to.

Rico Gagliano: Here’s something from Jane in Garfield Heights, Ohio. Jane writes: “How does one express skepticism regarding the source of a person’s story, or the source of their parroted opinion without risking a heated political or ideological debate?”

Brendan Francis Newnam: I guess this would be an important skill to know in Washington, D.C.

Cokie Roberts: Yeah well this, it’s hard to not have heated debates. You could do sort of, “Really? I hadn’t heard that and I listen to NPR.”

Rico Gagliano: The only source you need.

Brendan Francis Newnam: There you go. I told you, passive aggressive works, Cokie.

Brendan Francis Newnam: “Really? Oh, I hadn’t heard it like that.”

Cokie Roberts: But I do think you could say, “Really? Really, That sounds sketchy to me. Where do you think you got that?” I think that’s a polite enough thing to say. I’m very polite. I mean I was raised in the South in an era long before you people were even thought about. So, I really do have excellent manners, and so if I would say, “Really?” I think it’s okay.

Rico Gagliano: What would Cokie Roberts do? Think that to yourself, Jane.

Brendan Francis Newnam: All right. Here’s something from Nicholas in Hesperia, California. Nicholas writes: “What should be know about etiquette if we are ever invited to a White House dinner?” Wonder why he asked you.

Cokie Roberts: Well, the first thing you should know is that you’re not allowed to refuse it. In fact, in the history book that I just wrote, “Capital Dames,” Abigail Brooks Adams did not go to a dinner at the White House. Did not cancel the previous engagement and got in all kinds of trouble, and her husband forced her to go and apologize to President Buchanan because she had breached etiquette so severely.

Rico Gagliano: Is that still the case today?

Brendan Francis Newnam: All though you might be a hero on some networks.

Brendan Francis Newnam: You could raise a lot of money for the Super Pac circuit.

Rico Gagliano: Cokie Roberts, we are sadly out of time. Thank you so much for telling our audience how to behave.

Cokie Roberts: Thank you guys, nice to be with you.