Choire Sicha, co-founder and co-editor of culture and current events website The Awl, has just published his debut book, “Very Recent History: An Entirely Factual Account of a Year (Circa AD 2009) in a Large City.”

Brendan Francis Newnam: He is the co-editor and co-founder of the popular current events and culture website The Awl, and a former editor of Gawker. His writing has also appeared in the New York Times.

His debut sort-of-non-fiction book comes out this week. It’s called “Very Recent History: An Entirely Factual Account of a Year (circa AD 2009) in a Large City.”

Rico Gagliano: A much longer title.

Brendan Francis Newnam: Yeah, a pithy title. It’s about a man named John and his 20-something friends as they work, mate and try to survive in New York during the recession, but you don’t ever call the city New York, do you Choire?

Rico Gagliano: There was a question at the end of that.

Choire Sicha: Wait, what was I just accused of?

Rico Gagliano: We’re just curious, the book is clearly set in New York City in 2009, yet you never directly identify the setting as New York City. Why is that? 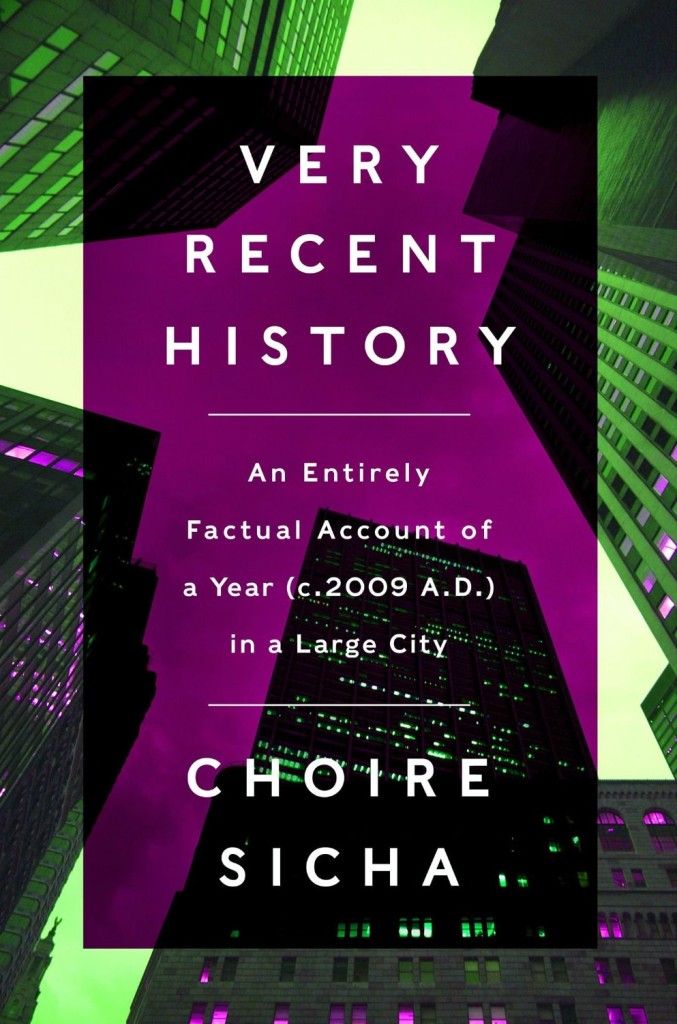 Choire Sicha: I played a ton of games in the book, actually. We never name the mayor. There’s not a single parenthesis in the book. I had a ton of OCD games I wanted to play with myself basically and I inflicted that on readers.

Rico Gagliano: Another sort of interesting mind game you play with us here is that you write as though the narrator, the third person narrator is explaining today’s world to someone who’s never seen it.

It seems like you’re pointing out how bizarre the world we live in is. What about 2009 specifically made you feel like this was the way to approach it.

Choire Sicha: I don’t know where you guys were in 2009, perhaps…

Rico Gagliano: It was an odd time.

Choire Sicha: It was an odd time. I mean, I personally was getting evicted from my apartment.

You know, when the guys who are in the book read the book when it was done, they were like, “Wow I don’t remember any of this” and I was like, “That’s probably because you have PTSD.”

It was a terrible year. It was not a good time.

Brendan Francis Newnam: Well, there was the recession.

Rico Gagliano: There was definitely the recession.

Choire Sicha: Which was pretty brutal in New York City.

Brendan Francis Newnam: And you’re journalist and the media, the world was rapidly changing.

Choire Sicha: It was rapidly falling off a cliff, certainly, yeah. And then we immediately, it’s like they say when you have a baby you immediately forget about what that was like so you can have another baby.

If you remembered what childbirth was like, you would not do it again, and that was the recession. We were like, “Well, that was messed-up. Let’s forget about it entirely.”

Rico Gagliano: And some are saying we are laying the groundwork for doing it again.

Choire Sicha: Yeah. Shortly, actually. I would give it a year and a half.

Brendan Francis Newnam: Well, in this book you spend a lot of time thinking about the modern condition, so maybe you can help our audience with their dilemmas in the modern world.

Rico Gagliano: Alright, we’re going to start with one from Annalise in San Antonio, Texas.

Annalise writes: “If you have a guest spend the night over at your place, is one being a cheapskate to make them coffee or breakfast at the house or should one at least make the offer to take them out for a bite and hope they don’t take you up on it? Grad school just doesn’t give us budgets for these kind of things.”

Choire Sicha: This is like a fascinatingly revelatory question, don’t you think?

Choire Sicha: In what locality does one say, “Hey, let’s go out for breakfast after sleeping together?” I don’t think I’ve ever experience that and I’ve slept with a lot of people.

Brendan Francis Newnam: I think that’s what she’s hinting at, though.

Choire Sicha: If they’re just a house-guest they can get breakfast on their own.

Choire Sicha: I think the answer is sort of about whether you want to have the “guest” with you again.

Choire Sicha: But I definitely think for the vast majority of us who are addicted to substances, bringing someone coffee before you make them leave your house is a really nice thing to do.

Rico Gagliano: Sure, but I’m not quite sure I understand the question. Like, cooking somebody a breakfast is a very nice thing to do. The indication here is that one’s being cheap.

Choire Sicha: Yeah, and I think it’s so sweet. I think if someone made me breakfast I’d just stay.

Rico Gagliano: You’d be a roommate?

Rico Gagliano: So Annalise, coffee at least, and breakfast if you need someone to share your rent.

Brendan Francis Newnam: Onto a question from Richmond, Virginia. This is Laura.

Laura writes: “If I’m going to a wedding out of town and sharing a hotel room with a couple, should I be expected to pay for 1/2 or 1/3 of the room?”

Choire Sicha: Guys, isn’t this like the worst? Or just drive off a bridge? What should happen in this case is the couple should pay for her to stay in the hotel room with them.

Brendan Francis Newnam: No, it’s true. They should, because she’s lonely.

Choire Sicha: Totally, they should be like, “Listen you’re going to watch us wake up together and kiss.” That’s worth the cost right there.

Brendan Francis Newnam: But I had this happen recently at a restaurant. I split my meal with a couple and it wasn’t until afterwards I realized like, wait a second, they ate for two.

Choire Sicha: This is the thing that happens a lot, too. We go out as a couple with other couples and then maybe a couple singles and then we’re like, “Here’s three credit cards for the three entities,” which is horrible. That’s gross couple behavior.

Rico Gagliano: Alright, so either you pay for a third of the room, Laura or the couple pays for your end, but don’t let them get away with less.

Rico Gagliano: Here’s something from Zigis in NYC and Zigis writes: “Single space or double space after periods?” Perfect for someone who’s an editor.

Choire Sicha: So, this actually comes up a lot in my work. I get a lot of writers turning in things with double spaces and I’m like, did you learn on a typewriter? This is an old thing from typewriters, right?

Choire Sicha: Mostly, this is people who learned on typewriters. Did you learn on a typewriter?

Rico Gagliano: Maybe I did learn on a typewriter. I think it looks better.

Brendan Francis Newnam: What did the double space do? Why on a typewriter?

Choire Sicha: I believe it had to do with kerning?

Rico Gagliano: It usually does.

Choire Sicha: What doesn’t? There’s a little visual space there with the font, which occurred on typewriters.

Rico Gagliano: Well, why doesn’t that apply to computers?

Choire Sicha: Because we use other fonts rather than mono-spaced fonts. We could talk about this all day.

Choire Sicha: Yeah, so this is a bad habit. Now, it doesn’t matter because on the web if you have a double space, it’ll eat that. It won’t actually exist.

Rico Gagliano: I have noticed that. If you publish something online it turns double spaces into single.

Choire Sicha: Unless you force double-spacing, it won’t actually happen, so you know what? This is something we worry about a lot for no reason.

Brendan Francis Newnam: And also we have a new nickname for Rico. Double Space, which is great.

Rico Gagliano: Thanks, you guys.

Rico Gagliano: Choire Shicha, thank you for telling our audience how to behave, even if it didn’t rub off on Brendan.

Choire Sicha: You guys are the best, I can’t even stand it.