Celebrity chef, restauranteur, and star of cooking/reality shows Bobby Flay dropped out of high school and worked on a stock exchange floor before opening seventeen restaurants, earning a Michelin star, and integrating the word ‘chipotle’ into the American lexicon.

He is particularly known for his expertise over a grill; in fact, five of his eleven books feature “grill” in their titles. His newest, “Barbecue Addiction” — inspired by the Emmy-winning television show of the same name — is out this week.

Bobby Flay: This will definitely be the first time that anybody asked me how to behave. I’m just gonna tell you that straight out. That’s never happened in my life.

Rico Gagliano: You’re a bad boy, are you?

Brendan Francis Newnam: Don’t you have to keep order in the kitchen?

Brendan Francis Newnam: You know, I think you will be able to give guidance to people, even looking over this book, at one point you declare, “If you use lighter fluid, you’re fired from the grill.”

Brendan Francis Newnam: So let’s start there. For the millions who still use lighter fluid: what’s wrong with lighter fluid?

Bobby Flay: Cause it has an awful taste. We all grew up as kids eating hamburgers that tasted like lighter fluid. We actually thought that that’s what they tasted like. They don’t

Brendan Francis Newnam: It’s like, I used to think spinach was just frozen, wet-paper-towel texture, from my mother. Then I learned that it actually can taste good.

Rico Gagliano: I have a personal question by the way. I have, I feel like I’m not, kind of, enough of a guy because I don’t grill. 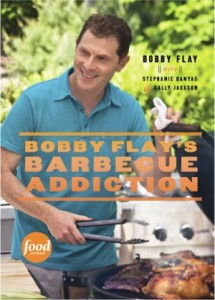 Rico Gagliano: Thanks Brendan. But, like, I don’t have two things, which is space and time. I’m just sort of dissuaded from getting into this.

Bobby Flay: Well, I’m gonna have to cut you down on both of those excuses. Because I feel like if I have the time, you’re probably gonna have the time. And it doesn’t take a lot of space to grill. I mean, how much space do you need? Do you have any outdoors? You live in LA.

Rico Gagliano: I know, well, it’s true, but I live in an apartment, you know? Not a ton of space.

Brendan Francis Newnam: Okay, but you could set up like a little Weber on your driveway, right?

Rico Gagliano: But is that gonna be any good? I mean it’s a tiny little doohickey.

Bobby Flay: Let me just say this to you: grilling is common sense cooking. It’s flame with some grates over it.

It doesn’t matter what the outside of it looks like. Some of them are you know, $5,000 and looks like you can drive them down the block, and the there’s the classic Weber – and they basically get the same results.

They’re not cooking it, you are. And that’s what people, I think, get intimidated by.

Brendan Francis Newnam: I think Rico, when he was complaining about time, was trying to make a case for lighter fluid. We’re just not gonna have it.

Bobby Flay: That’s not happening, because in 15 minutes, if you have a chimney starter – which costs like $12 in the store – you can have perfect coals lit. Perfect.

Training Tongues to Take the Heat

Brendan Francis Newnam: All right, well we’ve told Rico how to behave. Let’s answer some of our listeners’ questions.

The first one comes from someone calling themselves Tongue Fried in Southern California.

Tongue Fried writes, “I’m a spice wimp. Example, when this local Mongolian barbecue place asked me to specify spice preference from 1-10, I asked for a zero. No joke. This is a source of great shame. What should I do when I literally can’t stomach food I’m offered. Related, any secrets to building tolerance to that kick?”

Bobby Flay: Well there’s no substitute for experience in anything, and that includes eating spicier foods. There actually is a point where something might be too spicy for anyone, including myself, and I eat a lot of chili peppers and whatnot.

Bobby Flay: It serves Thai market food. It is insanely hot, okay? So you eat it, you’re like, “Oh my goodness, this is so hot.” And then you wait for like 30 seconds, and what do you do? Put the fork back into the food and you start eating it. And  what happens is, you just sort of almost kind of need it.

It’s almost like this good drug, something that you actually start wanting even though it’s actually kind of hurting you a little bit.

Brendan Francis Newnam: Well what’s interesting is, you know, you’re famous for bringing spices into food. But you’re like me, we have an Irish background. I always joke that I have Mediterranean taste but an Irish stomach, and I get killed.

I guess what Tongue Fried’s also asking, if you encounter something you just simply can’t handle, what’s a polite way to pass on it?

And what happens is people, when they eat something that’s too hot, what do they do? They drink a lot of water or beer. Wrong. You need dairy. Yogurt or some milk, that’s what works.

Rico Gagliano: So if you’re going to a Thai place, pack a milkshake.

Brendan Francis Newnam: All right, there you go Tongue Fried.

Rico Gagliano: Here is Damon via Facebook. We don’t know where Damon is from.

Damon writes, “Our office frequently takes part in potlucks. Lately I’ve gotten a lot of push-back, through the grapevine of course, that my dishes have meat, gluten, cheese, etc. Am I on the hook for creating dishes that meet everybody’s potluck preferences?”

Rico Gagliano: One would think.

Bobby Flay: First of all, gluten-free is a very serious issue. People have you know, celiac disease and they have to be careful, obviously.

But I was watching the Today Show this morning, and now there’s this South Beach gluten-free cookbook and now it’s become a trendy thing to do. I have to say – I mean I’m not a nutritionist or dietitian by trade – but I don’t like the idea, because you’re not gonna be getting the nutrients that you need.

For people that are deciding just to do it because they think it’s the trendy thing of the moment, it drives me crazy.

Rico Gagliano: I also have to say that I feel like chefs, of course this is their art, you know, they want to have as wide a palate to work with as possible. Does that trump politeness, I guess is the question?

Bobby Flay: You know, listen. As a chef, I mean we’re cooks, we’re servants. We’re making food that people are paying to eat. So the customer is obviously very important, and I think if somebody wants something that’s gluten-free, I’m not gonna question why it is. It’s not my place. I’m not gonna say well, “I’ll make it only if you really can’t eat it.”

Bobby Flay: You know, I cook with a lot of cilantro, and some people have an aversion to cilantro. A lot less than they used to, but when I opened Mesa Grill 22 years ago, I had the most people with cilantro ‘allergies’ in the history of the world in my restaurant. I was like,”Just tell me you don’t want it and I’ll cook without it.”

It’s totally fine.  I think you have to find the balance. 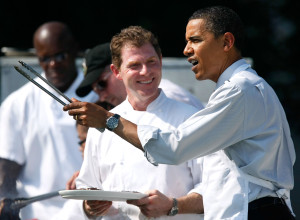 Brendan Francis Newnam: And also, I think this is a potluck, right?

Brendan Francis Newnam: Everyone brings in a pot.

Bobby Flay: Don’t eat that one.

Brendan Francis Newnam: And that’s luck of the draw. Just eat something else. Stick with the Pirate Booty or whatever you want.

Bobby Flay: I’m gonna eat the one that that guy brought, I can tell you right now.

Brendan Francis Newnam: All right, Damon, you have a fan, if Bobby’s invited.

Rico Gagliano: There you go.

Brendan Francis Newnam: All right, we have another question. This one comes from Allie in Minneapolis. Allie asks, “What do you do when you’re a guest at someone’s dinner party and the food is terrible, and they ask what you think because, you know, you’re Bobby Flay, and they want to hear compliments?”

Rico Gagliano: It’s like, you never look fat in that dress.

Bobby Flay: One thing I can tell you right now: whether it’s a chef or somebody cooking at home, no one wants to hear the real story. “Tell me really?” “It’s great. That’s what I think.”

Rico Gagliano: All right, here’s Jeff via Facebook. Jeff writes, “How do you get people to leave at the end of the party? Please help, they are still here.”

Bobby Flay: “Thank you for coming everybody. Good night.”

Bobby Flay: I mean… That’s a great question actually. Because we’ve all been there. But there is a point where your guests are not being polite.

Brendan Francis Newnam: When I worked at a cafe years ago, I had a special mix I called my ‘go home music.’ That’s basically when the metal would come on.

Brendan Francis Newnam: Yeah, that’s when the Ozzy Osborne was turned up.

Bobby Flay: “I want you guys to listen to the vocals.”

Brendan Francis Newnam: Well, Bobby Flay, thanks for coming by and telling our audience how to behave.

Bobby Flay: Sure. Thanks for having me.