Rico Gagliano: Carol Leifer has been nominated for four Emmys for writing TV comedies like “Seinfeld” and “Modern Family.” She is the co-executive producer of the show “Devious Maids” on Lifetime, the second season of which premieres on April 20th. This week sees the publication of her latest book, “How to Succeed in Business Without Really Crying.” Carol, welcome.

Carol Leifer: Thank you! I’m so impressed. You got every one of those credits correct. 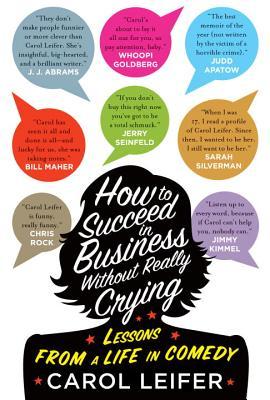 Rico Gagliano: We do our research. This book is a memoir about how you rose to the top of the boys’ club of stand-up comedy and of comedy writing, but it’s also an advice book about succeeding in any profession. What is maybe the one essential rule of success that you find people rarely live by?

Carol Leifer: I think it’s being tenacious. You really do have to have very thick skin and let things roll off your back — I mean, my back is practically teflon-coated by now. That really, to me, is the ‘big secret.’ Just keep moving forward.

Brendan Francis Newnam: That’s how we got you on the show, Carol. By being tenacious.

Brendan Francis Newnam: Here you are. Thank you for saying yes. You can sign my teflon back later.

Rico Gagliano: And you really had to be tenacious, of course. When you started, there were very few women in comedy writing.

Carol Leifer: Yeah, but I always saw it as an advantage, because I knew that being different that way would pique the audience’s interest. I advise that to women in whatever business they are in: use that to your advantage.

Rico Gagliano: But wouldn’t it have been seen as a disadvantage at that time? That people might not have wanted you to be in a room of all dudes writing?

Carol Leifer: Well, the great thing about women is we make up 50% of the population.

Brendan Francis Newnam: So it gives you an advantage when you’re working on comedy…

Carol Leifer: Exactly! Certainly on something like “Seinfeld,” pitching the idea that Elaine thinks the mirrors at Barney’s are skinny mirrors. I mean, it was doubtful that a man was going to pitch that idea, because that happened to me. In that way, I think women always have to use what makes us different to our advantage.

Brendan Francis Newnam: All right — you give advice in the book, are you ready to give some to our listeners?

Asking Company to Ditch the Kicks

Brendan Francis Newnam: Our first question comes from Liberty in Denver. Liberty writes: “Is there a good way to ask people to remove their shoes before entering your home? I thought a shoe rack, complete with some shoes but enough space for more, would send the slightly passive-aggressive message, but it doesn’t. Why do people think it’s such an imposition to ditch their kicks? I feel like a jerk every time I utter, ‘Oh, would you mind leaving your shoes by the door?’ Help!”

Carol Leifer: I think that, yes, passive aggressive won’t work with that. I think you just have to simply ask people. I mean, I’ve been asked by people, “Would you mind removing your shoes?” and I don’t mind. If that’s how they want to roll…

Brendan Francis Newnam: See, I mind. First of all, what about the hygiene of your feet? Maybe you came from the gym earlier in the day or something and didn’t have a chance to change, and now all of a sudden you have to disrobe? It’s embarrassing.

Rico Gagliano: It makes you feel like you’re in a security line.

Carol Leifer: And yet, you are in their house.

Brendan Francis Newnam: But they’re my host. I’m the guest. Shouldn’t it be like a ‘customer is always right’ type of thing?

Carol Leifer: Yeah… no. I think the guest is never right. Guest has to defer.

Rico Gagliano: I do have to say that most of the continent of Asia would have a problem with you not taking off your shoes in their homes.

Brendan Francis Newnam: Well, they haven’t invited me over. If they come to my house, they can take off their shoes all they want. It just seems like it should be your option to take off your shoes.

Carol Leifer: No. I have to say to Liberty: say so right at the door.

Carol Leifer: Aggressive-aggressive. If they don’t like it, they can take a hike, with their shoes.

Rico Gagliano: Here is something from Patrick in Columbus, Ohio. Patrick writes: “I have a friend who floods my inbox with spammy messages about puppies, chain letters, etc. I don’t want to block the friend entirely, because some of this person’s emails are relevant and personal. How do I correct this behavior?”

Carol Leifer: You know, this has actually happened to me. Too many emails from somebody. What I’ve done, because as you can tell I’m not for the passive-aggressive approach, is I like to send them an email like: “I love getting emails from you, but I have to be honest, I’m so swamped these days and getting so many emails.  So if you wouldn’t mind just filtering out the really super important ones, I would so appreciate it.”

Rico Gagliano: Plus that makes you seem like you’re super-important and busy, getting so much email.

Brendan Francis Newnam: But what if the friend is like, “No, this is super important. This kitten is eating ice cream with a panda!”

Carol Leifer: Well, then you just have to block them.

Brendan Francis Newnam: You know, I see a twinkle in your eye as you’re telling us this answer. Who is this person? Was Jerry Seinfeld sending you these emails?

Brendan Francis Newnam: He’s all business. Alright, Patrick in Columbus, there you go.

Brendan Francis Newnam: I like that. That wasn’t even aggressive, it’s just straight-forward.

Rico Gagliano: …and a little self-aggrandizing.

Picking a Safe Seat for Comedy

Brendan Francis Newnam: So this next question comes from J.D. in San Francisco. Question is: “As I’m sure you know, some comedy clubs decide where you’ll be seated. I’m not a fan of being put near the front. It’s like there’s a sign on my forehead that says ‘talk to me.’ Things get nerve-wrecking and it’s hard to enjoy the show. Any tips for how to claim a seat outside the state lights?”

Carol Leifer: Well, no, not really. Why wouldn’t J.D. just say to the person seating, “I do not want to be up front” and if that’s the only place they have, just go to the 10:30 show?

Brendan Francis Newnam: You have a unique perspective on this because you spend a lot of time on stage doing stand up. Do you engage the people in front into your work?

Carol Leifer: You like to.  And people don’t realize this is the great thing about stand up – you can engage personally with the person right in front of you.

Brendan Francis Newnam: But has someone ever been frightened? I feel like I’m pretty confident, but some nights you just don’t want to be part of the act.

Carol Leifer: A lot of times you don’t. Or, a lot of times when you want people to be quiet and enjoy the show, you get people who can’t wait to be in the show, throwing out anything and everything.

Carol Leifer: Yeah.  I had a gentleman once who was doing a very funny little voice in the audience, heckling me. It made me so mad. So I said, “If you want to come up here and do a better job…” And then he said he couldn’t come up, because he was handicapped and in a wheelchair. And the funny voice was coming from a voice box because he had lost his larynx.

Brendan Francis Newnam: Oh no.  Did you just walk off, drop the mic?

Carol Leifer: That was, basically, like, “OK, sorry folks. Good night, everybody.”

Rico Gagliano: One situation where you should not be tenacious — just give up. Carol Leifer, thank you so much for telling our audience how to behave.

Carol Leifer: I hope I helped.