At age 23, Brie Larson is already well into the second act of her career. The former musician – personally signed by no less than Tommy Mottola – has gone on to appear in movies like “Greenberg,” “The Spectacular Now,” and “Scott Pilgrim vs. the World” (in which, fittingly, she played a rock star). She  stars in the acclaimed “Short Term 12” which won the Grand Jury and Audience Award at the South by Southwest Film Festival, and is now available on DVD and streaming services.

Rico Gagliano: Could you summarize your role in “Short Term 12”?

Brie Larson: Oh sure. I think the easy way to explain it is that I play a line staff at a foster care facility for at-risk youth. But it’s kind of more complicated than that I think.

Rico Gagliano: Absolutely. And your character of course is not without her own troubles.

Brie Larson: But of course. So it is kind of about someone who’s supposed to be a mother figure who also needs help herself.

Rico Gagliano: The hard part here though to get across is that this movie is really funny at times. But it obviously takes on a lot of difficult issues. It seems like it could have been a really fraught atmosphere on that set.

Brie Larson: It wasn’t. It was the most loving and most fun and most laughs I’ve ever had on any set.

Rico Gagliano: Well how did that happen?

Brie Larson: I don’t know. I think about it now and I just think that the only way we could have gone to those dark places was that we weren’t living it. We came out of it at the end and there were smiles and hugs and lots of support afterwards.  Otherwise I don’t think that we would have felt comfortable.

There’s also kids, you know. They have this incredible ability to go into the character and then come out of it right away. The second you yell “cut,” they’re not those characters anymore. And the second we told them there was an ice cream truck outside they just fled! They don’t care about the scene anymore.

Rico Gagliano: Now on the other hand, there are moments in this that feel almost documentary. What did you do in a given day to create that atmosphere where that could happen? I mean, were there times when the cameras were just roaming around and you were left to your own devices? 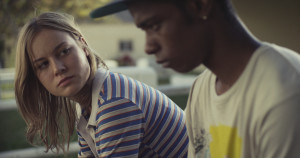 Brie Larson: Yeah. There were times when for me, most of my day was getting to work and then putting my headphones on, and listening to Norwegian black metal and getting myself in this sort of like intense negative tizzy where I… that’s the feeling that I had in my head.

Brie Larson: Yeah, it was. It’s really intense, but then it became this contradiction of me trying to battle what was going on in my head and what was happening in a scene where I had to be a caretaker. And in order to create that, they would sometimes just put… like, a lot of the group therapy sort of scenes, they would just have the kids in the room — [The kids] would just think that we were just setting up the camera. I wouldn’t even be in the room, I’d be in the other room listening to something awful, and Destin would just come in and say “Whenever you feel like it,” and then I’d just go into it.

Rico Gagliano: Destin, by the way, is writer and director Destin Daniel Cretton.

He worked in a facility like this. He experienced what it’s like. But there’s reality, and then there’s good storytelling and acting.  Was there a point in the making of this where you were like, “I know this is how it really went in real life, Destin, but emotionally this doesn’t make sense?”

Brie Larson: Yeah, there were a few times. I mean, anytime there was sort of a confession in the film, especially the one towards the end that Grace gives… I was terrified of it.  Because you spend all this time playing somebody who really has the inability to communicate, and you fear that giving some sort of speech about the specifics of their past… instantly an audience member’s gonna go, “Oh gosh, here we go.”

So by the time we actually hit those scenes, Destin was the one that was like, “I don’t know, I don’t know about this.”

And that confession scene, after feeling like maybe we were gonna cut it without even trying, we did one take and Destin was like, “Oh! Actually I might be a better writer than I realized.” And I think that was the take that’s in the movie.

The first question is, if we were to meet you at a dinner party, what question should we not ask you? What is the question you kind of least want to be asked?

Brie Larson: What attracted you to the script of “Short Term 12”?

Rico Gagliano: Did I ask you that?  I can’t remember.

Brie Larson: No, you didn’t.

Brie Larson: I would like to talk about anything, anything other than the specifics of the film. ‘Cause I’ve never gone to, say, a magic show and then stayed afterwards to watch a Q & A because I want to know how he did it, you know?

Rico Gagliano: This is the paradox of being involved in the arts though, isn’t it? You go and at some young age you think that it’s magical, and you want to know how they pull it off, and then you learn, and then it’s like watching sausage get made. It’s never the same.

Brie Larson: Yeah!  But I think that it’s the artist’s responsibility to make sure that the magic is saved. We’re doing a disservice to it by constantly cutting it down and showing what’s happening behind the curtain. We don’t have to.

It’s very easy for me to say, “I just don’t talk about that.” You know, we can talk about a lot of things. I watch a lot of Khan Academy videos, you want to talk about the Renaissance? That’s more interesting I think, than hearing me talk about–

It’s just like an online school. And they just have all these great videos and they have everything from cosmology to ancient arts and… math if you want to learn algebra again.

I don’t have stock in this company, I just really love it.

Rico Gagliano: Also the name Con Academy sounds like it’s a school to become a criminal.

Rico Gagliano: Well let me ask you our second question — you sort of already answered it — which is “Tell us something we don’t know.”  I didn’t know about Khan Academy, but perhaps there’s something else that you’d like to share that maybe blows peoples’ minds at a dinner party?

Brie Larson: Well there’s a few things I found out recently that I’ve kind of been plagued by a little bit. Maybe there’s somebody out there who can contact me in some way and help me feel more comfortable with these things.

One, I found out that they’re changing the DNA of the orange.

Brie Larson: I think this is a conspiracy you guys — why isn’t anyone talking about this? There’s this thing called “greening.”  It’s this virus. The orange trees, there’s like two and half million of them have been hit by this virus where they don’t grow, they just kind of stay green. So they’ve had to find a new strain of DNA, and now pretty much all oranges are gonna be genetically modified.

Brie Larson: It seems like it. I mean from… the article was in the New York Times, and the way that it was posed was that it looks like there’s really no other option at this point. The epidemic that might happen, you know… people might have to switch to apple juice, it would be so terrible… that we’ve just got to fix it.

I was also reading about these lobsters that are eating each other. There’s a rising cannibalism.

Rico Gagliano: Brie, these are terrible things to talk about at a dinner party.

Brie Larson: Well lobsters are already eating each other. Why can’t you eat them?

Rico Gagliano: Well, cause they’ll all be gone. There will just be one mega-lobster left.

Brie Larson: Yes, exactly. My friend was like, “This is terrible. They just realized how good they taste, and now it’s all over!”