Brendan Francis Newnam: In addition to acting, you’re known for being a cinephile. How would you describe “Skeleton Twins”?

Bill Hader: I would say it reminds me of the great films from the ’70s, you know, where it’s like a character drama. It shows very complex people, but it doesn’t really judge them. You know, movies like “Five Easy Pieces” comes to mind, where you’re kind of watching Jack Nicholson’s character, and then you’re slowly kinda unpeeling layers to him, and kinda realizing what kind of person he is, but at the same time, like “Five Easy Pieces,” it’s kind of a weird crowd pleaser.

Brendan Francis Newnam: So, on the one hand, this movie is a shift for you from comedy, which you were famous for on “Saturday Night Live” and in Judd Apatow films and other things, to drama. But it sounds like you’re kind of a student of drama.

Bill Hader: Well, I loved, I wanted to be a filmmaker. I always wanted to be a director. That was kind of the thing, you know? I would watch and would notice the same guy who did “E.T.” also did “Raiders of the Lost Ark,” you know? Actually, the first one was the guy who did “Animal House” did “Trading Places,” and I went, “That John Landis? Okay. Wow!” He did “American Werewolf in London,” that’s the same name at the end, and so, I would go to video stores as a kid and I would just, my eye would immediately go to who directed it.

Brendan Francis Newnam: Your eye didn’t immediately go to like “Star 80” and those video boxes with the very attractive people?

Bill Hader: Oh, I would look at “Star 80” and immediately go down to, “Bob Fosse directed it, okay, what else did he do? Oh, he did ‘All That Jazz,’ I love that movie.”

Brendan Francis Newnam: You really were a cinema nerd then.

Bill Hader: Yeah. Big, big cinema nerd, and so, I went through my youth just wanting to be a director. And then what ended up happening was, making films, I found I didn’t have the patience for it, and a lot of people were telling me that, you know, “You should try acting.” This was about 2004 when I decided, like, “Okay, I’m gonna start taking improv classes and get up on stage.”

Brendan Francis Newnam: So, when you accept a role in this movie or other movies, do you immediately think of other performances, and do you watch other films while you’re prepping for a role like this?

Bill Hader: No, you know, what I actually do is I think of people in my life, and, you know, Craig Johnson, the director and co-writer, he sat and walked me around the block and told me my character’s whole back story, and then you get on set and you’re just immediately, just, you have all this kind of information, and now you’re just reacting to people in the moment, you just react to what the other performer’s doing. 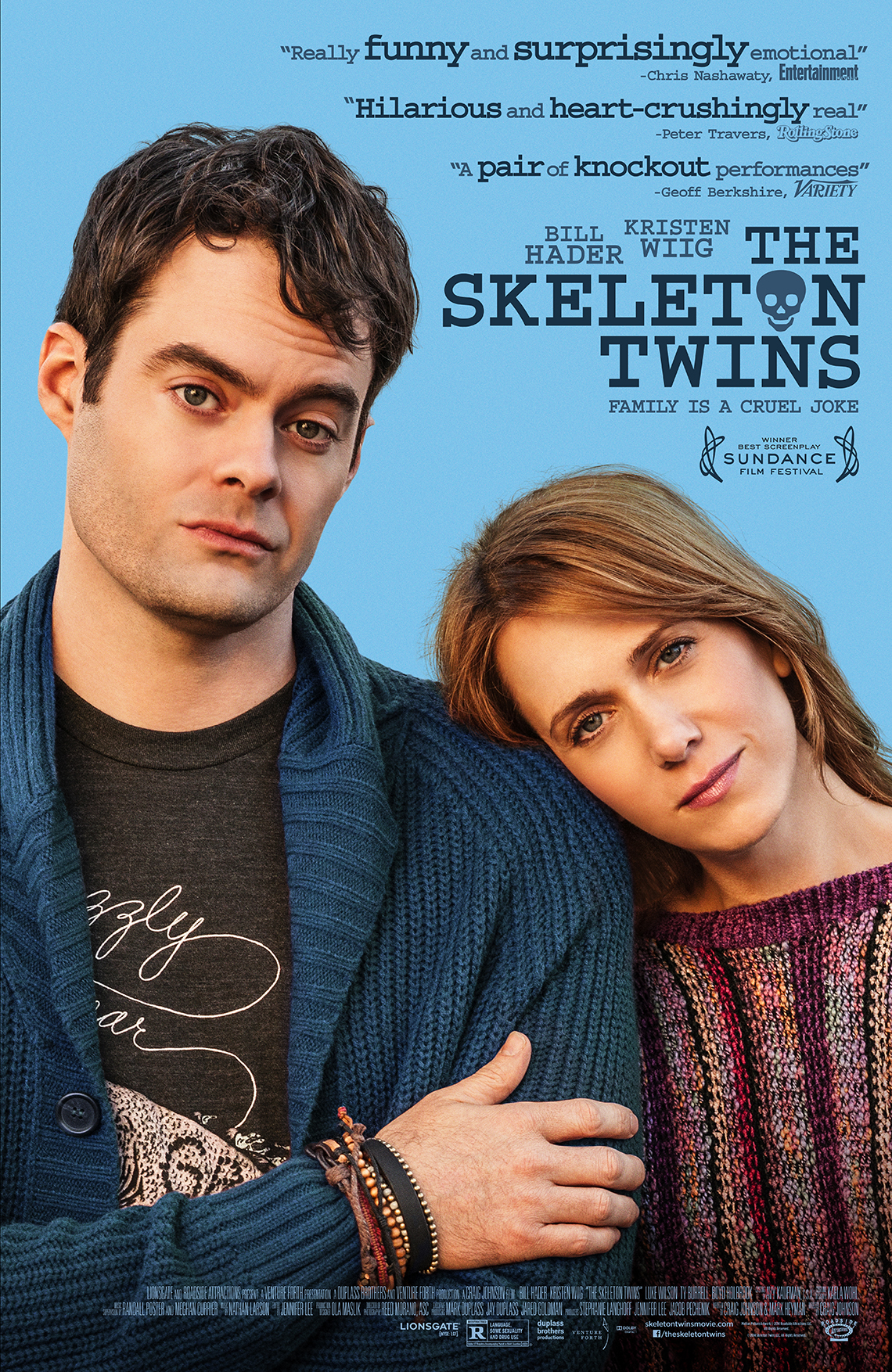 Brendan Francis Newnam: Well, it sounds like you had a lot of background, but I think what’s kind of remarkable about this performance is kind of this shift in your body language, the character’s countenance, the way he moves. How did you arrive at Milo and the physical part of his performance?

Bill Hader: To be honest, I didn’t think about it that much. You do it at “Saturday Night Live,” a little bit, but this, it was going much deeper. But, I don’t know. You just project a vision of somebody, and then you just try to fake that. That’s probably why I don’t like watching myself because, in my head, I have this vision of what the character is, and then I watch and I go, “Oh, it’s just me with my dumb eyes and my weird voice,” and I get bummed out.

Brendan Francis Newnam: While I was preparing for this, I came across your performance on James Franco’s roast as the president of Hollywood, which is absolutely hysterical. You’re the president of Hollywood, you’re this old executive in a tracksuit who’s kind of telling everyone why you gave them their careers, from Jonah Hill to Seth Rogan. But at one point, you mock Bill Hader. Did you write that line, and were you feeling that way at some point with kind of the roles you were being offered?

Bill Hader: I did write that line, but it was more of just, I felt the perception of me from people, which isn’t wrong. I always say, I’m the guy who says the title of the movie. “Maybe you should forget Sarah Marshall.” You know? I’m always the guy saying the title of the movie, which isn’t bad. The reason I did a character in that was because I’m not comfortable doing standup. I’ve never been a standup comedian, I much prefer to play a character. And then, it was a nice thing because I got to go after myself and nail myself, you know, and that line got a big laugh.

Brendan Francis Newnam: So, we have two standard questions on our show. The first question is, what question are you tired of being asked in interviews?

Bill Hader: “Will there be a Stefon movie?”

Brendan Francis Newnam: They crave it, they want it?

Bill Hader: Yeah. People want it, and I’m always saying, “It was barely a sketch!” It lives on Update. We tried to do Stefon as a sketch and it didn’t work, so I don’t think a movie would work.

Brendan Francis Newnam: Right, no “Stefon: The Movie.” Second question is, tell us something we don’t know, and this can be a personal piece of information that you haven’t shared in an interviewed, or it can be an interesting piece of trivia.

Brendan Francis Newnam: As an adult?

Bill Hader: No, when I was in high school. No, when I was in middle school. I grew up in Tulsa, Oklahoma, and football is a very big deal in Oklahoma, and I was inordinately tall for my age, and broad-shouldered, and I think people were telling my dad, like, “You better get on that, Bill, come on.” My dad’s name is Bill, too. So, “Hader, you better get on your son, he’s big, you know, get him out there, get him playing football.” And so, I went to football camp.

Bill Hader: I was like, “You guys wanna watch ‘Rosemary’s Baby?’ I got a VHS of ‘Aguirre,’ ‘Wrath of God,’ and I got my mom’s cappuccino machine. You guys wanna eat some biscotti?”

Brendan Francis Newnam: And then they just clobbered you.

Bill Hader: Yeah, they were just like, “What’d you say?” That’s why I had a hard time watching the show “Friday Night Lights,” because I was always waiting for Kyle Chandler just to look right in the camera and be like, “Hader, run some hills.”

Brendan Francis Newnam: It rattled you inside.

Bill Hader: It rattled me. Him saying, guys saying football like that, literally, I feel like, my heart stops for a second. I’m just like, “What, what, what?” I just kinda just look around like I’m about to be punched.