Rico Gagliano: In the 1970s and ’80s, Rock & Roll Hall-Of-Famer Alice Cooper pioneered what came to be called “shock rock,” lacing his live shows with real pythons, fake electrocutions, and all manner of horror movie imagery. For the record he did not kill a live chicken on stage, but the fact that everyone believed he did says something… 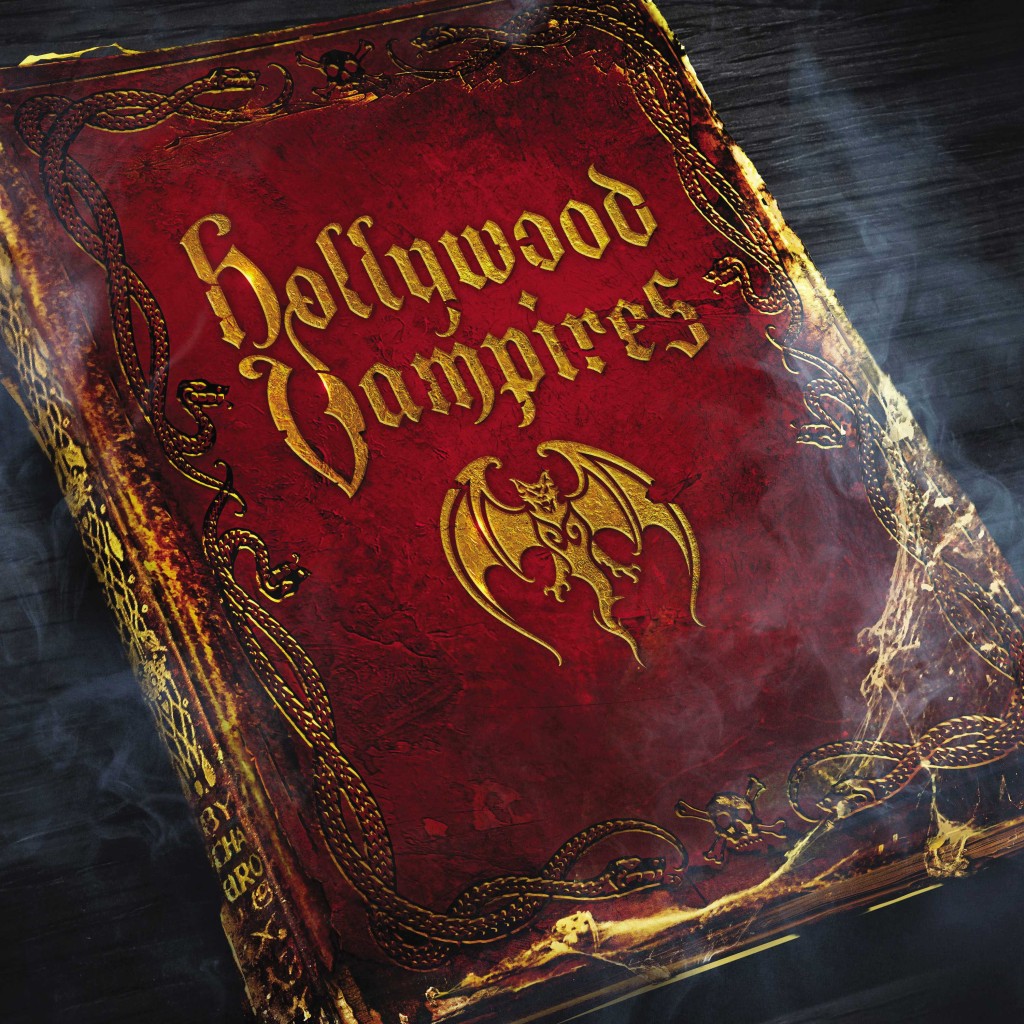 Rico Gagliano: … Alice has since done perhaps the most shocking thing, by becoming an upstanding restaurateur and golf maven while still rocking out. He’s been opening for Mötley Crüe on their farewell tour, and he’s got a new band: The Hollywood Vampires. They are named after Alice’s crew of musician pals, back in the ’70s, who drank together — often to excess. This new band features Johnny Depp, Aerosmith’s Joe Perry, and a slew of guest musicians. Their album comes out next week, and Alice it’s great to have you.

Brendan Francis Newnam: It is sad, but tell us a little bit about this crew of musicians. Most of them hung around at the Rainbow Room, which was a storied bar on the Sunset strip back in the ’70s.

Alice Cooper: Well, in New York it was Max’s Kansas City — that was the place. And London it was Tramps. And then Los Angeles it was the Rainbow, and it was just sort of a drinking club, you know? And it was all guys that just happened to be at the top of their game at the time. So every night we’d get there, and there’d be Harry Nilsson, Keith Moon, if John Lennon was in town, he would come with Harry Nilsson…

Rico Gagliano: Yeah, they were pals.

Alice Cooper: …Micky Dolenz, Bernie Taupin, the same guys almost every night. And then we just kind of said, “Boy, everybody died. Why don’t we do an album just kind of like, to tip our hats?”

Rico Gagliano: There’re many hours worth of stories you could tell about this group, obviously. Maybe could you regale us with one great story that comes to mind?

Alice Cooper: Well yeah, I mean we would get there a little bit early because everybody wanted to see what Keith Moon was going to wear that night, you know.

Alice Cooper: One night he would show up as full-out Queen Of England. And I’m talking full out.

Brendan Francis Newnam: He was a maniac. All these guys lived hard, but Keith Moon in particular was a maniac, I’ve heard.

But with all of his insanity you had to look at him and go, “This guy is still the best drummer in the world!” And he was everybody’s best friend. He’d come over and he would stay at, you know, Harry’s house for like two weeks, and then he’d come over to my house for two weeks.

My wife and I came home one time, and he’s in the house, and he’s dressed as a french maid. And he’s like, [French accent:] “Oh, I am so sorry, I have been dusting ze house all day!” And my wife is like “Who is this guy?” And I said, “He’s the greatest drummer in the world, leave him alone.”

Alice Cooper: No, but he was really sweet. He was the sweetest guy in the world, he really was.

Brendan Francis Newnam: So this record is mainly covers of song from, you know, that original crew of Hollywood Vampires, with a couple of originals. When you set about making the album, what was the first song you knew you had to cover, and why that song?

Alice Cooper: Well, I think for John Lennon we did “Cold Turkey.” Only because it was really appropriate to. He had his problems with not just alcohol, but he had some drug problems too. And he did go through cold turkey, and that song was just one of those songs that was kind of chilling.

Brendan Francis Newnam: You were a huge Beatles fan as a kid, right?

Brendan Francis Newnam: So Paul McCartney plays on this album, John Lennon was one of the original Hollywood Vampires… I have to put you on the spot here: are you a Lennon or a McCartney guy?

Alice Cooper: Well I was, you know…. John was the guy that tried to always get me into politics. And I told him, “I am not politically incorrect, I am politically incoherent.”

I hate politics with every ounce. I said, “Politics and rock and roll don’t belong together,” and that was the argument right there, you know, because he believed that the voice of rock and roll was political. And I said, “No, it’s entertainment.”

Rico Gagliano: “Let’s just have a beer for God’s sake!”

Alice Cooper: I was! I was the moderator between these two.

Brendan Francis Newnam: And you share the same last name as Anderson Cooper, so that makes sense.

Alice Cooper: A. Cooper! Me and A. Cooper have a lot in… wait a minute, no we don’t.

Rico Gagliano: But as a less political guy, can we take that as meaning you’re more of a Paul McCartney guy?

Alice Cooper: Yeah, McCartney was much more of a fun guy. I sent Paul McCartney one time… I went to his house in Scotland. And he was building this great big room, that was a meditation room. It was a big round room, and I just happened to have this gigantic round bed that Groucho Marx gave me, right?

Alice Cooper: And so I said, “I have a gift for you Paul.” I sent this bed to him, and the note with it said, “Neither one of us had any luck with this bed. Good luck!” And he says he still has it in the house.

Rico Gagliano: But wait, can we just take a step back, though? Are you saying Paul McCartney has Groucho Marx’s bed in his meditation room?

Brendan Francis Newnam: Who could get it next, Kanye?

Alice Cooper: Yeah, somebody’s going to get it.

Rico Gagliano: I think it has to be Kanye.

Alice Cooper: Whoever gets that bed in the end is really going to have a great keepsake.

Rico Gagliano: Sure — there’s a lot of legends going through that bed.

Brendan Francis Newnam: I read about this friendship you had with Groucho Marx. Talk about that — that sounds outrageous from the outside. How did you become friends with him?

Alice Cooper: Well, Groucho came to see one of our shows, and he says, “Alice is the last hope for vaudeville.”

Alice Cooper: But which was absolutely right! I mean it was like, probably the most correct description of our show. ‘Cause it was sort of a horror-vaudeville kind of show. But he would bring George Burns, Jack Benny…

Alice Cooper: And then the next night — yeah — he would bring Mae West and Fred Astaire. Oh yeah. You know, they would be standing be standing at the sides of the stage, they wouldn’t be at the front.

Rico Gagliano: So they didn’t get blood on them.

Alice Cooper: No, but you know, George Burns would say [does George Burns impression], “Gracie and I played Toledo, you know, and in 1923 we saw the guy do the guillotine like that. He didn’t use the snake.” They were not in the least bit shocked by anything that I did.

Rico Gagliano: Were you aware that there was this kind of tradition when you were assembling this show? Was that what you were after?

Alice Cooper: Well, I’ve always been a bit of a vaudevillian. The idea of us being a sideshow; I connected with those guys. In fact, there were bits from “Hellzapoppin‘” and movies like that that I said, “Ooh, we should use that in the show!”

You know, Fred Astaire saw the dancing skeletons we had that disappeared and appeared, and he goes, “That’s great. We should have used that.”

Alice Cooper: You couldn’t have had a better compliment than that for us, you know? And Jack Benny’s going [in a Jack Benny voice], “Alice, everything I pick up’s got your picture on it! It’s ridiculous!”

Brendan Francis Newnam: Well I understand Jack Benny being there, because he was never over 35, so…

Brendan Francis Newnam: He was always a young man.

Alice Cooper: But, you know, it’s funny. Like, even Mae West… we did a movie with Mae West called “Sextette.” It was Keith Moon and Ringo and myself. The worst movie of all time, but at one point she said [does a Mae West impression], “Why don’t you come back to my trailer?”

Rico Gagliano: Regardless of age, that’s an honor, to be hit on by Mae West. That’s amazing.

Alice Cooper: But then I found out she hit on every single guy in the cast.

Brendan Francis Newnam: Good for her!

Alice Cooper: So I wasn’t singular at all!

Brendan Francis Newnam: You were named after Damon Runyon.

Brendan Francis Newnam: And Damon Runyon wrote about, you know… “Guys and Dolls,” the musical was based on Damon Runyon’s stories.

Alice Cooper: Absolutely. There was tons of “Guys and Dolls” in our shows. We used parts of that, parts of “West Side Story,” there was all those things that showed up in the Alice Cooper shows.

Rico Gagliano: And yet I remember in the seventies you were seen as the end of culture. But you were basically taking pieces of all of these aspects of beloved culture of the past.

Rico Gagliano: Did that upset you at the time? It’s kind of like, “Listen you guys, I’m part of a tradition.”

Alice Cooper: No no no. I mean, to just about every parent in America we were indescribable. They didn’t quite get the humor of it yet.

You know, I was getting… like, Ann Landers was like all over me for a song called “Cold Ethyl,” which was a song about necrophilia, right? But it was funny. It was a funny song! And I finally wrote her back and I said, “Ann, if there’s a rash of necrophilia going on because of this song, I will apologize.”

“But,” I said, “everyone’s laughing except you.”